I have written about my old neighbors once or twice.  They moved away, though, in 1985.  The people who moved in to the house had two boys who were both younger than my brothers and I.  As such, we had limited interaction with them.  In 1990, though, I would do some babysitting for them.  When looking for something to do with them, I found a small cache of G.I. Joe toys in their basement.  They were from 1988 and later and were relatively unfamiliar to me.  I remember a shell of a Tiger Fly: which I recognized as a Dragonfly repaint.  But, most of the other toys were in pretty bad shape.  But, one day, they had gotten some new toys when I was watching them.  We were playing outside under a hemlock bush with some new figures and vehicles.  The one new toy, though, that caught my attention was the Locust helicopter.

This little brown copter was right in line with the type of flying vehicle that I loved in the final years of my Joe playing days.  It was small, compact, loaded with weapons and had an easily accessible cockpit.  In short, it was the perfect type of vehicle for vast types of aerial based combat.  It could easily be held in one hand while it attacked the figures on the ground.  It could hold it's own against the Night Raven and Mamba drones that comprised the entirety of my Cobra air force at the time.  And, the exposed cockpit allowed for the dramatic death scenes that were integral to any aerial combat adventure.  I really wanted to get one.  But, I wasn't really buying toys then.  So, I filed the Locust away for a later time.

When I started collecting in earnest in the late 1990's, I was focused on filling many of the holes in my collection that started with items I recognized from the years after I was buying toys.  Figures like Big Ben and Metal Head were key acquisitions.  I tracked down a Hammer: which proved to be one of the biggest disappointments of my collecting life.  But, I never managed to get any version of the Locust.  For some reason, I never really spent time searching for one despite wanting to get one.  I'm not sure why this was.  I spent so much time building my figure collection that vehicles were a secondary concern.  Even with the addition of better Cobra aircraft like the Firebat, I never had occasion to seek out the Locust.  I even acquired a beat up General as a throw in with a lot of other 1990's figures.  (Things like that happened in the late '90's.)  But, the Locust wasn't included.  And, as Hasbro started releasing more toys in the 2000's, the Locust just got overlooked.

With one now in hand, though, I find that my memory of the Locust is stronger than the actual toy.  Sure, it's still compact and well armed.  And, the canopy/cockpit is in line with what I remembered.  But, my older, wiser self has yet to really find that sense of wonder that burst through when I first saw the Locust back in the fall of 1990.  It may come in time.  But, things like the Razor Blade have helped dull the appeal of the Locust.  But, this General version of the copter looks nice with a variety of figures.  And, it's rather seldom seen.  So, it's possible that I'll use it in far more photos than some of the items that replaced it.  I've just been disappointed.  But, considering I built the toy up in my head for more than three decades, there was little way it was going to live up to the hype I created for it.

Truth be told, though, there isn't much to the Locust.  1990 started the transition to more molded vehicles instead of the model type kits we'd seen in prior years.  So, the Locust just has the guns, missiles, canopy and skids.  There is a swiveling tail rotor.  But, it's, as far as I can tell, the first chopper with such a feature where the rotor doesn't actually spin.  In 1990, Hasbro experimented with a clip to hold figures into place.  On some level, they're useful since your figures didn't flop around in the toys.  But, I've found them to be terrible as they impede putting figures into the vehicles and can damage figures today.  The Locust has one to hold the figure in the slightly oversized cockpit.  Without it, the inside of the chopper is great.  But, it's an intrusive feature at best.  The only other real feature is that there is a bomb dropping feature underneath the copter.  There is a little door that will open up to drop two additional yellow missiles onto Cobra targets.  It's not much of a play feature.  But, it's something and foretold of the action features that would become essential to all vehicles made after 1990.

The Locust was released at retail in brown and in green and yellow with the General.  Neither are particularly hard to find.  It was rare for vehicles in the 1990's to get a repaint.  So, the fact that there are two Locusts is a oddity.  I won't argue that the General version is superior to the retail release.  As, I do think the brown and silver version is superior.  But, this General version offers bursts of color that make it more visually interesting.  And, it better complements the figures from 1991 and later while the retail version is a nice match for other 1990 Joe releases.  In 2000, Hasbro reused the Locust name on a tan repaint of the Dragonfly.  This Locust is a great toy.  But, it has no bearing on the original.  It's sad that there was no place for little vehicle like the Locust in the 2000's.  I think a lot of small, generally overlooked vehicles could have found a nice second life during that time.

One of the things I'd really like to do in 2023 is learn to take aerial photos of Joe toys.  The aircraft are such an integral part of the line.  But, there's only so much you can do with photos of them on the tarmac.  There are lots of little tricks and tips to get flying shots.  And, I want to spend some time next year learning a few and then working on showcasing toys like this Locust in their intended environment.  In the sky, you can better visualize the purpose of the smaller flying machines.  And, getting some of the well known tricks down would really help breathe some life into photos for toys like the Locust.

It's surprisingly easy to find mint and complete versions of this Locust.  It's even easier to find parts.  So, it's possible to spend about $40 to have a General version of the Locust shipped to you.  But, it's also possible to put one or two together from cheaper lots of parts.  It seems that Generals tended to get damaged and thrown away while the Locusts were saved.  And, that's the likely reason it's easier to find this helicopter than it is to find an unbroken General.  The retail Locust is both cheaper and more common, though.  So, depending upon your color preferences, that might be a better way to go if you want a version of the Locust.  Be on the lookout for drooping cannons and be sure you get 4 missiles.  Personally, I wish either version had been available to me when I was a kid.  Having it as a collector just isn't the same.  But, it's still a great little toy that's well worth tracking down. 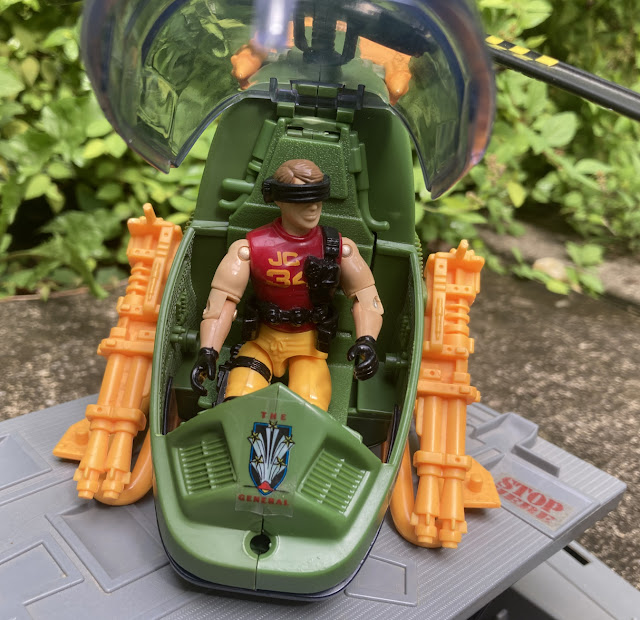 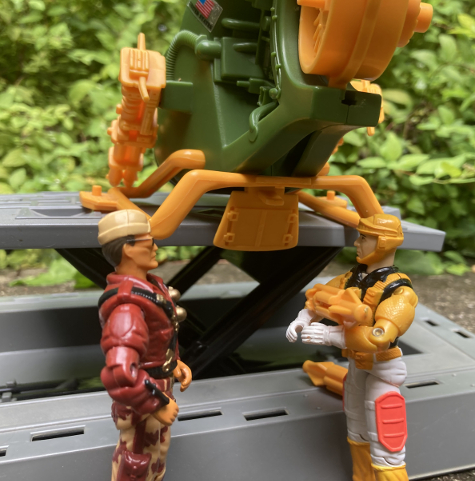 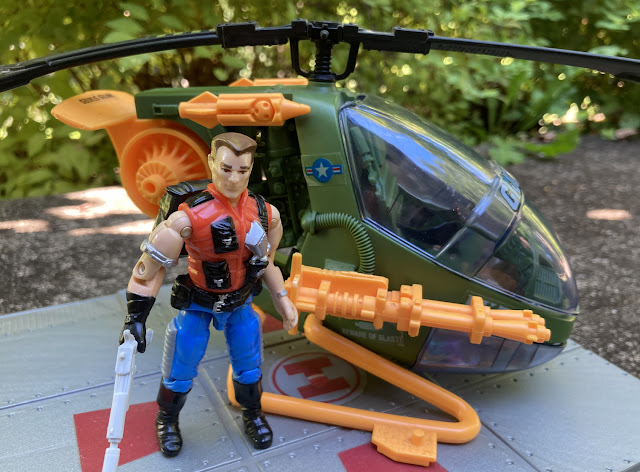 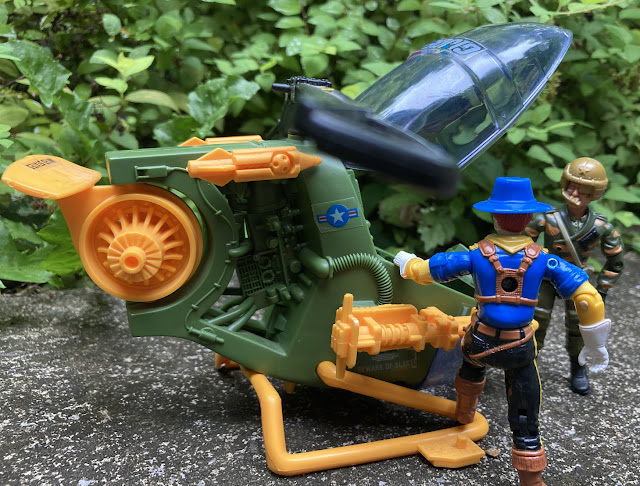 Posted by Robot_Sonic at 1:03 AM
Email ThisBlogThis!Share to TwitterShare to FacebookShare to Pinterest
Labels: 1990, Locust, Major Storm, Vehicles