I don't much care for Duke.  Not being a cartoon guy, Duke never really resonated with me.  His comic character was rather bland and there were far better characters for any adventures.  His original figure was cool enough.  But, it also felt like a retread since it reused accessories and even mold parts from other figures.  Among the class of 1984, Duke felt like an anachronism.  And, as such, he rarely found a role in my collection.  In fact, Duke's most memorable contribution to my childhood was the donation of his parts that were used on other figures.  My favorite being a new Hawk that used a Duke's chest that I had repainted.  But, you can't deny Duke's importance to the Joe mythos and his place of prominence among collectors.  So, his inclusion among the first 6 of the Hasbro Pulse releases makes sense.  And, while I'm not a fan of the Duke character, this new rendition of him accomplishes some things that failed Hasbro from 1997 through 2005.

Duke has been re-released a ton of times.  But, none of those Duke figures really lived up to the version that appeared in the cartoon.  During the 1990's and, to a lesser extent, the 2000's, Joe fandom was heavily skewed towards the Marvel Comic.  As such, Hasbro was steered away from any cartoon homage figures.  In the ensuing decades, though, this has changed as more and more cartoon fans have come into the fold.  Now, there's a pretty even split.  And, the cartoon has proven to offer some nice designs for toys.  Super7 has mined the cartoon mythos very deeply and produced some figures that are unlikely to ever appear in any form again.  What's sad is that Hasbro could have done this very easily in the 2000's.  It's a shame there is no cartoon accurate Baroness, Snake Eyes, Cover Girl, Flint or any other cartoon rendition of your favorite character.  But, this Duke and Cobra Commander release of 2022 takes a step towards rectification.  Both figures are based on their cartoon appearances and include cartoon inspired accessories.  It's probably 20 years too late.  But, cartoon fans finally have some figures that are inspired by their favored medium.

As you likely know, though, I'm not really a cartoon fan.  I watched it as a kid.  But, it didn't really resonate with me and most of my Joe inspiration was taken from the comic.  So, the homage aspect of this figure doesn't matter much to me.  The colors are interesting.  But, they also aren't great.  I love the deep green of Duke's pants and helmet.  It is a great color.  But, the yellow of his shirt just doesn't match anything.  I tried to pair him with a variety of figures.  But, couldn't get a look that I liked.  Duke just doesn't go with anything.  And, to me, that limits him.  I'd love a Duke that could be easily melded into photos.  But, this isn't that Duke.  And, while the paint masks are spectacular, the color palette just doesn't translate into a neat looking figure.  So, Duke is just a toy that I own.  He sits in his drawer and I have yet to have any real compunction to pull him out for photos other than those in this profile.  It's not a terrible fate as it's the same way I feel about many of the 2000's releases.  But, I was hoping for more from a premium priced toy.

One of the supposed perks of premium pricing is that we get a bunch of extra accessories with each figure 2 pack.  With Snake Eyes and Stormshadow, it was extra 1989 Snake Eyes gear that didn't really go with the released figure.  With the Cobra Trooper/Officer, there was a nice cadre of additional weapons.  Most of them were Joe weapons.  But, they also represented pretty much every weapon that was released with a Trooper or Officer all over the world.  For Duke and Cobra Commander, though, the ante was upped again.  The Commander included a nice batch of weapons, computer pads and even binoculars.  Duke, though, was the real plum.  Aside from his helmet and card art inspired XMLR, Duke also included binoculars, his backpack (which keeps the 1984 color and doesn't match with this figure at all!), a green M-32 like the original figure, a dark green bazooka (still missing the sight!), an American flag and pole, a figure stand based on the anniversary figure design, a bizarre shoulder harness and, the coup de gras, a silver JUMP backpack that's meant to be held by the harness.  It's a great complement of gear and seems like a deluxe figure.  I'm not sure it's worth the $21 for the figure.  But, it does help make this figure feel like less of a price gouge.  Personally, I'd love for every Joe to include a specifically colored JUMP.  It would be awesome.  But, I'll take it just with Duke for now.

The quality of this figure is pretty strong.  There is, though, quite a bit of consternation over the eye paint on the figure.  They eyes of most figures are not symmetrical.  In close up, macro photos, the eyes look terrible.  But, under normal vision, it's far less noticeable.  The head is goofy.  But, Duke has always been goofy.  The paint ops, though, are top notch.  They are a step up from the 2000's era.  The plastic quality is about the same as the 2000's, though.  So, you have softer overall plastic along with more pliable thumbs and crotches.  I do not, though, like painted hands as they are susceptible to wear.  But, few of these will be played with.  So, that's less of an issue.

This figure is an all new Duke mold.  So, while Duke was released in 1984, 1988 and then in a variety of times in the 2000's, those were all different molds from this figure.  Hasbro is just releasing its first repaint of the Pulse era when the Stinger Driver shows up in a few months.  I'd love for Hasbro to start repainting some of these new molds.  But, I'd prefer them to come in a cheaper option for packaging.  I don't really want a Tiger Force Duke or a 1984 colored Duke on a full cardback.  But, I'd love one of each in a baggie for a cheaper price.  It would be awesome to get a Night Force Duke.  Or, even a figure based on the European Force Mirage.  I do hope that we see some repaints in the line, just to get more than 8 or so figures in a year.  We'll see if that ever happens, though.

If you want Duke, buy him right now.  He and Cobra Commander are $42 plus shipping.  You can even buy up to 5 of them.  Honestly, if I could just buy a Duke with all the gear for $21, I'd probably get one or two more: just for the gear.  But, I'm hesitant as the price seems high with the Cobra Commander.  The long run value for these figures is unknown.  I'm sure the Cobra Commander will remain desirable as it's the first release of that mold since 1984.  Duke is less certain as this is a specific look for the character.  But, the figure is solid and the gear is amazing.  That's usually a recipe for prolonged interest from collectors. 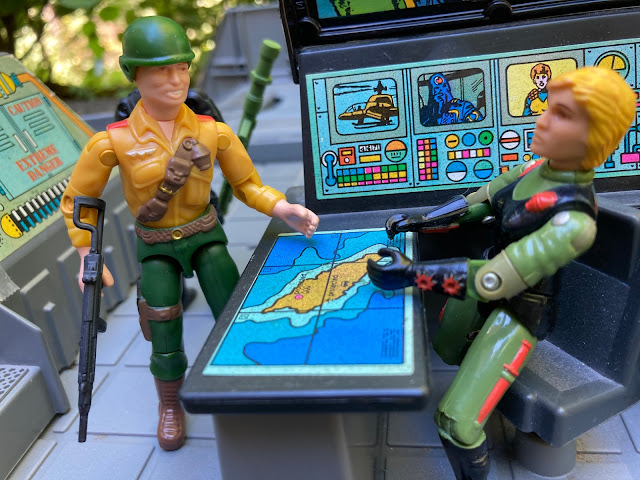 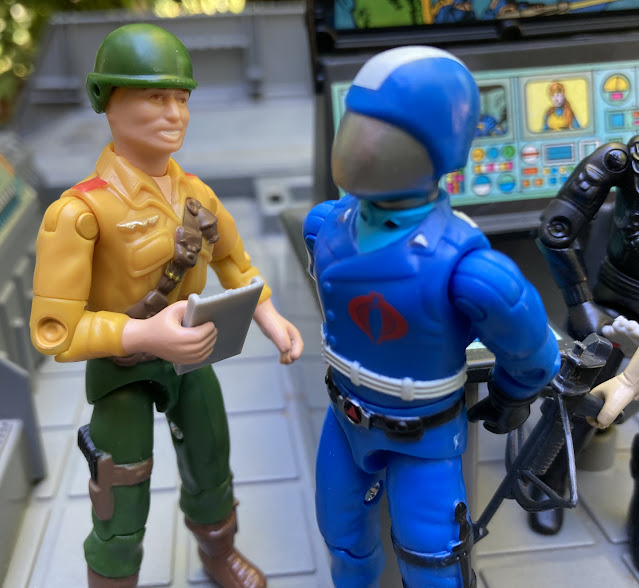 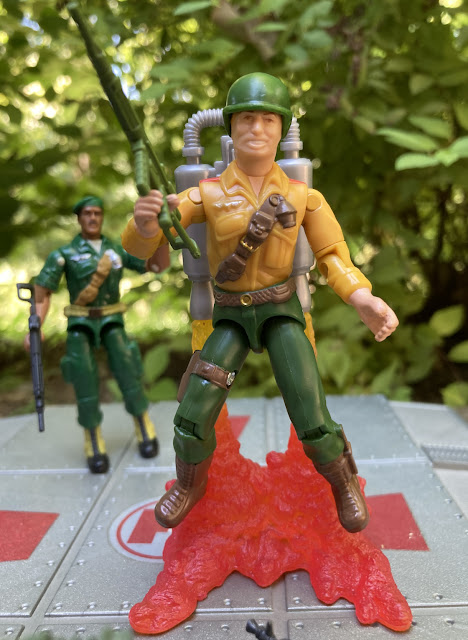 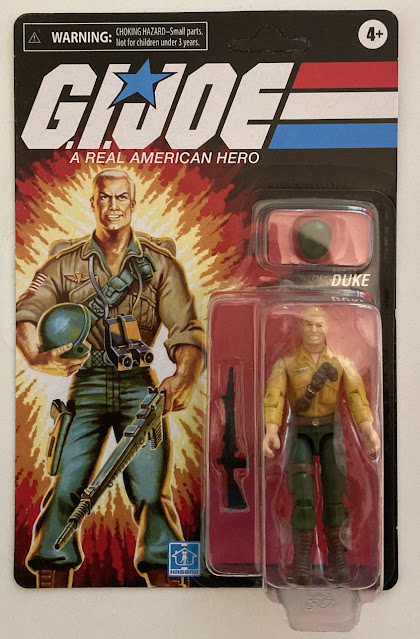 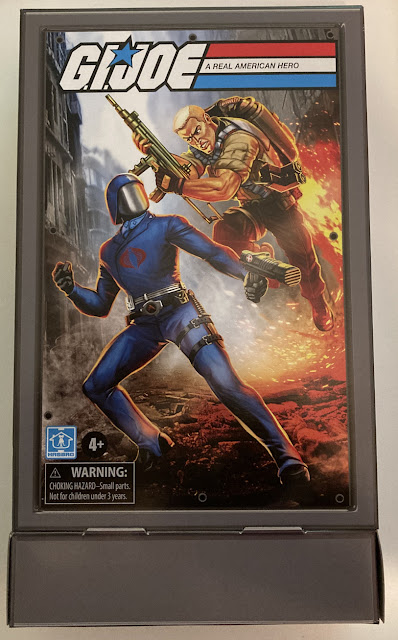 Posted by Robot_Sonic at 12:03 AM
Email ThisBlogThis!Share to TwitterShare to FacebookShare to Pinterest
Labels: 2022, Duke, Hasbro Pulse