The 1992 Joe line is incredibly strong.  It's full of new molds for classic characters as well as a nice variety of new introductions to the line.  The colors of the year blend well and create a cohesive visual display.  But, the standard carded line of figures only included a few figures.  The rest of the year's line was released in various subsets and smaller vehicles.  Yet, the quality of mold and color continued and the entire is one of the better looking entries of a displayed collection.  Among the releases was a new version of Spirit.

After being introduced in 1984, Spirit got his update.  It's easy to recognize the new look as Spirit.  He kept his long hair, but has it styled into a single pony tail instead of braids.  He retains his trademark headband.  But, once below his head, this Spirit is less an homage to Native American culture than a newly designed badass combat soldier.  He is burdened with an over-abundance of grenades.  (A common thread among Joe figures.)  But, they aren't too bulky and keep the overall appearance of this new Spirit relatively slim.  His chest is a bright green that visually pops.  It is set against black paint that highlight the mold's sculpted details.  The figure features blue pants that blend with many other 1992 releases.  And, his red gloves offer a both a splash of color as well as tying together the red pattern on the figure's headband.  To top off the details, Spirit has molded feathers on his right arm that offer a little reminder of the figure's roots.

On paper, this figure should be amazing.  But, the thing is, it really isn't.  While it's nice enough, the sculpt was improved upon in 1993 with the mail away color scheme.  The brown, gold and white combo on that figure is more unique and better fits the mold and character.  The head might be a little too large for the body.  And, Spirit can appear to be disproportional at times.  And, the red gloves are a bit off-putting.  They really interfere with the blue, black and green.  The red and white on the headband works.  But, the gloves really take you out of the overall design.  And, as the hands are a key part of any figure's look, a bad color can have an outsized affect on the appearance as a whole.

This 1992 Spirit was part of the Air Commandos subset.  While the figure was sold on a card, the cards were drastically oversized to show off the gliders that were the real selling point.  Hasbro's original gliders in 1983 were garbage.  These 1992 releases, though, promised they would fly 40 feet with the figure attached.  Hopefully, not too many people actually did that with the gliders.  But, Spirit's red, white and blue patriotic overkill special seems out of place with the character.  And, today, the Air Commandos are remembered for the high quality figures rather than the cheesy gliders.  Unfortunately, though, the gliders cost anywhere between $8 and $10 each.  And, when you consider that there were far better alternatives available at that cost, the high price point was rather prohibitive to the toys really selling on par with sets like the DEF and even the Eco Warriors.  Which is why, even today, all the Air Commandos figures appear with less frequency than most other carded 1992 figures.

Did you know that Spirit was never released without Mutt?  In every single instance where Spirit was released, Mutt was also available at the same time.  They both debuted in 1984.  Then, they both returned as Slaughter's Marauders in 1989.  At various times, they were both released in Brazil and Mexico in the same waves.  Then, exclusive repaints showed up in Europe in the early 1990's.  Both characters got new molds in 1992.  Then, Mutt was repainted as a carded figure in 1993 and Spirit was available as a mail away in the same year.  It was not until the post vintage era where the two were separated.  Both appeared together in the comic.  So, there was a deliberate pairing of the two.  But, all of their designs work pretty well together until the 1993 versions.

Spirit comes with a single accessory.  He has an oddball pistol.  My introduction to the mold was with the 1994 Viper.  And, I felt the sci-fi nature of the weapon worked well with that figure.  With Spirit, it seems out of place...especially if you know of the amazing accessories that were included with the character's debut figure.  The upside is that there are many, more common, accessories that work well with this mold.  But, the disappearance of Freedom and the lack of other gear that would have accentuated the character feels like a missed opportunity.

My introduction to this figure mold was with the 1993 mail away version.  And, that remains my default use of this mold today.  Back when I got a bagged 1992 figure from Canada, I was never compelled to open the figure.  The 1993 was enough for me.  And, when I got a loose 1992, that feeling continued.  Now, though, I do find this figure works well with other 1992 releases.  And, is a nice background filler in photos and dioramas.  As a main focus, I'm still going with the 1993.  And, my first choice for any use of Spirit is the original from 1984.

The 1992 Spirit mold got two uses.  The first was this Air Commando version.  Then, in 1993, the mold was repainted for the International Action Team.  This maroon and white version is probably better than the 1992 coloring.  But, both uses of the Spirit mold were relatively obscure releases.  Bagged overstock Spirits were offered as a Canadian mail away.  And, a great number of bagged Spirits came into the collecting community during the Hasbro Canada find in 1999.  Those figures, though, are bagged without guns.  So, if you see bagged figures sans weapons, you know they are from the Canadian overstock.  Sadly, Hasbro didn't use this mold in the 2000's.  It's a shame as it would have been great in a 1984 Spirit color scheme or a Euro Spirit color scheme.  But, it was not to be.

Dealers will sell loose Spirits for $30 and complete versions for $60.  That's a lot of money for a weapon that's not that small, isn't overly cool and doesn't really have any cachet.  On the open market, though, you can get Spirit figures for $13.  But, open market pricing on complete figures runs between $50 and $60...meaning the dealers are right at market on the complete figures.  That's very odd.  And, something that's likely to correct if the Joe market doesn't get back to normal soon.  The upside, though, is that a relatively hard to find, high quality update of a classic character is still affordable if you are willing to sacrifice his non-iconic weapon.  There's much worse outcomes in the Joe marketplace today. 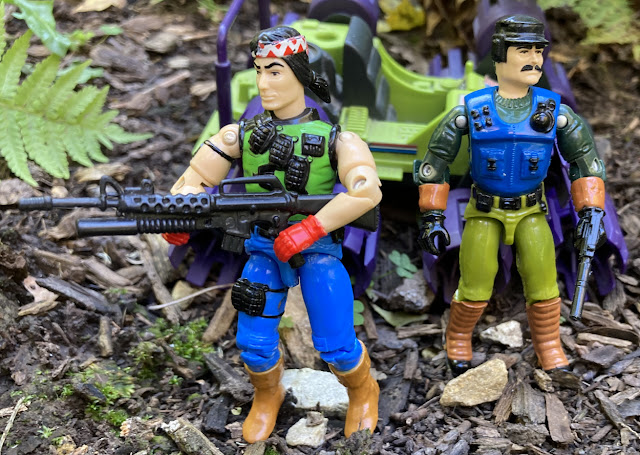 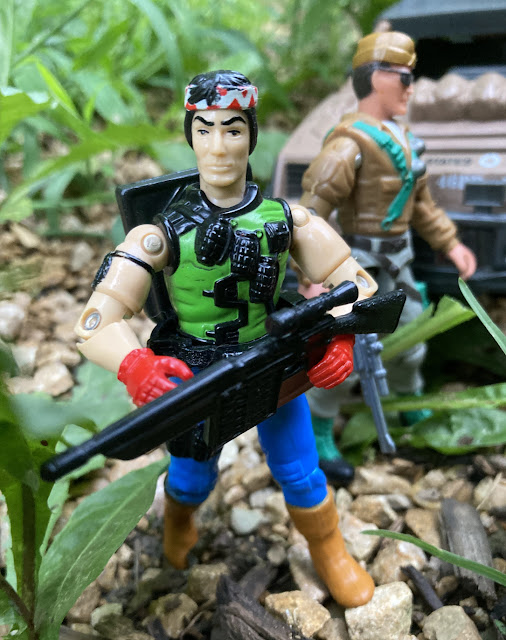 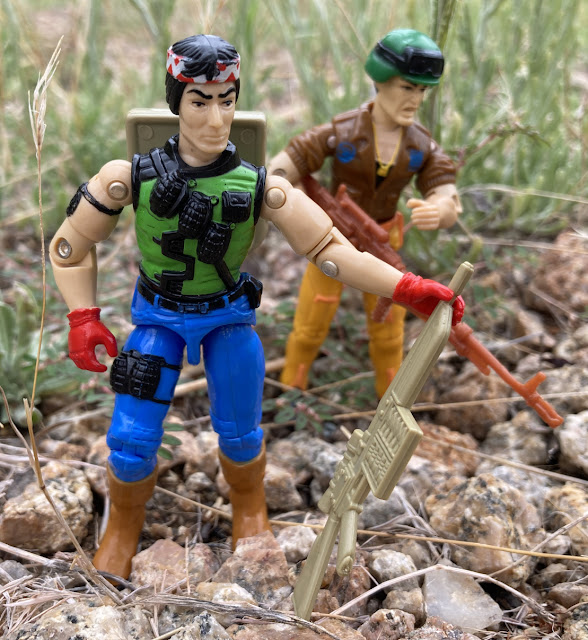 Posted by Robot_Sonic at 12:47 AM
Email ThisBlogThis!Share to TwitterShare to FacebookShare to Pinterest
Labels: 1992, Air Commandos, Spirit