In December of 1986, I had lucked out and found several brand new 1987 G.I. Joe releases at the local Toys R Us store.  As 1987 wound down, I was hopeful that the situation would repeat.  Sure enough, one December day, I found a few new figures on the pegs.  Labeled with the moniker of Battle Force 2000, the figures had a science fiction slant.  But, I was fine with this.  Really, the only issue with the figures was that when I turned them over, I didn't find the brand new 1988 releases for which I was hoping.  Instead, I found the same old 1986 and 1987 characters on the back with a new offset featuring the six new figures in the Battle Force 2000 series.  The store had all six.  My youngest brother got a Maverick.  My younger brother picked out Dodger.  And, I bought Blaster and Knockdown.

By 1987, my Joe world was pretty much my own concoction.  It wasn't based on the comic or cartoon, though it did have some elements from each.  In the early part of 1987, my Joe toys were in the basement.  Over the years, the toys migrated between my room, the toy room and the basement depending upon a variety of factors.  But, as it was just after Christmas, we were playing in the basement as there was space and we could leave our toys out each night to pick up the battle again the following morning.

There were two key points of the basement that worked together to make Knockdown a key figure in my collection for a short time.  First, we had one of those old, oval rugs that was spun in multi-colored rings around a white center.  For us, the rug could be seen as a island with a lake in the middle, just a lake, various circular roads or rivers.  In this case, I was using the center of the rug as a poisonous lake of either lava or mud.  The second piece of kismet was than many of our now outgrown toys were stored in a storage room off the playroom.  This room had been the home of the coal furnace from the 1940's when the home was built.  That was long gone, though the walls were still stained black from the coal.  On a shelf in this room was my old Slave I.  For some reason, I dug this out.  At the time, I didn't have many aircraft for my Joes.  So, the spaceship was attractive as an option for flying forces.

All of this lead to my pulling out the Slave I, finding most of the pieces and now having a new weapon to be used in my adventures.  As Knockdown was the most sci-fi of all my figures, he quickly found himself in the cockpit of the iconic ship.  I couldn't call him Boba Fett as he looked nothing like Boba Fett.  So, instead, he was just named Fett.  (Yes, super, duper original.)  Of course, he was not affiliated with Joe or Cobra.  And, instead, would play both sides much like Kwinn.  Slave I was a devastating weapon since it was heavily armored and had two massive cannons.  And, once outside of his ship, "Fett" had an insanely powerful handgun (Knockdown's stupidly oversized pistol.)  that was capable of blowing up a Mauler or Hiss Tank.

For several weeks, I had great adventures with Knockdown and his Slave I ship.  He would blow vehicles into the mud/lava lake.  Or, he'd shoot in front of ground troops and leave them the choice of dying in a hail of massive bullets or being incinerated in the lake.  Eventually, I had hand held artillery weapons damage Slave I.  Fett was defeated and I lost interest in the entire concept.  Before too long, my figures migrated back up to my room.  When they did, Slave I stayed behind in the basement.  And, it would not come off the shelf in that basement storage room until 1997 when I dug out all my vintage Star Wars toys that were left from my childhood.

After that Knockdown was an afterthought at best.  When Cobra would attack the Joe base that was in my room, Knockdown might be involved.  His hand held weapon was still seen as overly powerful.  So, he was handy to have around on occasion.  But, I never really developed a character for him outside of "Fett".  Blaster did have some characterization.  So, it wasn't just Knockdown's late appearance in my collection.  He had a purpose, but not much more than that.  As 1988 progressed, Joe fell out of my daily routine.  I had aged out.  And, once I get a Nintendo in June of that year, the era of toys in my childhood was over.

Knockdown features a lot of differences.  But, none of them really add up to anything all that interesting.  From a carded figure perspective, there are two separate releases of Battle Force 2000.  The early figures released in late 1987 were on single cards.  For 1988, Hasbro packaged the figures in two packs.  The figures are not different.  But, the single cards didn't see a long release window as they appeared very late in 1987 and featured 1987 cardbacks.  There are two different filecards.  The single pack version is different than the two pack version as it has more detail on Knockdown's specialty.  There is also a variant on Knockdown's gun.  It can have a thick handle or thin handle.  When you see all the Knockdowns out there with broken thumbs, though, you realize that either version can be tough on the figure's hands.

From a mold perspective, Knockdown didn't get a lot of use from Hasbro.  There was just the one Knockdown figure released in 1987 and 1988.  The figure was released on a single card in various European countries.  Knockdown's head appeared on the Super Trooper and his repaint, Rapid Fire.  Knockdown then went to Brazil.  There, though, Estrela got some mileage out of the mold.  First, the full Knockdown figure was released on a single card.  Named Detektor, this figure is based on the Hasbro color scheme.  It features a darker green helmet, darker blue body and slight shading differences.  Then, Estrela used Knockdown's waist and legs to make Albatroz for the Patrulha do Ar subset.  If that weren't enough, Knockdown's entire body was painted neon and paired with a 1986 Sci Fi head and released in Forca Eco (Eco Warriors) set as Biologico.  This is a neat figure that was once common but has now gotten expensive.  The mold never appeared again.  With not much demand for the character, that's unsurprising.  But, if you like Knockdown, there's at least hard to find figures from Brazil to track down.

Dealers will sell mint and complete with filecard Knockdowns in the $20-$25 range.  Be sure to check these carefully, though, as Knockdown is very susceptible to paint wear on his eyebrows, hair, chest and thumbs.  Some dealers will keep the helmet on to hide the wear on the figure's head.  Left to the market, though, the same Knockdowns are about $10-$15 figures.  If you are OK without a filecard or a bit of paint wear, you can drop them below $10 without too much issue.  Personally, this seems like a lot for a figure that isn't all that interesting, has ill fitting gear and offbeat colors.  But, it's also in line with the current market where there are almost no mint and complete figures that routinely sell below that $10 line.  If I didn't have the childhood connection, I wouldn't own a Knockdown.  He doesn't carry enough panache to justify existing in my collection.  But, due to his short, but memorable, tenure in my childhood play, he's kept around.  He's never been the subject of many photos.  And, I don't really see that changing as we go forward. 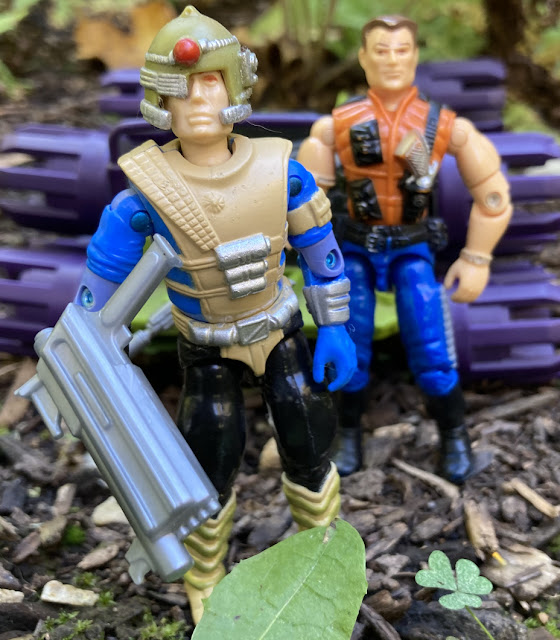 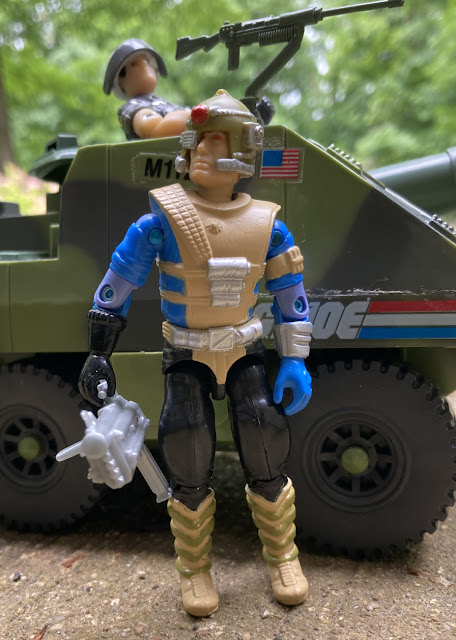 Posted by Robot_Sonic at 12:03 AM
Email ThisBlogThis!Share to TwitterShare to FacebookShare to Pinterest
Labels: 1987, Battle Force 2000, Battleforce 2000, Knockdown