Maybe it's the fact that I've recently moved all my Joes to a room with white carpet. Maybe it's my recent acquisition of 22 1993 Snow Serpents. Maybe it's the fact that there has only been one month out of the past 18 that has not had a day with a 90 degree temperature! Whatever the reason, I'm currently on an artic kick. The last time I was on one was probably back in 1996. Since then, I've acquired new artic troops and vehicles, but haven't really used them. The other day, I broke out one of my Wolfs. I dug out some Snow Serpents and started having fun. I then realized that I had another Ice Viper to add to the back of the Wolf. As soon as I got him out of the drawer, I knew my next figure to profile.

The Ice Viper is really a nice figure. He doesn't have all the trappings of the original Snow Serpent, but works very well for his specialty. He is a great vehicle driver who looks fabulous in his vehicle. He works both with and without his helmet. He has the always popular red face mask that blends very nicely with the white uniform and brown pouches. The Wolf is, in my opinion, the best artic vehicle Hasbro ever produced for the line. The Snow Cat was nice, but the Wolf's turret gun, ski torpedos, and hidden missle launcher are just too much for any other vehicle to compete with. It is the perfect artic assault vehicle and the Ice Viper is the perfect driver for it. I've recently returned to artic adventures. I'm planning a trip back to my parents' house in the next couple of months. When I go, I'll be able to bring back another Snow Cat, my Blockbuster tank, and another Wolf. At that point, I'll have quite an array of artic war machines. Needless to say, it will be fun.

The one peculiarity about the Ice Viper, though, is his weapons. Sais? Sure, they are pretty cool and the leg holsters are a very unique idea. I'm surprised the Ice Viper's leg molds never appeared on any of the Ninja force figures from the nineties. However, why would an artic vehicle driver use hand to hand combat weapons? It doesn't make much sense to me. Plus, it was easy for the sais to fall out of the leg holsters when the figure is seated in the Wolf. Some sort of gun would have been much more practical. However, the sais give the figure a mystique. They hint at something in his background. I think much of my interest in the Ice Viper stems from his filecard. It really painted an interesting portrait of the character. For that reason, I used the Ice Viper for quite some time when I was younger. Now that I've rediscovered him, I think he'll get quite a bit more use. He complements a platoon of Snow Serpents very nicely. As I've also managed to pick up about 6 Blizzards and 4 Snow Job figures, those Snow Serpents and Ice Vipers will have a large contigent of Joe forces to contend with.

The Ice Viper mold was only released at retail with the Wolf. He was, though, available as a mail away for several years. The figure did not appear any where else in the world. For whatever reason, Hasbro chose to ignore the mold throughout the repaint era and never revisited it. In 2007, Master Collector found the mold, including the helmet and sais, and released it in an over-priced exclusive set. Even with that release, I would still welcome another retail version of this figure. The mold is strong and there are several different color nuances that could be used to make interesting, updated Ice Viper figures.

Ice Vipers aren't too tough to find, unless you are a stickler about completeness. The sais and his helmet are usually missing from the specimens you most often see on the second hand market. The nice thing, though, is that artic figures don't tend to command a premium. (Just look at the price differential between an original Snow Serpent and a Crimson Guard or an Eel.) Ice Vipers came with the hugely popular Wolf, but were also available for many years as a mail in figure. You can still find many, many bagged specimens of the figure that won't kill your budget. As the Wolf, though, is a two seater, many collectors do like to have a pair of Ice Vipers manning it. They still aren't too hard to find and make an excellent addition to any collection. I live in a place as far away from snow and ice as can be, and I still consider this guy an integral part of my collection. I think you will as well.

I need a couple of Ice Viper helmets. If you can help me out, drop me a line. 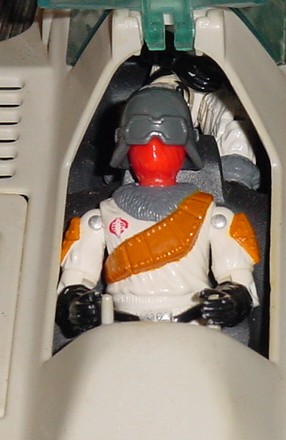 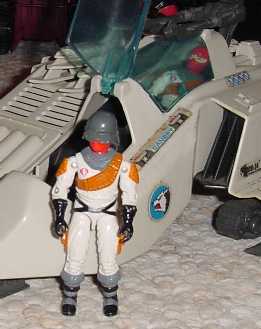 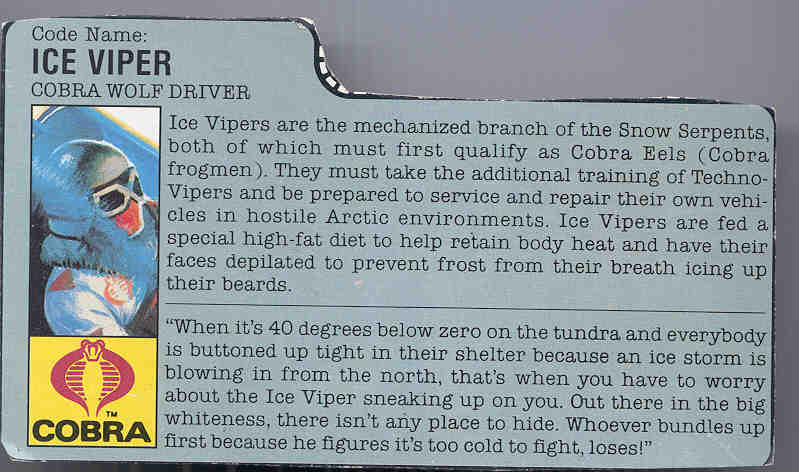