The Laser Viper is another of the very seldom seen, but very cool 1990 Cobras. He eluded me for nearly a year before I managed to track down a complete specimen. Like most of the 1990 figures, he takes some patience to find. Once you have him, though, this is another unsung Cobra figure that is a very nice addition to your armies.

This guy is cast in a very nice, subtle grey with dark blue highlights. He is in a color scheme that actually lends itself to combat. (Unlike the 1988 Toxo Viper or 1988 Astro Viper, the two figures to which this guy is most similar in mold.) The problem is that his accessories limit him. While he has a nice mold, an awesome removeable helmet, and a good color scheme, this guy's accessories suck. The huge pack, with the lasers built into it, really limits the amount of use this guy gets in my collection. They very easily could have created accessories that were similar to the 1986 Sci Fi's, or even the aforementioned Toxo Viper's. Had this guy included a hand held gun that attached to a smaller pack, I think he would enjoy a little more popularity in the modern collecting world. I know that my interest in acquiring multiples of him is limited due to lack of cool accessories.

Due to the Laser Viper's lack of decent accessories, and his relative scarcity, my Laser Viper has found himself in new roles. I use him, sans helmet, as a commander of a Hiss Tank battalion. I've also used him as a support Viper who works along side the Techno and Tele Vipers in support of Cobra's heavy artillery. With his helmet, I've used him, sparingly, as a pilot and as the leader of my Astro Viper brigades. In those settings, I've found a bit more use for this figure. I think they wanted to put out a foil to the Joe laser troopers. Rather than give us a named Cobra higher up, (Instead they squandered their crop for 1990. It's really amazing how they pumped out the army builders in 1989 and 1990, but really forgot the Cobra hierarchy until '91 and '92.), Hasbro graced us with this figure. His mold offered so much, but delivered so little. I think part of the reason why 1990's are so seldom talked about is because the figures are nice, but could have been so much more. I just don't have much use for a Laser Trooper. You can use him as a welder, but I never went for the guys with laser rifles. I used lasers as tools, not weapons. Give this guy a good looking assault rifle, tough, and I think that his usage would increase greatly.

In 2001, Hasbro gave us a reinvention of the Laser Viper. He was better equiped to serve in the infantry and actually addresses many of the issues I had with the original mold. But, that new Laser Viper is still better suited to other roles than a laser trooper. In 2003, Hasbro dusted off this original mold and included it (with all the original accessories) in the Python Patrol set. This figure brought the mold back into the collector vision, but still showcased many of the limitations which are discussed above. It is likely that Hasbro still has the Laser Viper mold available for use. However, I'd rather the character not make another return appearance and, instead, like to see the mold used in various amalgamations for new characters. There are many parts of the mold that have potential, so seeing this figure as a base for others is probably his best use going forward.

I've already said that Laser Vipers are tough to find. However, they are not that popular among collectors. They really don't lend themselves to army building, but do provide nice custom parts. Since the 1989 and 1991 Cobras steal most of the thunder from the 1990 releases, Laser Vipers can be had for a relatively small price. The problem is finding them. Usually, they turn up in lots, but they are missing accessories. While Range Vipers are semi-tough to find, these guys take the obscure Cobra moniker to a new level. You can find them offered by themselves from time to time. When this occurs, though, the interest is minimal and you can often get the figure for under $5.00 for a mint, complete specimen. I've found that one Laser Viper, though, is enough. Unlike most Cobra army builders, I have yet to want a second to complement my original. While this guy is a very nice figure, I think he will always remain one of Cobras most unknown minions.

The Laser Viper is a cool figure, but not one of whom I want to build armies. What is his function in your collection? Email me. 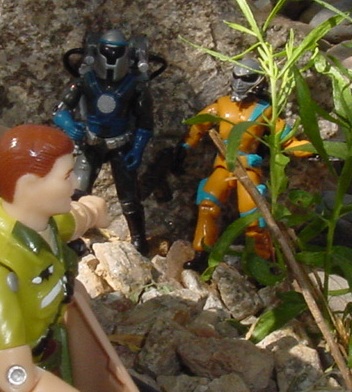 Posted by Robot_Sonic at 1:30 AM
Email ThisBlogThis!Share to TwitterShare to FacebookShare to Pinterest
Labels: 1990, Laser Viper