Normally, I don't go for foreign figures. The few differences there are between their American counterparts usually aren't enough to warrant the high price tag foreign releases tend to have. Lately, though, I haven't found American figures to be all that exciting. There are, roughly, 550 different figures that were released in the U.S. Of these, I have 413. The remaining figures, though, really don't grab my attention. I'm mostly missing figures like the Shadow Ninjas, the armor tech Star Brigade figures, and other lame subsets from the final years of the line. My collecting dollar is stretched pretty thin right now, and I really don't want to blow what little I have on figures I really don't want. The nice thing about this, though, is that my horizons are broadened. A year ago, I wouldn't have even considered foreign release Joes as a viable avenue. Now, I've found a couple of foreign figures that are very cool and have earned a nice spot in my collection. The first of these is the European Tiger Force Outback.

I don't know what it is about this figure. It might be the white hair or the cool looking tiger face painted on his shirt. Whatever it is, this guy is just plain awesome. I've always liked the original Outback, and have been half heartedly looking for a Night Force Outback for about a year. This figure, though, seems to combine the best of both. He has the basic cammo pattern of the first, but adds the depth of color like the second. Some people may not go for the orange, but I have always liked that color (See the Nitro Viper or the1994 Star Brigade Roadblock.) and think that its use here is highly justified. I think this figure is so appealing because it is so unusual. The only figure that comes close to the white hair is Hot Seat. On that figure, it doesn't work so well. On this guy, though, it is perfect.

There were 6 European exclusive Tiger Force figures: Outback, Psyche Out, Hit and Run, Tunnel Rat, Sneek Peek, and Blizzard. They are all extremely unique figures, visually, and are quite different from any American versions offered. All of them utilize different colors that work very well together. Of all these figures, I think that Outback works the best. (A case could be made for Blizzard. His color scheme is very cool, until you remember that he is an arctic trooper. On that level, the figure fails.) Outback's specialty allows him some leeway in dress. While the orange would stick out in the wilderness, it would also provide a good reference point if he is waiting for extraction or rescue. The huge tiger on his chest, while a bit of overkill, is a nice tough that you won't find on any American release figure. I think that is the single reason why I am so enthralled with this figure. He is drastically different from anything released here. If I did not know anything about foreign released Joes, I would have originally thought this figure a well done custom. It showcases originality that was simply not seen in the American line much past 1987.

The Outback mold has had an interesting life. After it was used twice in the US, the mold was then used for this figure. After that, it was sent to Brazil. There, the mold was released as Forestiero. He is very similar to the Tiger Force Outback in appearance, but has some slight differences. After that, it seems that Hasbro got the mold back. Outback was slated to be a member of the 1998 Desert HQ set. A few of those figures exist and they are among the rarest Joes in the whole world. In 2001, Hasbro put out the entire mold but with a new head as Big Brawler. Fans cried foul over Outback not being released, but Hasbro balked at releasing the character for whatever reason. Around 2003, the mold was sent to India where it was used on the Funskool Big Brawler. But, once again, Outback's head was missing. Now, the mold's whereabouts are unknown. It is likely that Hasbro has access to it and could easily reissue a classic Outback in a new paint scheme. However, this hasn't happened and ARAH style Joe fans are left only with the dim hope that the original Outback mold might appear in a future convention set. If that happens, though, I think it would end up being one of the more popular convention figures in recent memory.

The European Tiger Force figures vary in degrees of difficulty when you are trying to acquire them. The Psyche Out is everwhere and can be had for nothing. This guy and Blizzard are next in line. After that, I think I've only seen three or four Hit and Runs and don't think I've seen the other two offered for sale. As such, some people think all the European figures are hard to get. While this guy isn't cheap, he is available. You usually see half a dozen or so hit Ebay over the course of a year. While they are a bit pricey, this guy isn't nearly as expensive as you might think. He is, though, a great figure. I still don't know how I'm going to use him, but the figure is sitting out in a place of prominence. The figure is just so aesthetically striking that I can't put him away. If you have the opportunity to add this guy to your collection, I wouldn't pass it up. This guy is the first figure I've acquired since the Headhunter that has grabbed my attention so profoundly. I think he could also have that affect on you.

All of the European Tiger Force figures are pretty cool. I would really like a Hit and Run. If you can help, let me know. 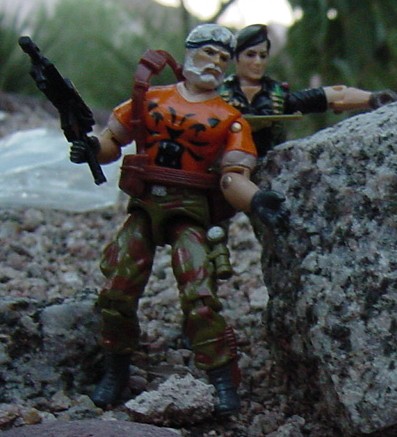 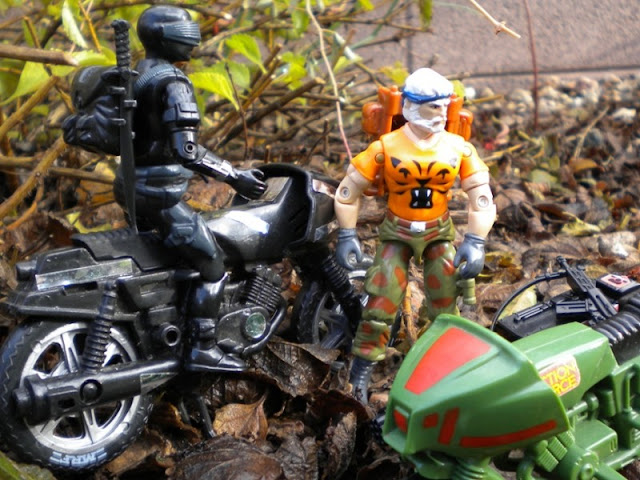