I promised I would lay off the astronauts for awhile, and I have done so. However, the time has come for me to profile yet another of 1993's overlooked figures: the Astro Viper. Of course, this figure had its original version released in 1988. While that figure came with superior accessories, the colors were not as eye catching as this version's.

I originally had the 1988 Astro Viper. When I first encountered the 1993 Star Brigade figures, though, the new version, as well as the new TARGAT, were gone. I searched for this guy for about a year, but, by that time, Cobras, regardless of who they were, were pretty scarce to come across on the retail shelves. I managed to find only three Cobra army builders at retail in '95 and '96. (Two Crimson Guard Commanders and the 1994 Viper.) About this time, I rediscovered my AGP pod. While the Nullifier was a good figure, I had other uses for him. I needed a new pilot. Naturally, the original Astro Viper filled the role. His color scheme fit in well with the AGP and I was very content. When I got 2 Firebats from Hasbro Canada, though, I wanted a new pilot to be at the helm. I experimented with a number of different figures, but finally decided to open up one of the many carded '93 Astro Vipers I had amassed in my Star Brigade buying sprees.

As soon as I opened this guy, I was enamored with him. He is a perfect Cobra pilot. His color scheme is far superior to the original Astro Viper, and it works well as a flight suit. The black helmet with the neon green faceshield is just fantastic. It looks very menacing and is a perfect fit in an open canopied aircraft like the firebat. I immediately opened another of my carded figures and then managed to acquire two loose specimens. Coupled with my half dozen or so original Astro Vipers, I now have a mighty army of Cobra pilots. I use the originals as the more experienced pilots who fly the AGP's, Rattlers, Night Ravens, and (I believe) Hurricane jets. This figure amost exclusively flies the Firebats, though they can sometimes be found in the drones from the Mamba. As I said in my profile on the Motor Viper, I like uniformity in my Cobra ranks. I like to have like troops driving all my vehicles and I enjoy having like troops flying all my planes. The Astro Viper fits that role. The two distinct versions help create a disparity in rank and explain why some are in lame aircraft and others are in the best.

This figure's lone drawback is his lack of weapons. While he came with an awesome helmet, he also came with orange guns. Needless to say, they are downright awful. As I use this guy more as a pilot than a space trooper, guns haven't really been an issue. I have given them small pistols and such, for use when the land their aircraft, but don't consider a weaponless Astro Viper useless. Many people are turned off by the 1993 figures since their weapons are so lame. Figures like the Astro Viper, though, work well despite this shortcoming. This guy has still found himself in my heavy use box even though he doesn't have a standard side arm.

The Astro Viper mold was first used in the US in 1988. From there, it went on to Brazil where it saw a short release as a member of the Iron Grenadiers subset. The mold was then returned to Hasbro for use in 1993. Hasbro still had the mold as late as 2001 when they used it for the Shadow Viper. After those releases, though, there really isn't much more that can be done with the mold. All the American releases of this mold are easy to find and cheap to acquire. As such, there really isn't enough demand to justify Hasbro using this mold again at any point in the near future.

Like all the 1993 Star Brigade figures, this guy is cheap and easy. Carded versions run about $3-$5. I've only come across a couple of loose samples, but those usually sell in the same price range. You pretty much have to buy carded versions in order to get this figure. Not many people opened up the 1993 Star Brigade figures. Those who did, though, often lost their helmets. Sans that, this figure is just custom fodder. I've found many uses for this figure, though, and think that he is still a cheap way to build up your Cobra pilot or ground support corps.

These guys are nice, but I've got enough. If you do have a loose 1994 Predacon or Lobotomaxx, though, email me. 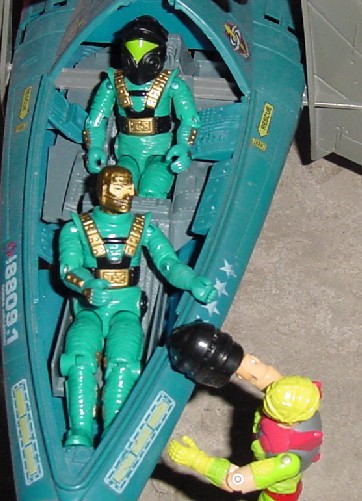