When I first returned to Joe collecting in the mid '90's, one of the requisites for my purchasing a figure was if he came with black weapons. If I found a figure with black weapons, I purchased him. End of story. This approach netted me a few, shall we say, "interesting" figures, but also gave me the chance to really enjoy a couple of the late Joe figures that were released. The vast majority of my profiles that feature '93 or '94 figures are about either astronauts or Cobras. While I've done a few Joes, I think that there are many more that were released in these final years that really deserve more collector attention. Among these guys is the 1993 Duke.

I've never been a Duke fan. I didn't like the original figure and I've never liked the character. However, Duke had a couple of excellent molds made up for him in 1992 (which will be returning with the newly announced version of Duke we should see either late this year or early next) and 1993. It is the 1993 mold, though, that was one of the few figures I had available to me back when I first returned to toy collecting. For that reason, this figure held an important role in my collection. Of course, I didn't use this guy as Duke. He was a new, younger soldier who was just learning the ropes. I had him be the new leader of the few new Joes I had. The problem, though, was that his new character turned sour. Originally, I had made him to be a highly trained, excellent soldier. This role grew tiresome, though, as I acquired many more new figures who were much cooler than this guy. As such, this figure fell from grace. He became a a martyr who was sacrificed to bring the Joe team back together. I found that as a martyred hero, this character worked much better.

With the fall of the character made for this figure came the fall of the figure as well. He just couldn't compete with all the new figures I began to add to my collection in the late '90's. He disappeared into one of my 2 drawers of 1993 figures (I have well over 125 1993 figures. I don't know why that year is so high, but I've got more '93's than any other year.) and has yet to emerge. I just don't have that much use for the figure any more. As I've stated in other profiles like the Desert Scorpion, I'm not too keen on desert figures. When this guy was one of about 5 figures available to me, I made due. Now that I've got dozens of properly designed figures who work in all environments, I use them rather than stretch a figure like this. Still, though, this figure is very nice. The mold is excellently detailed. Some people don't like the molded helmet, but I think it works very well. Were desert scenes a more popular arena in which to use Joes, I think this guy would be more popular. Hasbro really tried to cash in on the Gulf War and the desert gear that was ubiquitous in all media in the years following. Many of the figures and toys they created, though, are nicely done. This Duke is no exception.

This mold may also have been an interesting footnote in G.I. Joe history. In 1995, the Battle Rangers were going to be released. While I've already profiled Flint, there was also to be a Footloose and Duke figures who were to be part of this line. While Flint made it all the way to the final prototype stage, and Footloose at least had his original parts molded, I have never seen anything that points to a mold for the 1995 Duke. However, that version of Duke did appear on many different G.I. Joe promotional items that appeared in the mid '90's. From these pictures, it is easy to see that the planned Battle Rangers Duke would have been a figure with a mold very similar to this one. He would have been done in a green cammo pattern that would have looked much like the 1987 Falcon's. As prototypes for other Battle Rangers have been found, it could be that the Battle Rangers Duke was simply going to be a repaint of the 1993 mold. Had that been done and the figure reached production level, I think this 1993 version would be more appreciated. It is a good mold. The desert paint can be limiting, but the figure is very solid.

1993 Dukes are insanely easy to find both carded and loose. They appear in all sorts of lots, as well as by himself. You can usually get them for under $5 or $6. As he was a very popular character, I think Duke was shipped in greater amounts than other figures of his year. I know I found him on retail shelves until 1996. I don't think this figure will ever be appreciated. Collectors have a really love-hate relationship with the Duke character. Many really like him, many really hate him. As such, there are a lot of people out there that have little use for this figure and aren't interested in him. Personally, I've found that he makes great custom fodder. Of course, the figure as it is is also very fun to use. This is not Duke's most obscure version (that would go to either the '94 or '97 version) but it is a figure that is often seen but rarely has attention paid to it. Hopefully, that will now change a bit.

I like this guy, but have way too many of him. There are a few other '93 figures I am after, but I would really like a '94 Star Brigade Predacon or Lobotomaxx. If you can help, email me. 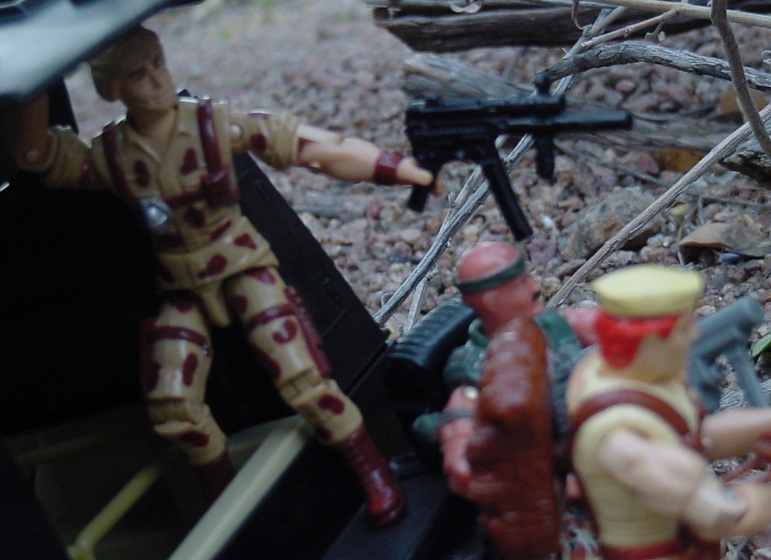