1985 gave the Joe collecting community the class of Cobras that it holds as the best group ever offered. While there is incredible nostalgia for this group, most of it centers around the Crimson Guard or the Eel. You even get a few people who are really ga-ga over the '85 version of the Snow Serpent. What you never see, though, is any great sentiment for '85's lost Cobra: the Tele Viper.

As figures go, the Tele Viper is as basic as you can get. Frankly, he is only a glorified Cobra trooper who wears just as plain a uniform, but carries some flashier accessories. It is easy to see why the Tele Viper would be overshadowed by his more famous classmates. It is upon deeper inspection, though, that the true value of this figure appears. The Tele Viper is spectacular in his simplicity. He is basic Cobra Blue and has a mold, that while lacking in some respects, is very simple and realistic. He has all the trappings of a communications trooper. I think that is why the figure works so well. While he isn't drop dead awesome cool, he is a figure that fits his specialty and provides the backup to make the other figures seem that much better.

I think of the Tele Vipers as the ultimate in how avant garde Joe really was. These guys were used to absolute perfection throughout the comic series. The modern military's reliance on high tech communications and computers required an organization like Cobra to have a branch of specialists like the Tele Vipers. Unlike many other genres, though, where "techie" characters are relegated to supporting roles, Cobra used the Tele Vipers as its front line in the assault on the American family. They were the ones sneaking into sewers to tap phone lines. It was also the Tele Vipers who were right next to the Commander during any battle so he could remain constantly updated on the situations that arose. I've always kind of forgotten about the Tele Viper. I didn't like his lack of battlefield flash. Now, though, I consider Tele Vipers, or his counterpart, the Python Tele Viper, to be essential to any Cobra offensive. I use them on my Detonator, or other large Cobra vehicles. They look very nice in this capacity. At some point, I would like to have a Terrordrome. If this day should come, I see it manned with original blue Cobra troops with the Tele Vipers manning all the computer stations. I think the look would be great.

Tele Vipers are an interesting figure. There are many aspects of him that make me think he was originally slated for a 1986 release rather than '85. First off, he is a Viper. The basic Viper, and variations upon him, did not appear until 1986. It makes more sense that this guy would, originally, have been part of that class. His mold also suggests a hurry up job. His head could have been much better. This looks like it was an earlier design that hadn't had time to be fine tuned. Also, his color scheme. Hasbro was moving away from the basic Cobra Blue. To put this guy in it was a throwback in an era before collector nostalgia. It is also a very simple, easy, and basic color scheme that the designers knew worked. All of these things point to a figure that was rushed, rather than allowed the proper time to mature. Rather than take the time to hand paint up a bunch of mock ups, they took the easy road out with the color scheme. Of course, I have no hard evidence to back this theory up, but I am throwing it out there since this figures seems so out of place among other '85's, '86's or even '87's.

The Tele Viper was released in the US in 1985 and again in 1989. Parts of him were used in 1986 on the Claymore figure. In the early 90's, the Tele Viper mold was then used in Brazil where it was released in colors nearly identical to the American version. That was the last time it was seen, though, as the mold has never appeared again. Many of the Brazilian Tele Viper's contemporaries eventually made their way to India where they were released by Funskool. But, the Tele Viper never saw such treatment. The mold may simply have died in Brazil or may have been left to rot in India for whatever reasons. Personally, I think the mold is nice, but not one that is a necessary repaint. The original Tele Viper is in strong enough colors and is easy enough to find that there really is no need for the mold to return. Instead, I'd prefer to see the Tele Viper character amalgamated out of several existing, '90's ARAH Joe molds. I think it would a great update to this mold and make a nice, more modern companion piece.

Of all the '85 Cobras, Tele Vipers are far and away the easiest to find and cheapest to buy. In fact, as Cobras from any year go, the Tele Viper is substantially cheaper than many of the later army builders. His lack of combat accessories seem to doom him to common bins and bargain prices. Of course, this means he is one of the last cheap army builders. Unfortunately, I don't see him staying this way for much longer. The Techno Viper, a similar specialty figure who isn't as cool as this guy, is already starting to become rather expensive. I see the Tele Viper following suit over the next year. As people move away from play and more into display and diorama building, figures like the Tele Viper who look good manning the support, gun, and maintenance stations will start to disappear. Lately, there have been a rash of Tele Vipers offered for sale. While I have yet to really take advantage of this surplus, I don't think the Tele Viper is a figure of whom you can ever have enough. As other collectors are starting to see this as well, I think the days of the cheap Tele Viper are nearing an end.

I have several Tele Vipers, but can always use more. If you have any you would like to trade, email me. 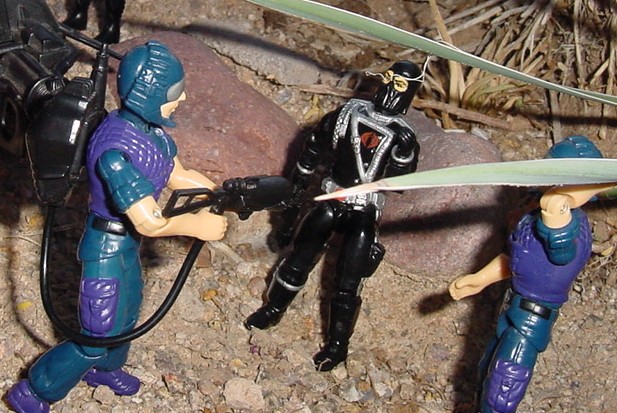 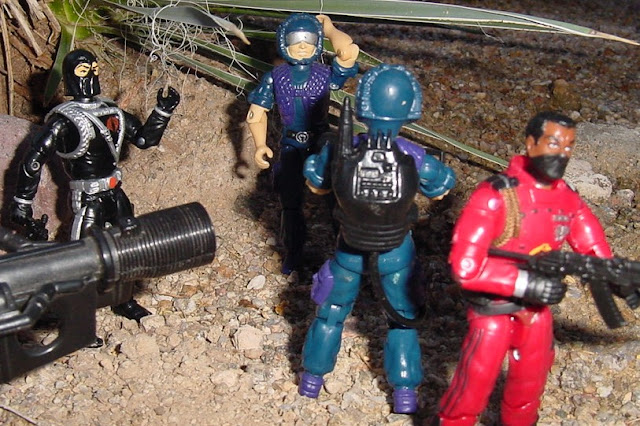 Posted by Robot_Sonic at 1:29 PM
Email ThisBlogThis!Share to TwitterShare to FacebookShare to Pinterest
Labels: 1985, Tele Viper