One of the areas of Joe collecting that I have tended to really focus upon has been the end of the original run of Joe figures. The primary reason for this is that I had just come back to Joe collecting as the line was winding down. I have profiled many of the 1993 and 1994 figures here simply because I have found them to be relatively unheralded in most realms of Joedom and I feel they are worthy of increased collector attention. While much of the feedback I get for this site seems to disagree about the quality of the later Joes, I still stand by my guns and insist that many of these late figures are worthy of standing equal to, if not above, most earlier figures. Of course, I do not place the 1994 Snow Storm into that category.

Snowstorm has so many strikes against him that there is no way he could ever be taken seriously in the Joe collecting world. He was originally intended to be part of the Eco-Warriors subset. When that idea was scrapped, his mold was still used, in Eco-Warriors colors, on a Battle Corps card in 1993. That version, though, was quickly pulled and replaced with a more subdued orange and blue version. This color scheme was then replaced in 1994 by the white, grey, and black version you see here below. The mold is lackluster, at best. The figure's head is minimally detailed and lacks any real, defining characteristics. While he is sold as an Arctic trooper, the mold looks like a futuristic space man. There is just nothing about this figure that really works. Unless, you find him a niche specialty.

This is what I did. I'm sure you all remember my mentioning of a certain Blockbuster Arctic Tank when I profiled a figure named Windchill. Well, Windchill was never destined to drive this Arctic tank with which he came. He was perched in the gunner's seat. I then needed a futuristic looking Arctic trooper whose uniform looked like he could be an armor operator. Enter Snowstorm.

Originally, I had the blue and orange version of this figure. When I got the Blockbuster, I decided that I needed a second Snowstorm to man the second seat in the cockpit. I went to a local Meijer's store where I had seen a Snowstorm when I bought the Blockbuster. As luck would have it, he was still there. I bought and took him home. Imagine my surprise when I discovered that I had a new, different version. After some careful consideration, I decided that this figure would be my vehicle driver while the blue version would be the co-pilot and gunner. Heck, it worked for me. The bottom line is, I had a perfect specialty for this figure and didn't have to waste any of my other, good, Arctic figures as the drivers of the tank. On this level, Snowstorm became an important part of my collection.

Snowstorms are problematic when talking about their availability. The Eco-Warriors version, while certainly not as common as most of the Battle Corps figures, is still fairly simple to find. The Blue and Orange version is also rather ubiquitous. The version you see profiled below, though, is much more seldom seen. Like most of the 1994 repaints, this guy is difficult to find loose. He is a bit easier to find carded, but still does not appear all that often. I still maintain that most of the 1994 are among the rarest in the entire line. They almost never appear for sale. When they do, though, the interest in these figures is absolutely minimal. Collectors could care less about the '94 repaints and that relegates them to the very bottom of the Joe world. Personally, I feel that these figures are worth picking up now. Most of these figures can be had for under $8.00 for a MOC specimen. As more collectors fill gaps in their collections and leave only the '94's for final completion, I see these guys rising in price and disappearing off the second hand market. The getting for these guys is good right now and I would take advantage before they follow many of their earlier brethren into the stratospheric price ranges.

I like this guy, but am really only after a 1994 Predacon and a 1994 Lobotomaxx. If you have either of these guys for trade, we can work something out. 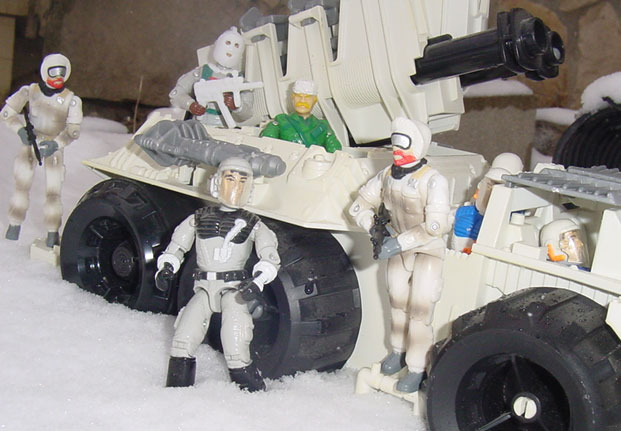