Breaker was my first Joe. For my birthday in 1982, I received the RAM motorcycle. Of course, I had no Joe figures to ride it. My brother had a nice collection he had acquired for his birthday a couple of months earlier, but I had none. The day after my birthday, however, another one of my friends, who had been sick and unable to attend my party the day before, stopped by with a present. It was the '82 Breaker. To this day, I can't fathom the joy that figure brought. Breaker was the one who was shown on the RAM box art as being the driver of that motorcycle. He was also one of the few figures my brother had not yet received. All I had was that one figure and the motorcycle, but they got more use than I can remember.

From that day, Breaker remained a vital part of my collection. I used him on just about all my adventures. The RAM broke several different times, but I always glued it together so that Breaker would continue to have his motorcycle. When it finally died, though, Breaker found a new home alongside Clutch in the passenger seat of the VAMP. His communication device wire fit very nicely into a space behind the figure, so it looked like he was plugged into the automatic gun. Breaker was one of the few original Joes who managed to survive past the first couple of years. By 1984, I had enough newer Joes that the originals were all put away or broken. Breaker continued to get use for a couple of years. Once Dialtone came out, though, Breaker's days were done. Like all the original Joes, Breaker just couldn't complete against the better sculpting and accessories that continued throughout the line. Today, the figure looks very antiquated next to the vast majority of the Joe figures released. Those original Joes remain a vital part of action figure history, but to me, they are better left as display pieces.

Like all great figures, though, my Breaker ended up destroyed. I don't know what did it, but my original Breaker was pretty much gone by 1986. By that time, it was too late to still replace him at retail. For a number of different reasons, I never had occasion to replace that original figure. I've not been keen on purchasing most of the original Joes. I don't like them all that much as compared to later figures. As their price points tend to be higher, I've held off replacing my original Joes while I fill other holes in my collection. However, earlier this year, I was lucky enough to acquire a magnificent lot of figures. Among these is the Breaker you see below. The lot also included a new, mint RAM motorcycle. As soon as I saw the two together, I knew who the new featured Joe on my top shelf would be. While I doubt this figure will get any use, he will remain out, in place of prominence. He is the figure that started it all. While I can be a sentimental fool at times, I think this case is justified.

The Breaker mold was a world traveler. After his use in the US, he appeared in Brazil and Argentina. In Argentina, he was the driver of the Slugger. The mold was also used to create some members of the exclusive and elusive Series 2 Argentine figures that included Topson, Shimik, Redmack, Manleh and the infamous Cobra Mortal. Breaker was slated to appear in the 1997 Stars and Stripes set. But, the mold could not be found and they amalgamated a new Breaker out of Hawk and Roadblock parts. The character never made it to India and we have yet to see the original Breaker return in any format. Personally, I would like a new take on the character that is better than the crappy comic version from 2006. But, this isn't likely to happen at this point.

Breakers are kind of tough to find. Like all the original Joes, he is highly sought after and can command a premium when he is found mint and complete. His communication device is breakable and is often found sans the attachment cord or the mouthpiece. He did not come with a gun, but I gave him the accessory kit uzi you see in the scan below as soon as I got one way back in 1983. Personally, I feel this is a figure that should have a weapon of some sort, but that is an easily remedied problem once you have the complete figure. Breaker will always hold a special place in my collection as he was the one who began it all. While that figure is long gone, it is only recently that I have been able to acquire a complete replacement. He now sits on my new RAM, ready for action. At some point, I'll probably use him, but Breaker's best days are behind him. For now, he is one of my few homages to the early days of both the Joe line and my involvement in it. He certainly reminds of a simpler time when toys were much more fun. Of course, that does not diminish the figure in any way. Sentimentality aside, I still highly recommend Breaker as an essential part of any Joe collection. It just took me 17 years to realize that.

I'm after a couple of the straight armed figures. I need just about all of them. If you've got some available, let me know. 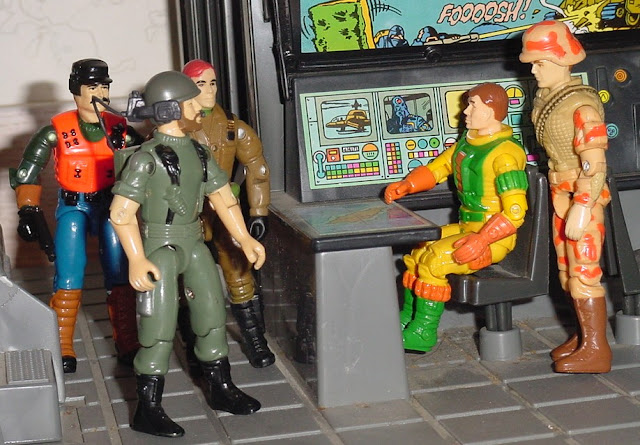 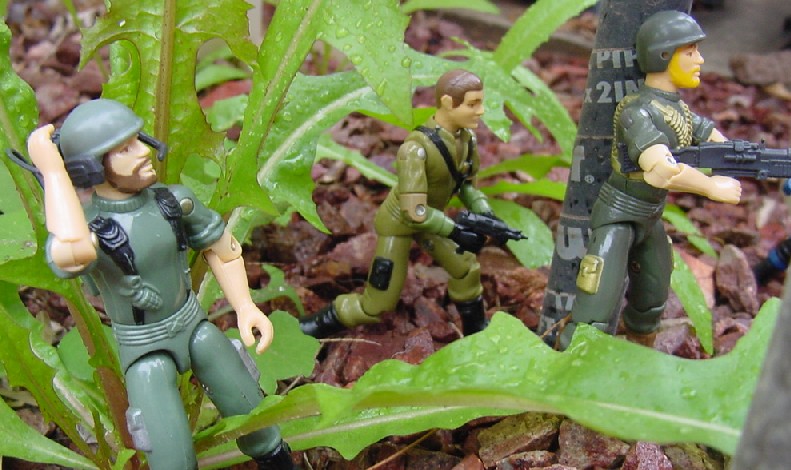 Posted by Robot_Sonic at 1:24 PM
Email ThisBlogThis!Share to TwitterShare to FacebookShare to Pinterest
Labels: 1982, 1983, Breaker, Original 13