In my profile of Ripcord, I stated that a friend of mine had gone to California in early 1984 and had brought back many new Joes. While I couldn't beat him, I did pull the second most major coup of my class when I found three of the new '84's at a Value City only a couple of weeks later. Each of my brothers and I were only allowed one figure so I pawned the Baroness off on my youngest brother since she was the worst of the three. I took Firefly because even back then, you knew he was just awesome. The third figure we found, and the one my middle brother took, was another character we knew of and whose figure I was awaiting: Roadblock.

Of all the Joes, I think the Roadblock character is definitely in the top 5 most famous. He was ubiquitous throughout the run of the line and had at least 7 versions of him made. He was a character that everyone seemed to like and his figures usually lived up to his advanced billing. He was a huge, muscular monster back in the days before wrestlers were considered real celebrities. The thing about his character, though, was that Roadblock was a gentle giant. His love of the gourmet and desire to be a chef didn't fit with the hulking beast you saw on the battlefield. It was this type of complexity that was only achieved with a few of the Joes. In Roadblock, it works to perfection and it produced a character that was popular from his introduction in 1984 until the line's bitter end over a decade later.

There is something that is very interesting about the Joe line. While the figures and characters introduced were heavily caucasian and male, many of the most popular heroes were black or female. Both Stalker and Roadblock were integral characters to Joe media. Their figures were popular and they were given roles of distinction. In this regard, Joe was definitely different from any other toy line. While minority characters have not, even to this day, really found widespread mainstream success in toy lines, in G.I. Joe, they were integral parts of the story line and had figures that were loved. Of course, it's hard to tell that Stormshadow is Asian, but that type of thing was just sort of understood. Race was never a card that anyone in the Joe creative team played, but their handling of such a delicate issue, or lack thereof, helped make Joe just that much more enduring to all audiences.

Personally, I've found it odd that Roadblock has yet to return in any of the Joe releases since 1994. He would have made a much more logical choice as a crew member of the new Mobat over Heavy Duty. I still think, though, that we will probably see him in series IV or series V of the new Joes this year. He is a character that is just too important and popular to be missed. The fact that he has been missing for so long, though, makes me slightly worry that they may have lost his molds. It is known that the '92 version of Roadblock has found a long second life being produced by Funskool over in India. That could explain that mold's whereabouts, but we did get the '86 Roadblock's chest on the awful "new" figures from 1997. Of course, Roadblock was one of the original 4 Joes who were to be produced in 1996 or 1997 in the scrapped idea of boxed sets. That figure would have been a repaint of this version, but, for whatever reason, the boxed idea was abandoned, the TRU exclusive figures were created in their stead, and only Duke and Lady Jaye ever made it to plastic in their originally showcased form. Still, this is enough to think there must be at least enough parts out there to create a new version of Roadblock from old molds. He is a key figure and one that, like Flint really needs to make a reappearance in order to really give the line a strong connection back to its roots.

Since I originally wrote this profile, the V1 Roadblock mold has been resurrected by Hasbro too many times for it to be relevant any longer. Hasbro used it for Double Blast in 2001, Roadblock in 2002 and again as the Night Force Roadblock in 2004. Of these, only Double Blast included Roadblock's original accessories. And, without those, you start to realize that the Roadblock mold in and of itself is a bit boring. To date, I still like this figure as the iconic version of Roadblock and consider it be a significant figure. But, for the Roadblock character, I have taken to using the many later molds that offer a bit more.

This version of Roadblock is not very difficult to find. He was made during one of the most successful years in Joe history, and was a very popular figure of his year. His accessories, though, pose a bit more of a problem. For whatever reason, Roadblock's pack has a little peg on it that is designed to hold the stand to his machine gun. This little peg is extremely brittle and is easily broken. It is an affliction of both this version and Tiger Force Roadblock. His gun, while very cool, is also brittle. Leaving it on the stand makes it susceptible to its own weight and causes the barrel to sag, or even snap. The tripod is also brittle. It is also the one accessory that I continually stepped on throughout my childhood. However, only a slight pressure will break one of the legs and leave you without this accessory. All that being said, good luck finding one whose accessories are in excellent shape! Seriously, though, they do make mint, complete Roadblocks a bit tougher to find. As such, you can usually get a mint complete specimen for under $12.00. This guy appears in all sorts of lots, though, and can really lend himself to bargain hunters who are willing to sort through some large lots for a shot at a good example. This figure, though, is kind of a necessity to a Joe collector. It is, as far as I and many other collectors are concerned, the definitive version of Roadblock and the one that best represents the character.

While I do like Roadblock, I don't really need any more of him. Unless, though, it is his 1994 Star Brigade version. If you have some of those with which you wish to part, email me. 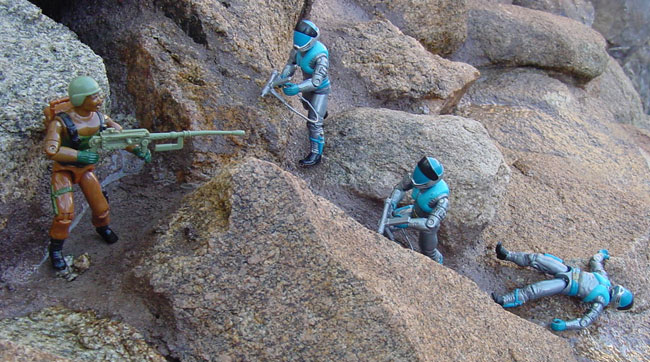 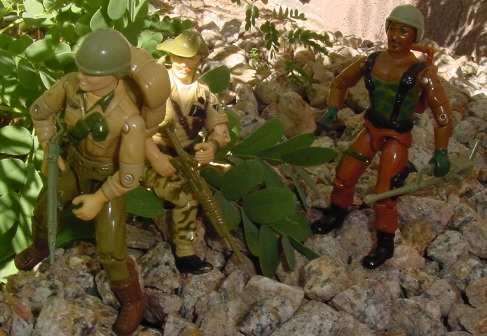 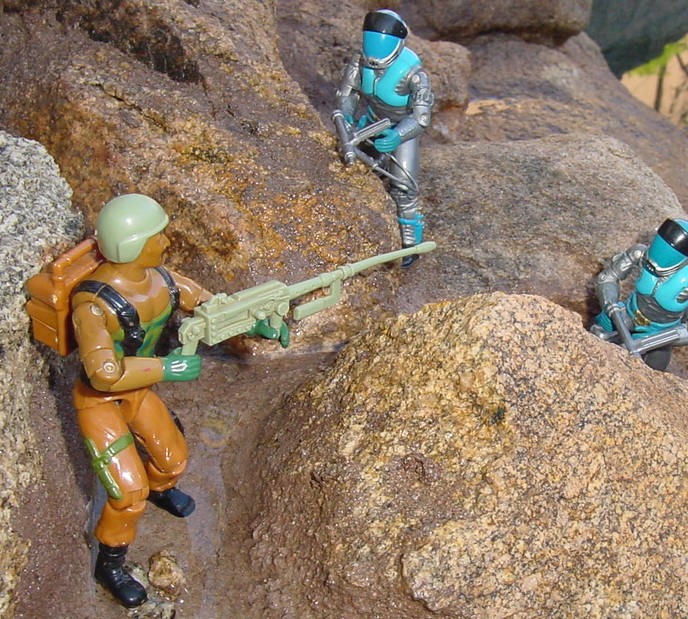 Posted by Robot_Sonic at 4:45 PM
Email ThisBlogThis!Share to TwitterShare to FacebookShare to Pinterest
Labels: 1984, Roadblock