Just about all Joe collectors agree on one thing: 1985 was the single best year for Joe figures in the entire run of the line. While I'm not sure I agree with the figures being the best, 1985 is certainly the most important year in Joe history. While 1984 was full of great characters like Firefly, Zartan, and Storm Shadow and was the year that Joe really started to enter the mainstream, it was the flurry of the 1985 figures and characters that really ushered in Joe's golden age.

While certainly not one of the stars of the '85 line, Barbecue is one of the supporting role players from that year, the same as figures like Airtight and Alpine. He was not a major character and didn't play a huge role in any of the Joe media. What he was, though, was a figure that really was a necessity in the line. Some people don't think of a need for a firefighter in a combat unit. (Most notably, Shipwreck from issue #40 of the Joe comic.) Without the firefighter, though, who would put out the burning Skystriker and save Ace after he crash landed on the deck of the U.S.S. Flagg? Barbecue is the type of figure that any line with the diversity of Joe needs.

In 1986 and 1987, the Hovercraft was my favorite Joe vehicle. Just about every mission I created occurred at sea. I used my bed as an aircraft carrier, since I couldn't con my parents into paying just 69.99 for a Flagg at TRU, and had my Hydrofoil attack it. Naturally, the Hovercrafts went out into the fray after the Hydrofoils. On one mission, I had the Hydrofoil hit the depth charges on the Hovercraft. As the crew couldn't put out the flames, the craft exploded and most of the crew was killed. (As I've said before, I have army builders for my Joes as well. It was very easy for me to sink a hovercraft crew without breaking from major continuity by killing major characters.) After that incident, a firefighter was assigned to every hovercraft crew. He was such a vital position, that I went out and bought myself a new Barbecue right before he disappeared from retail just for this purpose. I wanted a figure that would be able to hold up to the new duties I had assigned to him. While that figure is still around, though in much poorer condition than I would like, the figure you see below is an upgrade from earlier this year. You may have heard of the great lot of figures I acquired earlier this year from some other profiles. This Barbecue figure is among the many treasures that I found when I opened that box.

As time went on, Barbecue found himself being a standard on not only hovercrafts, but the Tactical Battle Platform, in the Joe headquarters, and at any airfield. He became a figure that was called upon in time of emergency, usually after the combat had ended. He continues in the capacity to this day. Now, I've got 6 Barbecues. While I acquired this many during a short stint where I used him as a prison guard and executioner, I'm now glad that I've got them. I can keep one in the hovercraft and in the headquarters and still have a few in reserve. He is a figure that I use fairly frequently, though pay little attention to. He is also a figure that I tend to forget about until the last moment. When I finally brought my Hovercraft out to Arizona, Barbecue was only added at the last minute to the inaugural voyage out into the pool. After I put this figure out there, though, I decided to use his second Eco-Warriors version from 1992 for any more dips in the pool. While this original version is lots of fun, the second version fit what I was doing at the time as he looks more like a diver (the figure is the basis for the mold of the 1993 Payload) and doesn't have small accessories that can easily be sucked down the drain. Now, this version of Barbecue is always used when I use my hovercraft indoors. When they actually go into the pool, the 1992 is called upon for duty.

Barbecues aren't too tough to find. Of the '85's, he is among the most common. Finding one complete with no paint wear on his face, though, is a bit more of a challenge. Barbeque's gun is among the smallest in the line. Since it was attached to a hose, that reduced the possibility of loss. For my friends and I, though, that hose was just in the way of a really cool guy that actually attached to the figure's leg. As such, the gun is most often missing piece on Barbecues you find today. Still, though, even mint, complete Barbecues can be had for next to nothing. He is a figure well worth adding to your collection, though, as he plays an important role that needs to be filled. I can't imagine any airfield without at least 2 Barbecues present to handle fires. As such, I expect Barbeque's will never get any press, but will remain in people's collections for realism reasons. On that level, the figure definitely works. Beyond that, I'm not sure the collecting community at large will ever go for this guy. That's okay, though, as it allows those who do appreciate Barbecue to quietly add them to their collections.

There are people who have no use for firefighters in a combat unit. Personally, I think this figure a necessity to the line. How do you feel? 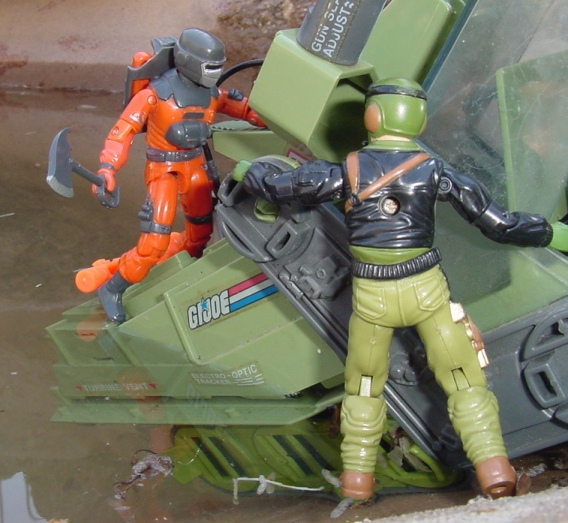 Posted by Robot_Sonic at 4:43 PM
Email ThisBlogThis!Share to TwitterShare to FacebookShare to Pinterest
Labels: 1985, Barbeque, BBQ