In high schools and colleges throughout the country, the fans have their special chants to help spur on their team. Whenever an underdog is about to win a game on their home floor against a higher ranked opponent, the chant usually starts. "Over Rated. Over Rated. Over Rated." I don't think there is a figure in the entire line to whom that phrase is more appropriately applied than the original Bat.

Bats are just lame. I've already profiled the second version of the Bat, but told you that I use him as a human, not a brainless robot. The notion of robotic troops was really a direction in which Joe did not need to go. The thing about Cobra that made them the threat was that they had a highly organized and fully staffed army. It was the Cobra soldiers who made the threat real. Bats did nothing to further that. While they showed that Cobra was on the cutting edge of technology, they helped to reduce the validity of the Cobra forces. With these guys in place, Joe could easily mow through Cobra ranks and win battles against staggering odds. While I understand that the good guys had to win, it made Joe less interesting when Cobra became less a menace.

I think that one of the reasons that Bats were created is the same reason why George Lucas used Battle Droids in Episode I. Having Joes destroy tons of bloodless robots was much more acceptable to TV cartoon censors. While killing humans was relatively taboo, the cartoon creators were free to destroy as many Bats as possible. For that reason, I think of this figure as a cop-out. Rather than face the grim realities of combat, like many '80's cartoons did, the Bats put a shiny, happy, metallic face on warfare and its outcome. The early issues of the G.I. Joe comic dealt with death. Many Cobras, and civilians, died. Once the Bats came along, the carnage was toned down. Did anyone die when the Joes invaded Cobra Island in issue 41? These guys were the beginning of Joe losing its edge. The thing that made Joe so enduring to me in the early years was the realistic slant of the Comic and figures. Once the comic was bogged down in Serpentor and his ilk, I lost a lot of interest in Joe. I finally gave up on the franchise right as the comic was saved with Serpentor's death and Cobra Island civil war. Fortunately, this brought me back. I have yet to leave again.

I think the single thing I find most maddening about the Bat is that he is so loved by collectors. Frankly, the Bat is enjoying the success it does because of the time in which he was released. In the '80's, most now adult collectors were kids and the idea of robot soldiers was pretty cool. Compare the following concepts: robot troops, space troops, cyborg troops, high tech troops. Why is it that all except for the Bats are held in the utmost contempt by modern collectors? The answer is simple. By the time the Star Brigade came out, most of us adult collectors were no longer children and we lacked the imagination to integrate Star Brigade into our Joe universe. Had the Bats come out in 1993, they would be just as hated as the Cyber-Viper. That being said, though, it does bode well for the future popularity of Star Brigade and many of the currently "wacky" concepts that were being tried near the end of the line. As the kids who consider that stuff to be the epitome of Joe grow up, they will feel nostalgic for the figures that current collectors tend to disdain. While I don't see the Blackstar ever supplanting the popularity of the Crimson Guard, I do think many of the '93's and '94's will gain in collector support in the next few years.

The BAT mold had a decent history. After it was used in the US, it was sent down to Brazil. There, the BAT was released as Roboid. The colors are very similar to the American BAT. From there, the BAT migrated to India. He was released in India for a short window of time in the mid '90's. These bats featured stickers for the chest rather than the holograms. In 1997, Hasbro re-acquired the BAT mold. The legs and waist were used on the 1997 Viper and all subsequent Vipers up until 2006. In 2003, Hasbro produced the BAT Army Builder pack. This included the unpopular 1991 BAT mold and failed spectacularly. This is notable, though, as shortly after this debacle, Hasbro reps made public statements that the entire '86 BAT mold was available. However, it appears Hasbro spoke out of turn as the rest of the original BAT mold has never appeared. In 2008, Master Collector recast the V1 BAT head, backpack and attachments and included them on an exclusive BAT figure in their convention set. That was largely taken as a sign that the original BAT mold is now gone. The reality, though, is that were this mold to be brought back, it would be immensely popular with collectors. Even the Master Collector figure has potential and is a decent army building figure. Maybe one day, the rest of the body will return. Until then, though, collectors have a few alternatives to sate their BAT needs.

As a warning, there are several bootleggers out there who have reproduced BAT accessories in colors similar to the original colors. If you are buying BATs sight unseen, be sure to verify the accessories are the originals. These bootlegs are often slightly different colors than the BAT, itself and can be seen in the 2nd photo below. These aren't as available as they once were. But, enough made it into the market that the buyer now has to ask questions about the authenticity of complete BATS when you are in the market for new samples.

Bats are incredibly popular figures and sell for ridiculous amounts. I don't know why. People really, really like the Bats and are willing to pay outrageous sums for them. Of course, the Bat is a figure that comes with many small and easily lost accessories. Also, his paint easily rubs and the holograms on their chests are prone to falling off. It is very, very easy to find beat up, incomplete Bats. Finding mint, complete specimens takes a little more patience. They will also cost you. A mint, complete with filecard Bat will usually fetch between $22 and $28. Even a mint Bat with only one or two attachments will cost you over $15.

Considering how popular these guys have always been, that's way too much. Much like the Crimson Guard and Eel, the Bat's price is not indicative of his scarcity. These guys came out during Joe's peak popularity and were produced in incomprehensible numbers. Once again, I refer you to Cobra Command Online. Check out his Bats diorama. You will see that mint, complete Bats are plentiful. Of course, that doesn't make them any less expensive. Frankly, I don't think they are worth the price. As Ebay sales seem to indicate, though, I'm in the vast minority on this point. I'll leave the final decision up to you, but know that I can not justify that kind of money for this figure.

Bats suck. End of story. I don't want any more. If you wish to try to convince me that the Bat is a good figure, email me. 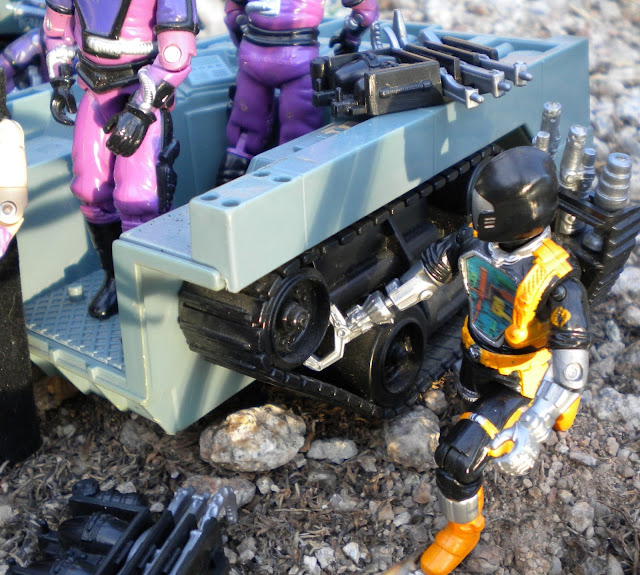 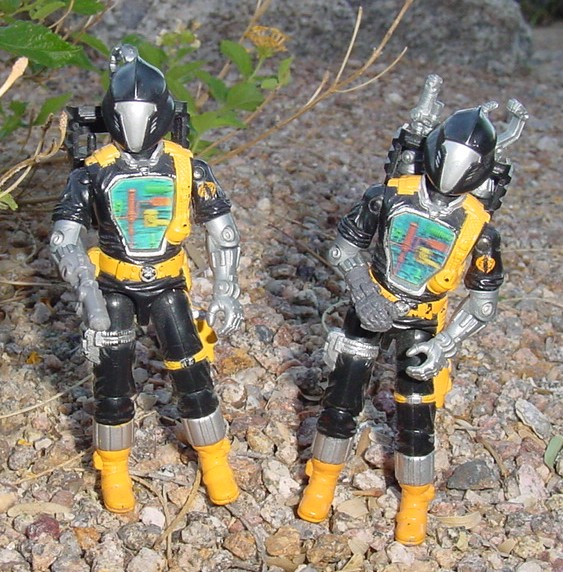 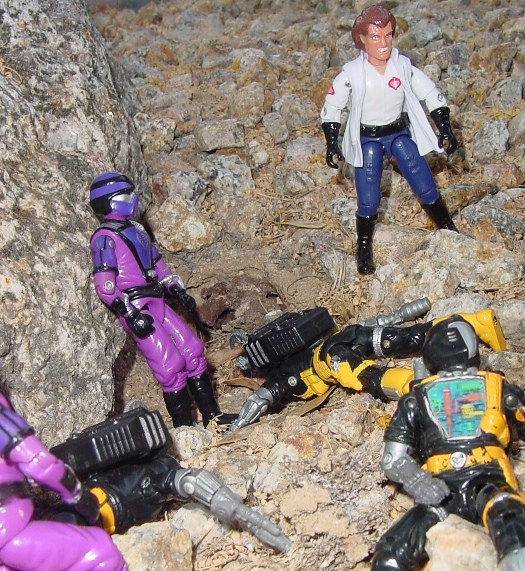 Posted by Robot_Sonic at 8:15 AM
Email ThisBlogThis!Share to TwitterShare to FacebookShare to Pinterest
Labels: 1986, BAT, Battle Android Trooper