Back in 1989, I didn't buy any Joe figures. I had picked up a couple of '88's, but that was it. I was still buying the comic, though, and was keeping up on the awesome new figures that were released that year. Of these, there were a ton of figures that I wanted. While pining away in Spanish class, I wrote up a story involving many of the older Joes that I had quick access to along with many of the new figures for 1989 that I didn't have. I figured that I would one day have the '89 Joes I wanted, I just didn't think it would take almost 9 years for me to finally add the 1989 Rock and Roll to my collection.

There are a number of reasons why I wanted to profile this figure. First off, Rock and Roll is an original character who finally got a well deserved remake. Secondly, I really wanted this figure back when he came out at retail. As I was out of Joe at the time (stupid high school years!), I never acquired him. Third, this is a great figure that comes with some of the most imposing accessories of any figure in the line. Any of those reasons would be enough to profile this guy. Sure, this guy is not the classic original figure that was Rock and Roll. The elements that made the character so popular, though, are all present in this updated version. He has the blonde beard, big machine gun, and surfer look. Taken as a sum, you've got a very cool figure that is worth another look.

This version of Rock and Roll was kind of problematic for me. The reason was the simple bulk of his weapons. Real cannons like his would eat through all the ammo he carries in about 3 seconds. Also, the weapons were so large that they would weigh down anyone who would have to carry them. Naturally, being slowed by hundreds of pounds of gear would make a soldier an easy target for enemy fire. How, then, could I use this figure in actual field combat situations when the innate skeptic in me said that there was no way for him to be effective in the field? The answer was simple: Rock and Roll was based as vehicular support.

Traveling in the APC, Rock and Roll could easily carry enough ammunition to wreak some serious havoc on any enemy installation. When the need would arise, though, I would have him don his original version's M-60 and go into the field with the classic Rock and Roll weapon. Being in high school, though, I saw a lot of my friends sustain knee injuries. After a while, I put another spin on Rock and Roll. He damaged his knees in a parachuting accident. He still had the strength that was evident from the comic, but he changed to a more stationary gunner after he lost most of his mobility. It added a level of depth to the character as he was forced to deal with his physical shortcomings. I liked to add a human element to my Joes. It made them more real for me. While most elements of Joedom had the heroes as just that, I preferred them slightly flawed. Having Snake Eyes be invincible really turned me off to the character. I don't know any superheroes. I wanted Joes that emulated life as I knew it: good people with remarkable abilities, but who had human flaws they had to overcome. Call it whatever you like, but that was what made Joe real to me.

All that being said, I've never much used this figure. Why? Simple, I didn't get him until the late '90's. At that time, I was out of standard field combat scenarios and was more focused on more urban set story lines. As such, figures like Shockwave, Law, Mutt, Alley Viper, and Stalker became the type of guys that I wanted to use. All of the Rock and Rolls that I acquired were dropped into the '89 Joe drawer and seldom saw any use. Lately, though, I've seen myself return to classic combat scenarios. My new backyard hearkens back to my childhood when I played with my Joes outside nearly all year round. The long grass and lack of definitive features just seem to call for some classic combat usage. I've also found myself returning to the classic definition of the Cobra. Before, I liked to use specialty Cobras for a number of purposes. Now, I find myself using the standard trooper and some of the more infantry minded Cobras more than ever before. Naturally, the more field combat oriented Joes are finding themselves in a much heavier use rotation as well. I've kind of come full circle. We'll see where I am after a few months of this.

This Rock and Roll mold has a somewhat interesting history. After this release in 1989, Hasbro brought the figure back again in 1991 as part of the Super Sonic Fighters line. This figure featured horrible orange trim in lieu of the muted tan. At some point in the '90's, the mold was shipped to India. There, Funskool released it in colors nearly identical to the Super Sonic Fighters version. This figure, though, likely saw a very short release window. It seems that Hasbro recalled this mold shortly after Funskool started production. Hasbro intended for this version of Rock and Roll to be included in the 2001 Headquarters. For whatever reason, though, Hasbro didn't use the mold. (The used the '94 Flint mold instead.) Hasbro then returned the mold to Funskool in 2001 or 2002. Somewhat dismayed at Hasbro's return of the mold, Funskool decided to re-use it for a new figure that was going to be released in 2003. However, Rock and Roll was pulled for another figure and the Funskool Joe line was cancelled before Funskool ever got around to reinterpreting the Rock and Roll mold. At this point, this figure could be anywhere. However, it is likely that Hasbro once again has access to it and this figure remains a viable candidate for re-release at some point in the future.

While I kind of searched for this guy for a while in my attempts to add him to my collection, it was only after I did so that I realized how common a figure Rock and Roll really is. This guy is everywhere! He can easily be found loose, loose mint and complete, and carded. Best of all, none of these incarnations of him is expensive. Like most Joe figures, Rock and Roll can be had mint, loose and complete for next to nothing. I don't know why that is. Sure, modern collectors build Cobra armies, but they still need Joes for them to fight. This version of Rock and Roll, though, does not lend himself to Joe army building. As such, one is all you really need. Of course, this is an excellent opportunity to add one of these guys to your collection. You can acquire a cool figure for just about nothing. This is a figure that I really wanted. Even now that I have him, he's pretty cool. I think you will find him the same.

While I like this figure, I don't need him. However, should the Rock and Roll and the proposed '01 G.I. Joe headquarters come out, I will need that figure. I'm also after the dark skinned version of the 1997 Rock and Roll. If you can help me with either of these figures, email me. 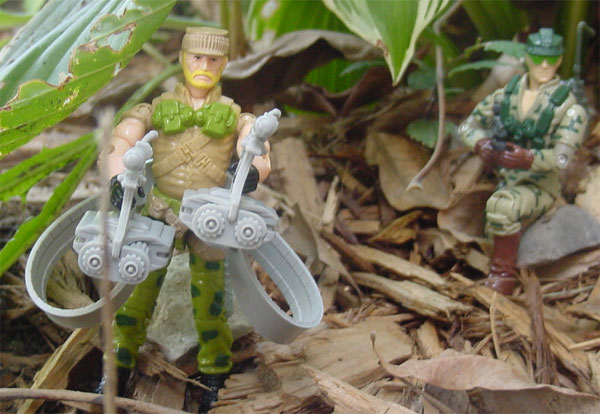 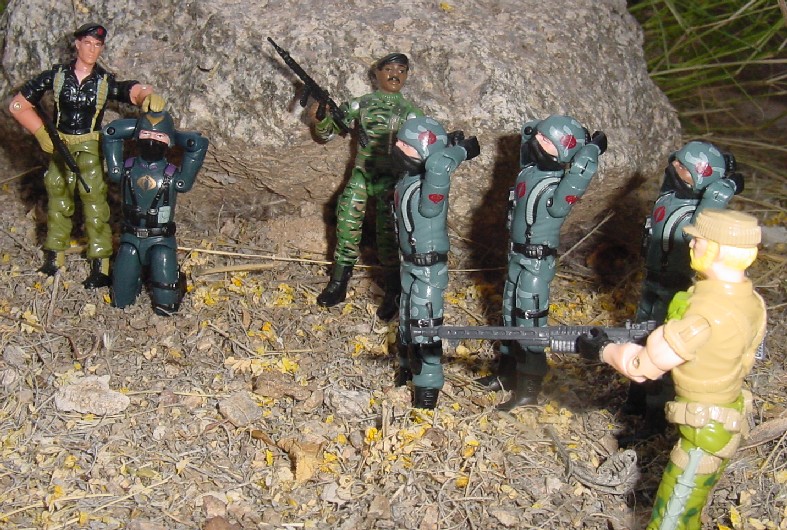 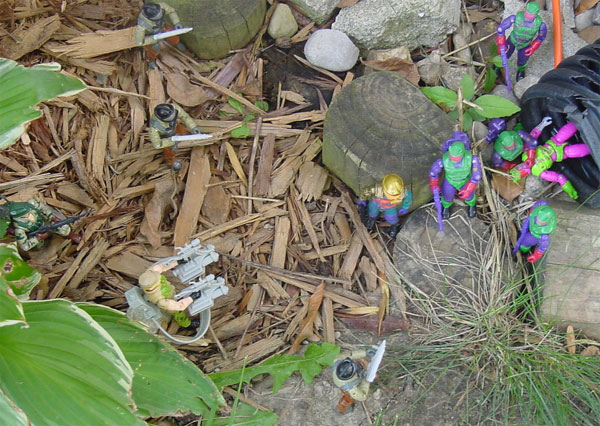 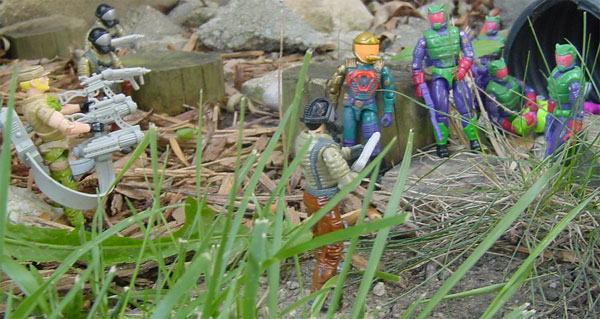 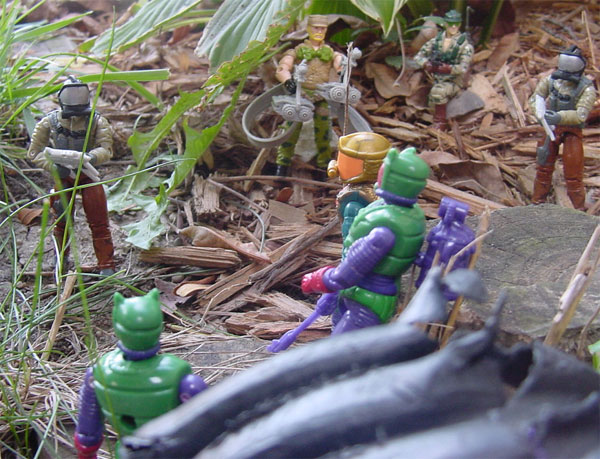 Posted by Robot_Sonic at 12:40 PM
Email ThisBlogThis!Share to TwitterShare to FacebookShare to Pinterest
Labels: 1989, Rock and Roll