I figured I would do something a little different here. I haven't profiled a carded version of a loose figure in quite some time and thought I could use this opportunity to showcase a little information about Brazilian cardbacks.

First off, Estrela Brazilian cardbacks are not of the same quality as the American cardbacks. They are stronger than the sturdy writing paper that Funskool passes off as G.I. Joe cardbacks, but they are not as sturdy as even those from the currently released figures. When you purchase MOC Brazilian figures, this is something to keep in mind.

Second, the unique card art that was produced in Brazil is easily on par with that of American figures. Again, most of us have seen Funskool's attempts at card art. While well intentioned, they don't live up to the American art that most of us are most familiar with. That is not the case in Brazil. Some of the earlier art, like Sparta, Tan Grunt, Airborne, Ripcord, and the infamous Cobra De-Aco is rougher, but these later Patrulha do Ar figures have cart art of exceptional quality. By the 90's, Estrela was producing some Joes for Hasbro to distribute in the U.S. Guys like Rampage, Slaughter's Marauders, and the Arctic Commando Dee-Jay were all made by Estrela for U.S. consumption. The high commitment to quality shows not only in the figures, but the detail that went into the package art as well.

Third, Estrela cards are made of a darker cardboard than the glossy American cards. This is most noticeable in most scans you see of Brazilian cardbacks and filecards. Most scans look like they were taken with a low quality scanner that could not produce enough light to properly illuminate the image. This is not the case. The cardbacks are made of darker cardboard that is not nearly as sharp as the gloss coated American figures. This, I think, is part of the problem with the flimsier cards. Without the coating, the printing colors are not as bright and are somewhat difficult to see. The cardboard certainly doesn't hold details like the more glossy backings. Of all the features, this was the most striking when I first acquired a carded Brazilian figure.

There is one other little note I feel I should mention. I've opened several Brazilian carded figures. One thing I've noticed is that figures with helmets, like the Patrula do Ar and the Forca Eco, tend to have a little problem. It seems the plastic of which the helmets are made is starting to degrade. Both figures I've opened that came with helmets (from different sources) have had helmets that have become tacky and soft. In fact, they are even starting to seep into the cardback. I haven't seen the problem on any figures, or accessories other than helmets. I don't have any loose figures that have been loose for longer than this year, so I don't know if the degradation is an effect of the helmet still being in the bubble and not being able to breathe, or if all the helmets will eventually succumb to this. I know many vintage Star Wars figures have had this problem. I just offer this as many people who have some Brazilian figures tucked away with the hopes that they will one day retire from their sale may be surprised to find a puddle of orange goo that has seeped through a cardback and ruined a great part of their collection. Just something to think about.

All in all, the carded Brazilian figures are very nice. They display well and mesh with a diverse Joe collection. Personally, I prefer to have the figures loose, but not many people seem to agree with me. As more people are exposed to these foreign figures, and complete their American collections, perhaps that will change. Until then, I enjoy having guys like this in my collection and think you will as well.

This guy rocks! Who is your favorite foreign figure? Let me know. 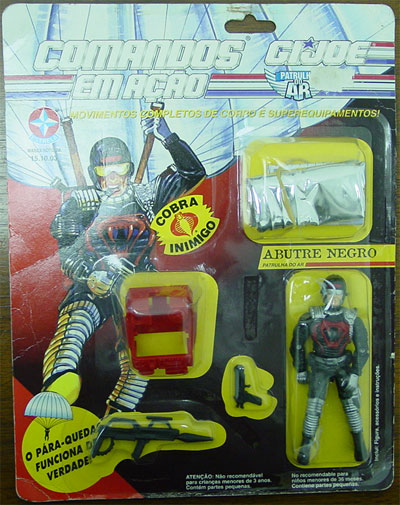