We all know that there are newly sculpted Joes coming out. In fact, the first wave of O Ringless Joes is currently hitting retail outlets all over the country. We have all heard rumours and innuendo about the future of the line. How much of it is fact, and how much is speculation will be determined in time. At any rate, though, the classic look to Joes is no more. I'm not, though, going to get into any feelings about the new figures. Personally, I have yet to see them. When I do, I will make the determination if they will be become part of my collection or not. That being said, what is the fan of the classic Joe figures to do? Hasbro has kept us interested for the past year with the re-releases. Beyond that, though, there is only one other outlet for collectors to get a classic Joe fix: the figures produced in India by Funskool.

Funskool released some great new figures in late 2000 and early 2001. They offered fantastic repaints of General Flagg, General Hawk, and the Desert Scorpion. With that track record, I figured the late year releases would continue that trend. When I heard the next figure to be offered by Funskool was Red Dog, though, I was disappointed. I've always hated the Red Dog figure. The original Slaughter's Marauders pack had three members, Red Dog, Mercer and Taurus. Of the three, only Mercer found a home in my collection. Red Dog and Taurus became afterthoughts who often filled criminal or civilian roles. The characters did nothing for me and I found the figures lame. I just didn't think that a version of Red Dog would interest me. How wrong I was....

The minute I saw a picture of this Red Dog figure, I instantly knew he would have a home and a very important purpose in my collection. The former Samoan was now done as a Caucasian. Unlike other race changing figures, Red Dog kept the facial features that had previously distinguished him. The pale skin just screamed "albino" to me. As such, this new Red Dig figure became a new criminal, an albino Dreadnok named ZinZan who has taken over the group now that Zartan has gone off to become a part of the Cobra hierarchy. He is a new, ruthless leader who runs drugs, guns, and anything else that will make him money. He is a character that is more deadly than other, established Joe characters, and has the law enforcement world very nervous. He has made the Dreadnoks a more powerful criminal element while keeping them true to their mischievous biker roots. Again, like so many figures that I tend to use often, it is the character I've made for this guy that is his drawing power.

If you are a long time reader of this site, you know that often times I acquire two figures simultaneously and those figures become forever linked. (See Interrogator and Night Vulture.) Such is the case with this Red Dog figure. At the time I acquired him, I also picked up the notorious Super Cop figure, also from Funskool. He is an amalgamation of Sgt. Slaughter, Iceberg, and Hawk. He is a very nice figure and an excellent example of a law man. Naturally, he and this Red Dog character have become mortal enemies. Once again, though, that kind of backstory makes this figure incredibly fun. He is very distinct from the American Red Dog and can be used as a totally different character without too much stretching of established Joe story lines. His color scheme is not too out of whack with what a villain like him would wear and isn't the typical over the top Funskool style. He is a perfect example of a foreign figure being utilized in a primarily American collection without losing anything in form, function or style.

As this figure is a relative newcomer to my collection, his role will mature with time. Unlike many of the figures I've recently acquired, though, I welcome whatever this figure will become. His unique nature really makes him stand apart from what Hasbro has offered the American market in the past year. Aside from a few gems, most of the new releases have been relatively uninspired and show a sameness to them that makes most of the Joe characters simply run together. Having figures like Red Dog available provides some fresh air in the Joe world. Sure, this figure doesn't fit the traditional role of a military based toy. However, Joe's success did not come from it's pure military roots, it came from the expansion of the line to more distinct looks and characterizations. When all the figures look the same, there is only so much you can do with them. When there is great diversity in the line, it really opens up and expands play options that make the line enduring. Hopefully, the new Joe sculpts will remember that. I don't want all olive drab Joes. I want some in some different type of uniforms that allow for them to expand upon their traditional military roles and allow them some leeway in use. I don't think I'm alone in this thinking.

Red Dog is easy to find. A number of online retailers are currently selling him for about $4.00 for a MOC specimen. He was just released this year, so he should be available for a good long time. With that in mind, I'd continue to look to Funskool for some nice figures releases in the next year. Sure, some figures like the Wild (Wacky) Bill are a bit out there, though cool in an the offbeat, innocent way toys should be, but others, like the Crimson Guard Immortal have become staples of most people's collections. Funskool seems to rotate the figures they offer. With any luck, 2002 will provide us with some old favorites as well as some new guys we are not expecting. They will, though, continue to be a great outlet for collectors to keep acquiring classically molded Joes. Personally, I've found the quality on this Red Dog figure to be excellent. His paint masking is sharp, the details are nice, his accessories work with him, and the figure is well constructed and moves freely. From a toy standpoint, what more can you ask for? I know that Funskool will be one of my primary focuses next year, regardless of whether or not I like the newly sculpted Joes. They offer interesting and fun figures with decent quality at an incredibly affordable price. That's all I look for when I'm after Joe figures and I know you will not be disappointed in Funskool figures at all.

I like this figure, and most of what Funskool has done. If you have any older (pre '95) Funskool figures available for trade, email me. 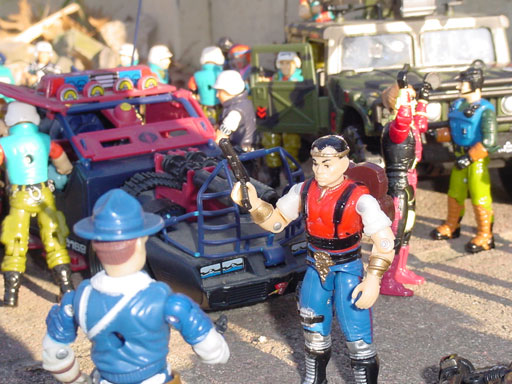 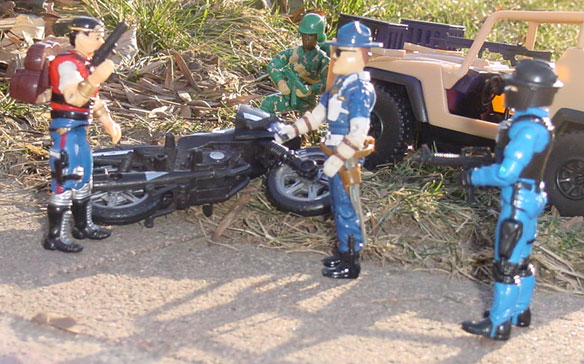