In my time in the online Joe world, I don't think I've ever seen a wave of figures that was more highly anticipated by collectors than the new Wave 2 Joes. Sure, the Wave 1 figures were big news, but most people greeted them with trepidation in lieu of anticipation. With Wave 2, the changes in construction and articulation created a level of excitement far beyond the simple repaints. Many collectors viewed this as Hasbro's final chance to prove that they could get Joe right. Other looked at this as a next logical step in the progression of the newly sculpted Joe figures. Others saw this as a prime opportunity to expand their collection of sole new sculpts. Whatever the reasoning behind it, though, there was quite a buzz in the online collecting world when these figures finally became available. While most others have long since expounded on the merits and limitations of these figures, I have chosen but one to highlight. It is the figure that I'm most impressed with, overall, and the one that, to me, showcases the line's still untapped potential: Sgt. Stalker.

My overall impressions of these figures is that Hasbro is oh so close to getting it perfect. These figures hearken back to the lines glory days in both creativity and overall quality. However, there is still something missing. At first, I had thought it was simply my adult skepticism that dampened my overall impression. However, I've come to realize that there are still some kinks inherent in the figures. When I opened Stalker, he felt very close to a newly opened vintage Joe. However, the sculpts still need some work. The room for improvement is there for these figures. The final judgements (and, probably, success) of the line will be based on whether this gap is filled or left void.   While the figures are well designed, they are still disproportionate. This issue goes beyond the bulky shoulders that are necessary for construction. Stalker has a very short chest. If you look at him, the figure is, literally, all legs. Now, much of this can be explained away by the history of this line. While Wave 2 is the first of the new sculpts to feature O-rings, they were not initially designed that way. This wave was originally to be in the same style as the Wave 1 figures. Collector backlash over the O-ring omission resulted in Hasbro rethinking that plan. However, future figure waves were already past their most conceptual design stages. As such, some of the problems that you see in the sculpting of these figures can be traced to the fact that these figures were changed mid-stream to have the O-rings. (That also caused the considerable delay between Waves 1 and 2 and gave us fine things like Wave 1.5 and the Wave 1 repaints.) As we move ahead into figure waves planned for 2003 (for which we have yet to see any prototype photos) I think these issues will resolve themselves. However, as Hasbro seems intent on including older molds in new colors in future waves, some of these old sculpt limitations will continue to manifest themselves as the line progresses.

Beyond these design problems, though, the figures are well done. Stalker has wonderful and the sharp, vibrant colors that make him stand out. While the Wave 1 figures were well detailed with numerous extraneous trappings, Stalker, and his Wave 2 brethren, are toned down in detailing to the point where the small sculpting makes sense. The details are reminiscent of those done on original sculpt figures as they enhance the figure and actually serve a purpose without taking away from the overall aesthetic feel. In this sense, the Wave 2 figures really show a more thoughtful approach to toy design. There was definite consideration put not only into the look of the figure, but also the function behind those details. The large knife on Stalker's chest is a perfect example. While Wave 1 figures were full of pouches and straps, the Wave 2 figures have a more subtle approach that better serves the long term interests of the line.

I will say, though, that the sound tech weapons have got to go. If the figures included one accessory that had the sound tech built in, I could live with that. However, seeing all these potentially wonderful accessories ruined by the sound tech chip protruding from the sides is a little much. The new figures have many weapons, some that have not been released since their original incarnations. Using these would be a perfect supplement to these figures. Having them sound tech, though, renders them useless. I refer the Hasbro designers to the Simpsons toy line by Playmates. Every figure in this line has a sound chip embedded in it. They are completely innocuous and do not detract from the look of the figure. Had this approach been taken, I would have no issue with the sound tech technology. Having it destroy the vast majority of the accessories included with every figure, though, makes sound tech a nuisance of the highest order. In later waves, I hope to see some improvements made to the execution of the sound tech chips if they are to be part of all future endeavors in the new Joe line.

On top of all that, this is a great representation of the Stalker character. He is reminiscent of the original Stalker figure and is a nice update that pays homage to the character's roots. As we are starting to see, this is an approach that Hasbro seems to be taking with the new line. Upcoming figures like Flint, Dr. Mindbender and Beach Head are all awesome updates to their original figures and show a great sense of history in the new line. This approach should keep collectors happy while still offering a great new generation of toys. As Hasbro is also continuing with some new characters who are interspersed with old favorites, this new line will not simply become a rehash of the original concept and will have a chance to stand on its own. While there will always be some naysayers about anything that is a not a Joe produced prior to 1987, I think this line is starting to show great strides towards becoming a toy line for the ages. It still has the long shadow of the original line's legacy looming over it, but I think that the Joe vs. Cobra line is showing the type of creativity and attention to detail that made the original line so enduring.

The future state of this figure, and this entire wave's, availability has yet to be determined. It appears that at least three waves of figures will hit U.S. retail shelves prior to the Christmas holiday. If these waves all ship exclusively, then I think that the one or two month shipping window for these figures will result in extreme shortages. However, my personal feeling is that waves 2 through 5 will ship concurrently. As such, it will probably be possible for some people to actually find wave 3 figures before they find wave 2. This does not mean that Wave 2 will not be available and I fully expect it to ship through the end of the year. As history has shown, though, not taking advantage of this longer, yet still short, window of opportunity usually results in many people missing out on a figure that they thought they could get at a later date. As such, if you have chance to acquire this figure, I would certainly do so. I have found him my favorite new sculpt figure and mark him as an excellent representation of the Stalker character. Whether you like the new sculpts or not, I think that this guy could win you over. I've found him a great addition to my collection and suggest him as an augment to yours as well.

Right now, I'm well set for this figure. I think he will be very available in the short term future. What do you think of these Wave 2 figures? Let me know. 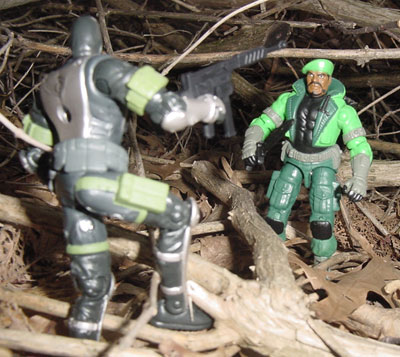 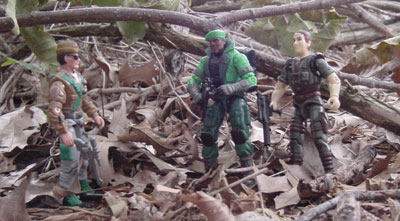 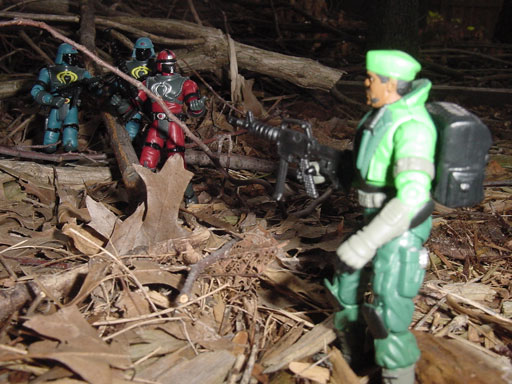 Posted by Robot_Sonic at 11:05 AM
Email ThisBlogThis!Share to TwitterShare to FacebookShare to Pinterest
Labels: 2002, JvC, Stalker