Back in early 1997, I had just finished college and was living with my parents in order to save some money before I moved to Arizona. During that time, I was mainly into Star Wars figures and spent my toy-finding time searching for them. However, one day while in my local comic store, the clerk (who knew I was a long time Joe fan) told me they had just gotten some G.I. Joe figures in and asked if I might be interested in any of them. At that time, my Joe collection was limited to what I had left over from childhood and what I had acquired at retail in the recent years. As such, there were many figures from the early '90's who I was not familiar with. As I searched through the three dozen or so figures they had, I found three Cobra figures that I did not have in my collection: the Range Viper, 1989 Alley Viper, and the Annihilator. All three of these guys were, in my opinion, very cool figures who needed a great purpose in my collection. Over the course of subsequent weeks, I devised a new direction for my Joe world where Cobra created Urban Death Squads: bands of highly trained troops who were capable of destroying a small town in a matter of minutes and then disappearing without a trace. The purpose was twofold: to strike fear into the hearts of Americans and also to create ghost towns that Cobra could then buy up (using their Bermuda based reinsurance operations as the financier) and then rebuild into surveillance and recruiting centers. Naturally, the three aforementioned Cobras comprised the bulk of these forces.

By 1998, though, I had started acquiring many new Cobra trooper figures. As such, the roles of the Urban Death Squads were expanding. They were now attacking larger urban centers and needed new types of troops to deal with new situations. Among these were the original H.E.A.T. Viper figures. They were specialists who were able to crack fortified positions such as police headquarters or military outposts. However, I found their bright yellow color scheme a bit too over-the-top and did not like how it meshed with the figures who populated the unit. In the summer of 2001, though, my problem was finally solved. The H.E.A.T. Viper was finally replaced by a figure that utilized the majority of his mold and accessories, but was done in a much more useful color scheme: the Fast Blast Viper.

First off, let's face it, the name Fast Blast Viper just sucks. There's no getting around it and no amount of justification will ever make it work. I know there are a number of collectors out there who simply call them Blast Vipers and that works. Personally, I just refer to them as H.E.A.T. Vipers. They have had the original colors updated and made more useful for urban environments. That way, they are not a new unit in Cobra, just one whose uniforms have been modernized. To me, this makes the figure more useful and gives him greater roots to Cobra's long history.

The best part about this figure is the coloring. The FBV is a nice blend of dark black, subtle smoke grey and a bluish hued grey that create a nice, dark figure whose details are not lost in the opacity. I think that is one of the reasons why I like this figure so much. His color scheme is very different in that it is vibrant and alive. So many figures in the '00-'01 A Real American Hero Collection were very bland and dead to the eye. The FBV does not fall into this category, though, as the colors don't have the muted tones that are so common on his contemporaries.

His accessories, while nice, don't quite live up the the H.E.A.T. Viper's legacy. He lacks the peg on both his head and on the shoulder tab that were the plug-ins for the H.E.A.T. Viper's weapons. As such, you are left with a large missile launcher that has an attached hose with no place to plug it in. I have made up for this by simply attaching it the backpack, but it is not an ideal solution. Still, it works and still allows for a wide variety of uses for the figure. One thing of note, though, is that this figure includes 6 missiles that attach to his legs. At first glance, these would appear to be the type of thing that will be easily lost over time. However, as a little bonus to collectors, both versions of the 2002 Wave 1 Neo Viper include these 6 missiles. That little Easter Egg will ensure that there are plenty of these accessories to go around as we become farther and farther removed from this figure's release date.

The final piece of note on this figure's physical appearance is dually a criticism and praise. For an unknown reason, the original H.E.A.T. Viper's head was not reused on this figure. Instead, it was replaced with a black Undertow head. This sleek head is far more visually appealing than the oddly designed H.E.A.T. Viper's. However, this head is only covered by a thin mask. As such, you would think that the gear carried by an artillery trooper would pose a danger that would not be covered by so skimpy a head covering. It is a small point, but one that was cause of some initial criticism of the figure. I've just assumed the mask to be fire-proof and able to provide the type of protection these characters would need. (On that note, it is unknown if the FBV was amalgamated due to the loss of the original H.E.A.T. Viper's head [the mold was released in Brazil in the early '90's] or just a design update. The H.E.A.T. Viper's head has long been an oddity, so it may have been deliberately excluded in an effort to create a more visually appealing figure.)

In my collection, this figure has some different uses. First and foremost, he is the hand held artillery specialist who still supports the Urban Death Squads. Beyond simple fortification destruction, the FBV also takes on anti-aircraft responsibilities. I have him as the primary attacker of the low flying G.I. Joe gunships like the Dragonfly, Tomahawk or Night Attack Chopper. In addition to the field duties, I also use the FBV as Cobra's primary gunner. When I was younger, I always wished Cobra had a gunner figure. Someone who could operate the turrets of the H.I.S.S. Tank or the A.S.P. As I had a number of the figure, I used the Hooded Cobra Commander in this capacity. Eventually, though, I just wanted something more. The FBV fills this role well as he looks good in most Cobra weaponry and his true specialty is closely related enough for people to accept him in this role. For this reason, I like the figure on a couple of different levels and am able to better utilize him in more situations.

Fast Blast Vipers are still not that expensive to acquire. However, they are a little harder to find that the ubiquitous Laser Viper. This is mainly due to the fact that the FBV pack was pulled after its shipping allotment and was not carried forward to future figure waves like the Laser Viper was. As such, if you did not get this guy during his short window of availability, he is harder to find than many other of the A Real American Hero Collection figures. However, by 2001, the collecting community was already aware of the quick disappearing act as so many collectors had missed out on the Firefly/Undertow pack from 2000 and were watching it reach nearly $75 for a MOC specimen. As such, once news about the Wave IV case assortment leaked out, many dealers and collectors went out and bought up droves of FBV's in an attempt to take advantage of potential later shortages. However, these haven't really materialized as many Wave III cases with the FBV ended up at clearance and warehouse outlets. I know that the Meijer store in my area had an ample supply of FBV's at $4.99/pack through Christmas of 2001. As such, this figure has not become the highly sought after second hand market item that many had planned for and is still available for around $12-$15/pack from many online dealers. As such, if you missed out on this guy, you can still acquire him without too much time, trouble or expense. I have found this figure well worth his original retail price. Even at aftermarket pricing, I would get one of them now as he is worth it just to have. Army building, though, is a different story. I have 2 loose FBV's and have found that enough. I still have 3 carded figures that I haven't opened as I have not had a need for the figures, yet. When I do, I'll open them. However, as the FBV is the type of figure that lends himself to smaller numbers, I don't know when that will be. Still, he is a quality figure and one that is important to my Cobra army. Given a choice between this figure or the original H.E.A.T. Viper, I'd take the FBV every time. I think that many collectors out there will agree with me.

While I'm well set on V1 Fast Blast Vipers, I do not have a 2002 FBV that was available in the BJ's exclusive set. While I don't want one for the ridiculous amounts I've seen them sell for, I would be open to trades. If you have one and want to work out a deal, email me. 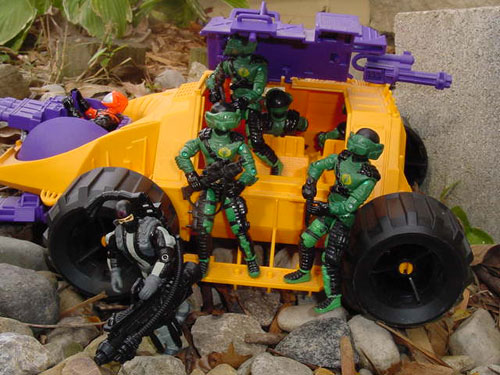 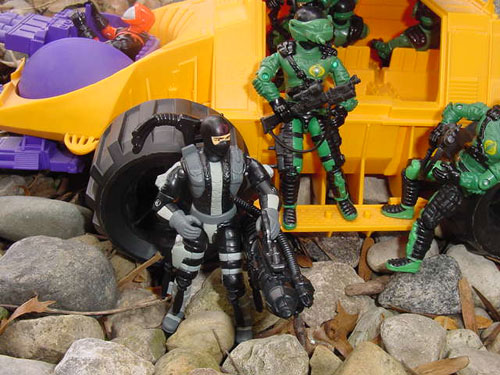 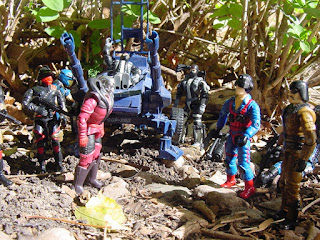 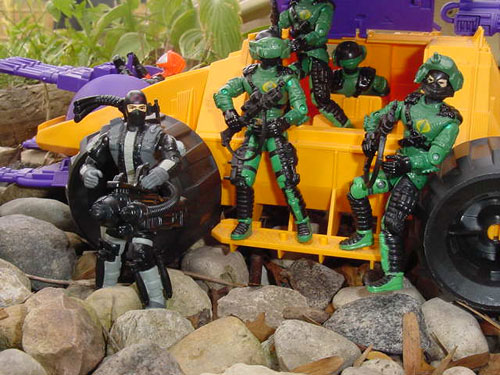 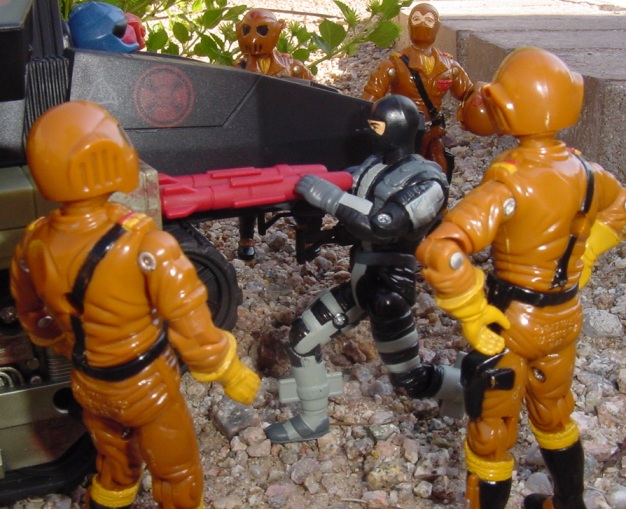 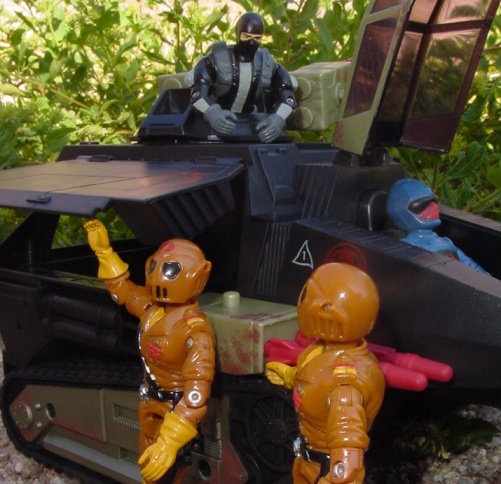 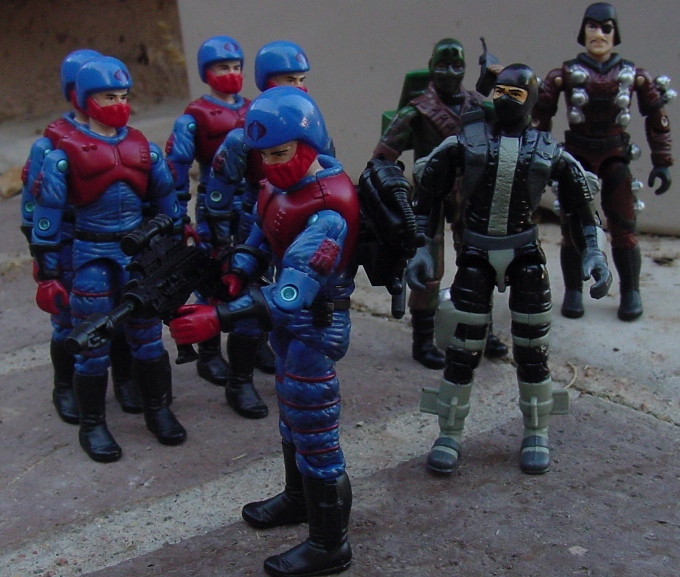 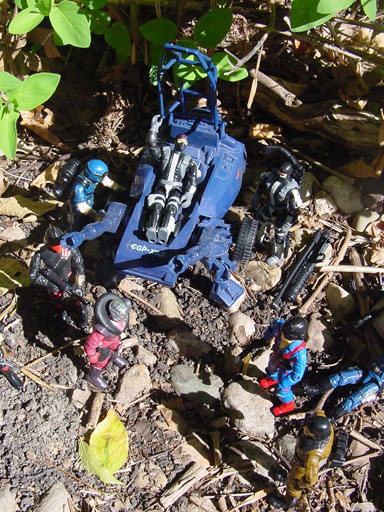 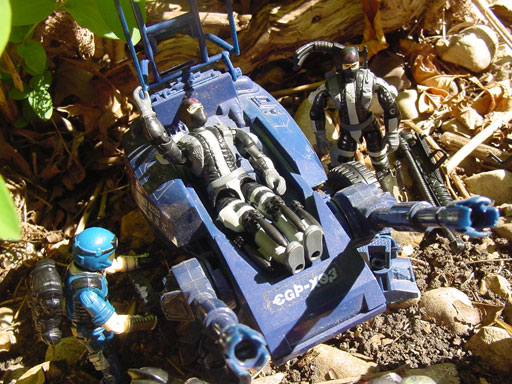