In 1988, I was basically done with Joes.  I had purchased just about every 1987 figure and had enjoyed them through the first part of the year.  But, in the fall of 1987, I entered 8th Grade and Joes became a thing of the past for me.  As 1987 wound down, I moved out of my old room that was filled with my toys and into a new, larger, more private space.  My Joes did not make the move with me.  Even as my interest in Joes diminished, I found that old habits died hard.  As such, in very early 1988, I purchased the last of my youthful Joe toys: Hardball, Tiger Force Roadblock and Hit and Run.  Each had something specific about him that compelled the purchase.  Hardball was a baseball player and I was hooked on baseball at the time.  Roadblock was an update to a childhood favorite and a great way to finally get an unbroken gun in my collection.  Hit and Run, though had everything I looked for in a figure: great militaristic colors, amazing accessories and a solid mold.  There was no way I could not buy him.  As such, Hit and Run became one of the final 3 G.I. Joe figures I purchased in what I would call the "childhood" phase of my collecting life.

Hit and Run had a short life in my collection.  I had only owned him a few weeks before he went on a trip to Dayton, Ohio with me.  There, in my grandparents' backyard, Hit and Run disappeared on me.  My grandparents had a great backyard for playing with action figures.  It had 2 limestone walls that were covered in ivy with gardens above and below them.  It was a perfect place for hiding Joes...especially those with ropes who could scale the walls.  Hit and Run was perfect for this.  I had him climbing the walls, hidden in the ivy, to sneak up on Cobra.  However, when I went inside, the figure was so well blended with the green ivy that I didn't see him.  As such, Hit and Run hung on that wall, hidden in ivy, until the fall of that year.  I then retrieved him.  But, by then, I was in high school.  So, Hit and Run went into a box and stayed there for years.

As an adult collector, though, Hit and Run became a favorite, again.  The mold and coloring were just too good to overlook.  Even though I had a well conditioned, complete Hit and Run from childhood, I found myself acquiring multiple, additional Hit and Run figures in my early days of adult Joe collecting.  I had him posed on the Whale, in the HQ and among other, similarly cool figures.  He fits well with figures from all years of the line.  While I have long stated that green figures are boring, that statement applies only when the basic military colors are overused.  When every figure looks the same, the line suffers.  As the vintage joe line was very diverse in terms of colors and designs, figures like Hit and Run stand out.  At his core, the figure is green and black.  That's it.  There are some subtle differences in the greens and the whites of his eyes are painted.  But, the basic figure is a solid core color with a single paint mask over it.  In the modern line, this would reek of laziness.  But, in the vintage line where he was surrounded by a diverse contemporary force, Hit and Run's simplicity makes him stand out.

The standard colors work so well together and were seen so seldom in the '80's that the figures who do use them became iconic.  Plus, Hit and Run's accessories are an extension of his character.  The hallmark of the vintage line was that figure and accessories were perfectly paired to create a character.  You can see this with Hit and Run.  Hit and Run's accessories were just about perfect.  He featured the light machine gun that was aesthetically pleasing, but also practical for his specialty.  Instead of a backpack, Hit and Run included a duffel bag with a working knife holster on the side.  This fit around his torso and had a rope wound inside it.  The rope slotted through the end of the bad and was attached to a grappling hook.  This feature was a substantial improvement over the accessories originally included with Alpine.  Hit and Run's waist also has a molded tab through which the rope could be threaded so that Hit and Run could use the rope in a real rappelling type motion.  It was that type of little detail that helped take something that could have been boring and turned it into one of the best figures in the line's history.

The Hit and Run mold had a short life.  It was used for the US figure and then repainted as the European exclusive Tiger Force Hit and Run.  After that, the mold went down to Brazil where most of it was used by Estrela to make Alpinista.  (Which is very similar to the American figure in terms of coloring.)  Both the Euro and Brazilian figures have the distinction of featuring Hit and Run's face in flesh tone rather than green paint.  It is a different look for the figure and gives collectors an alternative for the Hit and Run character.  Hit and Run's arms were ultimately used for various Duke variants that were available in certain parts of the world.  The mold seems to have died in Brazil and collectors were never treated to a modern remake of this character.

Hit and Run's can be surprisingly expensive.  Mint, loose and complete, the figure can go as his as $20.  With a little patience, though, they can be had for $15 or so without too much trouble.  (Watch the elbows of the figure, though, as they are very prone to discoloration.)  An exclusive Hit and Run was released to Target stores in the early 1990's.  This figure was identical to the retail figure, but included a parachute pack.  (This pack was available for years as a mail away.)  The real differentiator is the yellow file card.  Collectors will pay upwards of $20 for the Target filecard.  So, that can raise the price of a loose figure.  For me, Hit and Run remains one of the best figures released in the vintage line.  He is a perfect blend of colors, mold and accessories.  So, he's worth adding to a collection for about any price. 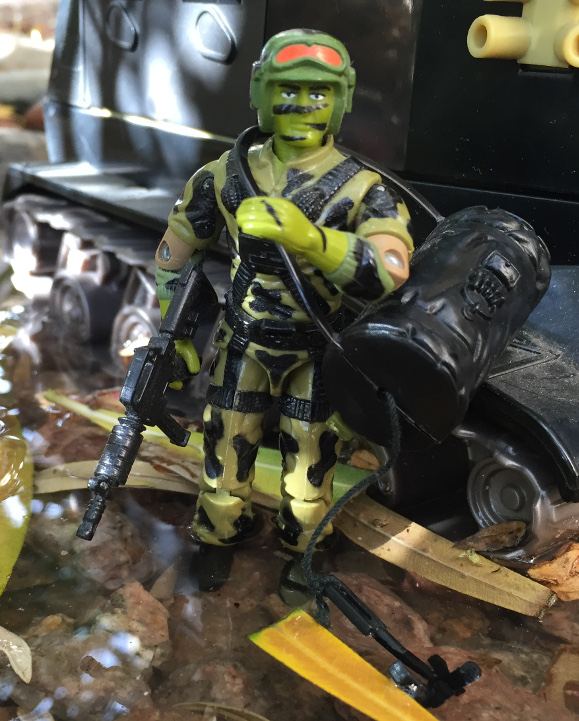 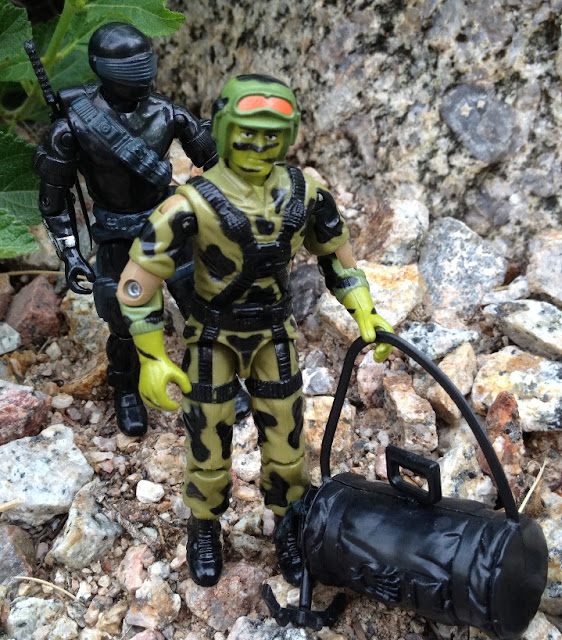 Posted by Robot_Sonic at 10:01 AM
Email ThisBlogThis!Share to TwitterShare to FacebookShare to Pinterest
Labels: 1988, Hit and Run