Recently, I was asked to rank the original 13 Joe figures in relation to each other.  One figure had to be best and one had to be the worst.  There were a string of criteria including accessories, mold, paint applications, etc.  I had to look through each figure as if it were 1982 and none of the future Joe figures were known to me.  The results were somewhat surprising to me.  In the end, it was Flash who had the highest score.  He had great, original accessories, intricate paint details that were vibrant, and a sculpt that was shared only with his clone, Grand Slam.  I had always liked Flash (Really, who doesn't?!?) but was amazed that he scored so highly against the rest of his rookie G.I. Joe class.  But, as I look at the figure again, it is obvious that this is a design of amazing quality and a figure well worth a lofty place in the line's history.

As a kid in 1982, Flash was one of the Joes that everyone wanted the most.  His specialty and look lent himself to popularity among kids who were largely playing with Star Wars figures at the time.  The animation in the commercials at the time showed the rifle cutting through steel doors like butter.  It was a great image and one that made Flash much more dangerous than any real world laser weapon of the time.  But, for some reason, Flash was one of the few original Joe figures who eluded me.  We had nearly every figure in our collection by the end of 1982, but Flash and Steeler were both missing.  (We had 3 Snake Eyes figures between the 3 boys, but no Flash!)  As such, Flash was only part of my Joe world when I visited friends who had one.

Around 1986, though, a high quality Flash figure came into my collection.  I don't recall where it came from, but it showed up one day with just the helmet and visor.  It likely belonged to one of the kids in our neighborhood who left it at our house and never remembered to come retrieve it.  But, that addition sparked a new use for the figure.  I gave Flash the rifle from a spare Snow Job figure and made him the first of the Joe army builders in my collection.  Soon, Silver Pads Grand Slam joined him as a nameless, army building pilot who helmed the Sky Hawk.  In this capacity, Flash flourished.  His red pads were body armor that protected him against the Vipers of the day.  He could die over and over again, or save the day.  It was a perfect fit for a high quality mold.

Flash's hallmark are his accessories.  His highly detailed laser rifle plugs into his equally designed backpack.  (Though, in an anomaly, Flash's artwork always showed the rifle plugging into a tube on the pack rather than the pack itself.  It is a small detailed difference between the art and the figure.)  This accessory combination simply could not be separated.  Flash had to have the rifle and pack in order to be useful.  Add to this his visor, and really, Flash wasn't nearly the same figure missing even one of his accessories as if he had them all.  But, that was the model of the time.  Joes all featured weapons that were as distinct as their uniforms and code-names.  It added a level of depth to each character.  It also, at least to me, really allowed Joe to stand apart from the knock off military lines that proliferated in the years after Joe.  None could capture the combo of unique weapons, mold and paint like Joe and it really made them appear even more cheap than they were.)

The Flash mold was incredibly popular the world over.  After it's release in the US for both Flash and Grand Slam, it went to South American where exclusive Flash figures were produced by Plastirama, Auriken and Estrela in Argentina, Mexico and Brazil respectively.  In Brazil, the mold was also used for the exclusive Cobra De Aco figure.  Flash was also slated for release in the Europe as part of the Action Force line.  A sample of this figure actually exists in the collecting community.  But, the figure was never actually released and a loose version is one of the rarest figures in the line.  Hasbro wanted to bring the mold back in 1997 in the Stars and Stripes set, but the mold was lost.  As such, collectors were never treated to remade Flash figures during the resurgence of Joe that began in 1997.  He remains one of the re-paint line's greatest omissions.  Hasbro could easily have milked many repaints from the mold for Flash, Grand Slam and Cobra De Aco.  Considering that Hasbro remade molds for Lady Jaye, Cobra Trooper, Mutt and others that they only used once, skipping Flash just doesn't compute.  But, it does leave this original figure as a lone wolf among Joe's original 13 members.

Flash figures can be pricey.  Mint and complete versions can go as high as $22 - $25 each.  But, you can also get them in the $15 range with a little patience.  For that price and considering that this figure is 30 years old, Flash is a pretty good buy.  He works with figures from other years, has a distinct look and is a character that hasn't been done to death.  As such, I wouldn't consider any collection complete without one.  I consider Flash to be an essential figure, even if the notion of a steel cutting laser mounted to his back is still a bit far fetched.  But, that willing suspension of disbelief is what made Joe so popular during its heyday and is a strong reason as to why collectors still flock to the line today. 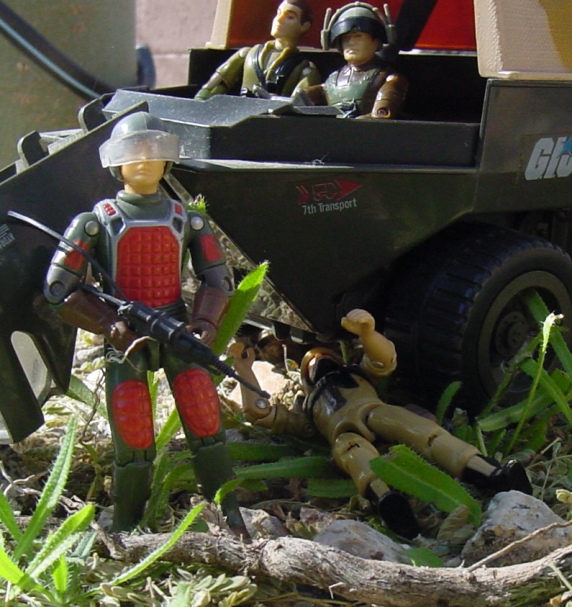 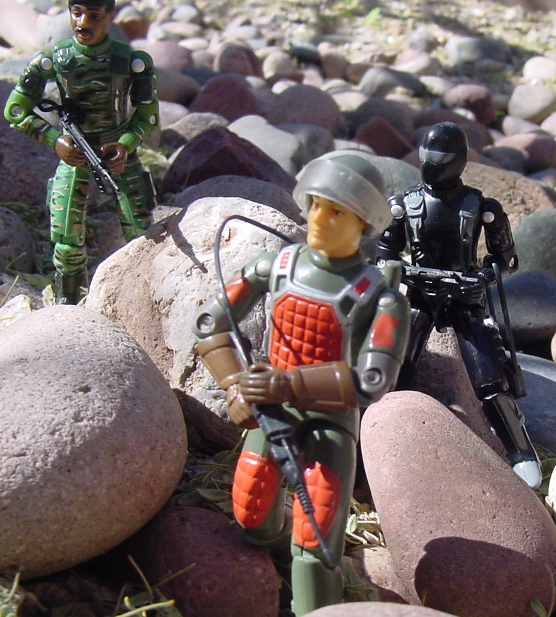 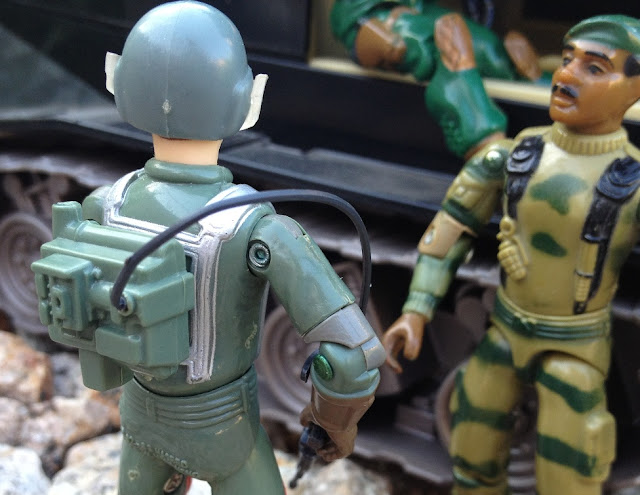 Posted by Robot_Sonic at 2:31 PM
Email ThisBlogThis!Share to TwitterShare to FacebookShare to Pinterest
Labels: 1982, 1983, Flash, Original 13