Retail catalogs sold a lot of product in the 1980's.  Christmas was an especially lucrative time as the catalogs were widely distributed and a staple of gift giving.  To capitalize on this phenomenon, Hasbro teamed up with large retailers to offer G.I. Joe figures.  Vehicles were perfectly designed for the catalog model.  Figures, though, were problematic since they had large packaging and weren't priced for individual sale through a catalog.  So, Hasbro bagged up sets of figures and offered them as exclusive offerings through the catalog retailers.  One such set was the 1984 JC Penney's "Bad Guy" 6 figure bundle. 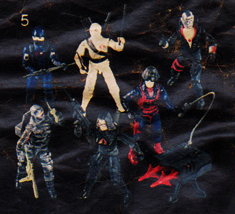 This figure set included the four new Cobra characters introduced as single carded figures in 1984 as well as Destro and the classic Cobra Soldier.  The set was sold for $17.99.  This was only a slight premium over retail price.  The figures did not include full cardbacks.  They were, instead, bagged up with their full complement of accessories and a filecard.  As with most red backed filecards, the bio cards have become highly desirable and sought after by collectors.

In the fall of 1984, Stormshadow was still hard to find.  My brother had been fortunate enough to get one for his birthday in October.  I would get one for my birthday in December, too.  But, my friend with whom I most frequently played with Joes was not so lucky.  He could not find the figure.  So, his mother ordered him this 6 figure set, even though he had all the other figures in the set already.  Even though she bought it for him for Christmas, she let him open all the figures early so he could have a Stormshadow to play with.  I remember noticing the filecards were different.  But, since the figures were the same, didn't much care after that.

Years later, I realized how rare these items probably were: at least when compared to standard, carded Joes.  The six figures in this set have the draw of being Cobra and being pretty much all the Cobra bigwigs of that era.  Below you will see pics of the figures, except for Baroness.  I have yet to come across one of her. 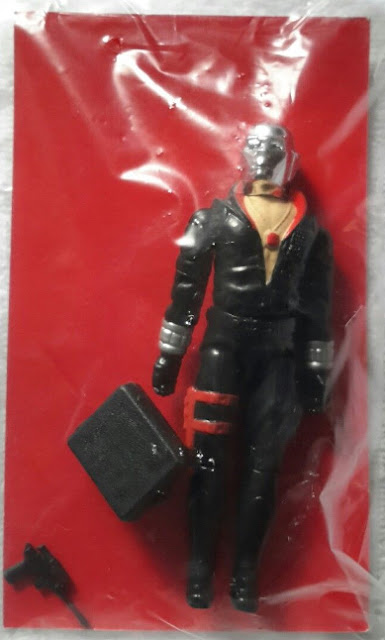 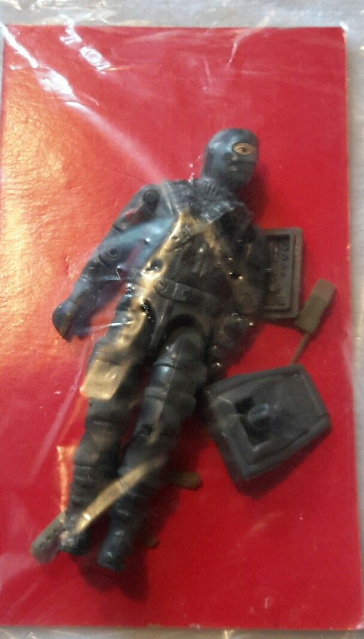 Stormshadow was probably the reason why so many kids actually got this set.  He was hard to find and a sure thing was probably enticing for many kids.  You'll note the figure is extremely discolored, even though it was never removed from the bag.  This shows that the white plastic used on the Stormshadow can get damaged even if it's never been touched by human hands.  Heat, sunlight and drastic temperature changes can all affect Stormshadows and yellow them, even if they are still carded or bagged. 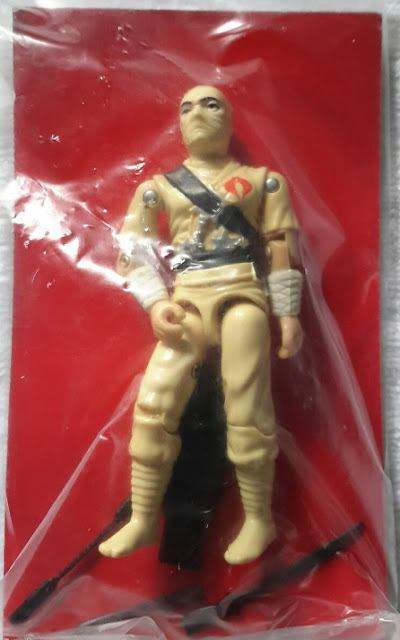 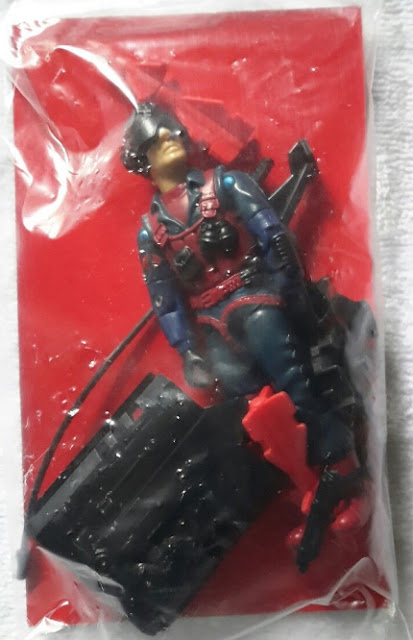 You'll note that the Cobra Trooper's filecard has the original text and not the text from the 1982 JC Penney mail away set. 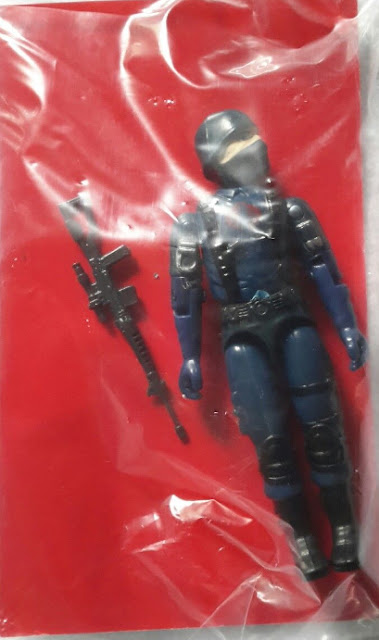 Each figure included a red back filecard that had a flag point printed in the cut away area. 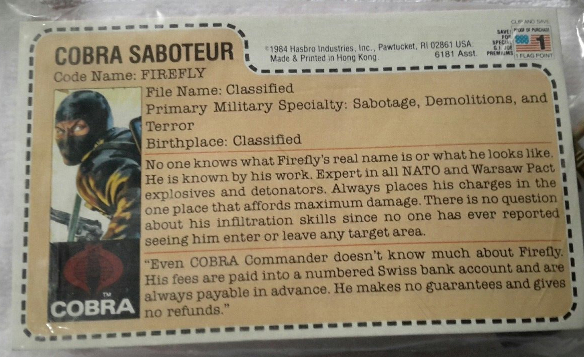 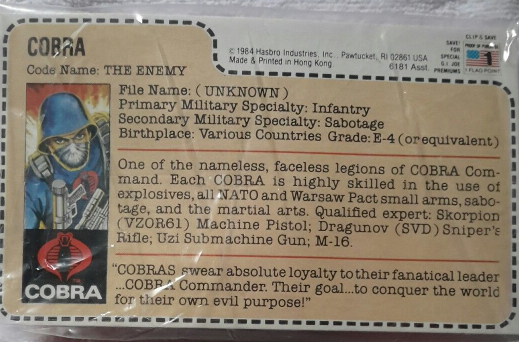 Here is the box in which the set was shipped:

Of course, these figures are extremely hard to find.  Uncut filecards will command a substantial premium.  Still bagged figures will fetch a couple of hundred dollars each, depending upon the character.  The figures are no different than retail releases.  But, proof that the figure originated from this set will attract great interest and substantial prices.
Posted by Robot_Sonic at 1:46 AM
Email ThisBlogThis!Share to TwitterShare to FacebookShare to Pinterest
Labels: 1983, 1984, Cardbacks, Cobra Trooper, Destro, Firefly, Mail Away, Rarities, Retailer Exclusive, Scrap Iron, Stormshadow