There are a large number of vintage molds that were poorly colored the first time around and were never repainted in a collector friendly manner.  These were less common in the early years of the line.  But, as the calendar turned to the '90's, this became more and more common.  Modern collectors have clamored for many of these molds to be repainted in colors that were more realistic. During the repaint era, Hasbro did revisit many of these molds and offered collectors some high quality repaints of great molds that were poorly colored the first time around. However, there are still many gaps. One of the most glaring is the Tracker figure. With a solid mold and SEAL specialty, Tracker has all the makings of a great figure. But, his red and yellow base really makes it hard for collectors to warm to this figure like they should.

The Joe line is not really lacking for SEALs. Torpedo and Wet-Suit were the de facto naval representatives in the early days. (Ultimately, Shipwreck joined them in 1994.) The issue with these figures, though, was that they were all in dive suits. While excellent representations of divers, this left the Joe team with no version of a SEAL who had a land based uniform. Wet Suit had a great run in the comic outfitted in land cammo. So, having a SEAL that could be used on land was something the line was crying for. Unfortunately, Tracker was the first SEAL to be offered in a uniform that was not a diver. The sculpt and design were on par for such an important role. But, Tracker's colors were not. The maroon and yellow base hues really don't work with anything. They are bright and render Tracker difficult to use even in vehicles. It is an unfortunate fate for a mold of this quality with such a desired specialty.

Tracker's mold is well done. Outfitted in a form fitting shirt and pants, Tracker has the tools to work on land, but still has a look that allows him to be used in water, too. Across his chest is a harness with a sculpted pistol and grenades. He's got a nicely detailed knife on his legs and the drawstring on his pants is a great little, under appreciated detail. Tracker even features gauntlets around his shins for protection from things like stingrays, sharp corral or enemy traps. The oddity is Tracker's boots. They are large and oddly shaped. It is likely they were meant to be something he could wear underwater. That would account for their moon boots appearance but not the purple details that are painted onto them. Still, the overall ensemble is on par with other, better colored figures from the time period.

Tracker's accessories are very well sculpted.  He includes an MP-5 inspired weapon that became very common in 1993 and 1994.  He also included an inflatable rubber raft, oars and a visor.  The raft is the highlight as it can be blown up to float.  This allows it to be deflated and easily transported vs. the solid plastic rafts that came with the 1994 Action Series figures. The problem with all this gear, though, is that it is orange. The gun is orange, the oars are orange and the raft has an orange top. Not exactly the colors a SEAL would choose for his land based operations. (Fortunately, the visor is black.) This poor color choice renders excellent accessories irrelevant. Sure, they match the figure. But, adding more orange just means you can't even use these weapons with other figures. Fortunately, Tracker's gun was available in black with many other figures.

In my collection, Tracker has never really found a role. The mold is good enough and the accessories are certainly eye catching. But, the poor colors make him difficult to even display. Among his 1991 contemporaries, Tracker stands out...badly. Tracker is both a character and a figure who has great potential. When I first acquired one, it was the unrealized usefulness of the figure that stood out. I have forgiven many brightly colored figures, but could not do so with Tracker. For concepts that bordered (or were outright) science fiction, bright, neon colors could be acceptable. Tracker, though, is a SEAL. His missions would dictate subtetly in coloring to not attract attention to himself. A garish yellow pair of pants pretty much defines the anti-thesis of a SEAL's purpose. That has always made it harder for me to forgive the Tracker coloring than it does on a figure like Sci Fi.

The Tracker mold has a short history.  It was released in the U.S. only in 1991, but did see a short production run for release in China.  After it's releases by Hasbro, Tracker appeared on cardbacks in Brazil.  However, the mold was never actually released there.  Around 2000 or so, the mold turned up in India.  Here, Tracker was released in colors very similar to those of the American version, but with a new raft.  In 2003, Hasbro re-acquired the mold from Funskool.  They quickly showcased a Night Force Tracker at the 2003 G.I. Joe convention.  Early samples of the Night Force Tracker showed up in Asia and became available to American collectors.  But, the figure was changed from Night Force Tracker to Action Man at the last minute.  Action Man was included with the Night Force set in his trademark bright orange.  After that, Hasbro never returned to the Tracker mold and collectors never saw a decently colored version of the mold offered in any official, production release.

Tracker figures can be difficult to find if you want them complete.  The raft tends to pop and the visor is notoriously small and hard to come by.  Still, though, mint and complete figures rarely break $11 or so.  The poor colors just doom the figure to obscurity and cheap aftermarket prices.  It's nice as you can add Tracker to your collection for cheap prices.  But, you are still left with a figure that is difficult to use and doesn't really add anything other than bright colors to a SEAL team. At his core, Tracker is a glaring example of potential unfulfilled. He is a great mold that could have been recolored into something collectors really appreciated. But, since that never happened, collectors are left with a bright reminder that Hasbro made poor choices even in the vintage line. 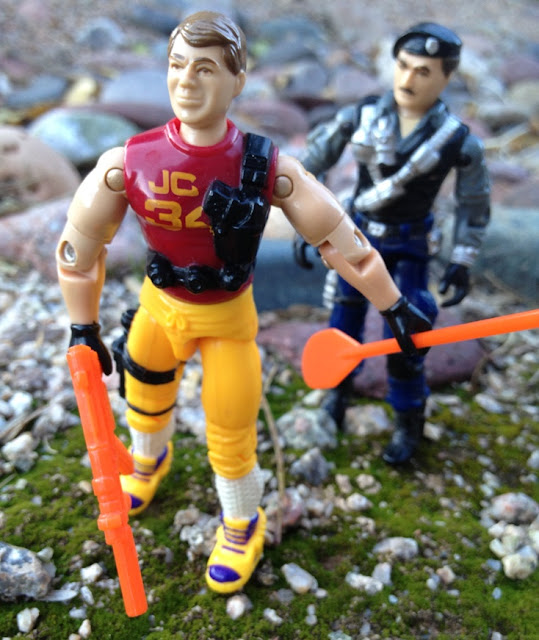 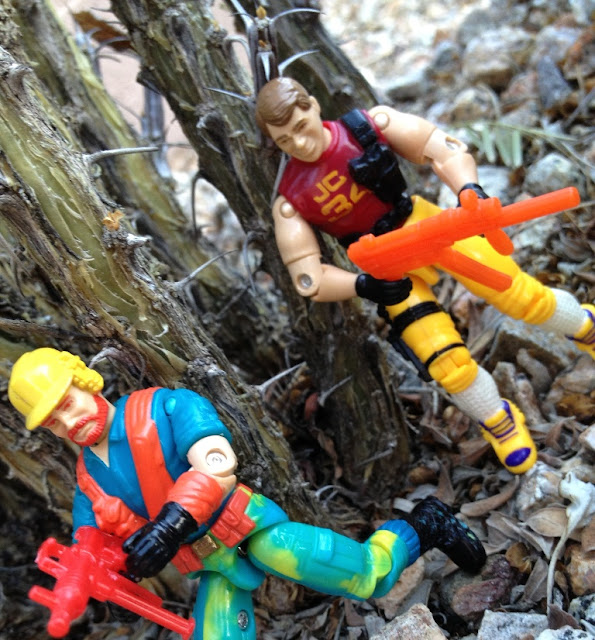 Posted by Robot_Sonic at 10:46 AM
Email ThisBlogThis!Share to TwitterShare to FacebookShare to Pinterest
Labels: 1991, Tracker