In late 2000, Funskool figures were not overly common in the U.S.  You'd see them online from time to time.  The typical prices, though, were in the $15 range.  At the time, that was a ridiculous sum when you consider you could buy loose, mint and complete with cardback Satan's and Ninja-Ku's for that price.  At that time, I found a dealer in Malaysia who was selling several 1993 and 1994 American figures that I needed for very reasonable prices.  His shipping was expensive, but didn't add too much to the cost of the figures if you bought a lot of items.  In perusing his offerings, I found a Funskool section for the minuscule price of $8 each.  I decided to take the plunge and bought several figures.  Among them was my first Funskool Barbecue.

The Barbecue mold is a classic from 1985. It features tremendous sculpting on the body as well as awesome accessories designed to implement perfectly with the figure mold. The figure's foam gun attaches to Barbeque's leg so he doesn't have to hold it all the time. The same features exist on the Funskool figure and make him a perfect homage to the classic Barbecue. This Funskool variant has bright yellow and blue highlights. The body is not the subdued orange of the American figure and is much brighter. It's definitely a gaudy Barbecue variant, but that's what makes the figure fun.

Funskool figures have an innocence around them. They were not created for any collector market. These figures were designed to be sold to the millions of Indian children of the time. As such, the bright colors are designed to catch their eyes. As such, American collectors get an insight into the marketing of a foreign action figure line but also get the opportunity to acquire some figures that were designed more closely in line with the vintage figures than the repaints Hasbro was releasing during the same time period.

This is the reason why I enjoy Funskool figures so much. They are bizarre and obscure. But, they bring something that was missing from the modern era American Joes. Sure, the Funskool quality can be spotty. But, Barbecue figures tend to be a bit better than some other characters. Regardless, Funskool opens up a tremendous new world for American collectors. Aside from the super rare figures, these more common modern figures bring collectors some great new characters as well as some great updates to classic American molds. Figures like Barbecue are odd, but the bright colors are an interesting way to expand the Barbecue character and use him in more varied displays.

There are several variants to the Funskool Barbecue figure: mostly regarding the mask color.  Some figures have a bright yellow mask while others are slightly pinkish. Being Funskool, there are likely dozens of slight color variants. So, modern collectors have many different options if you want to track down Funskool Barbecues. The differences are extremely subtle, but they are there.

The Barbecue mold was quite a world traveler. After it was released in the U.S. in 1985 and 1986, it was sent to Brazil. There, Estrela released the figure in colors very similar to the American version. In 1989, Estrela produced the Slaughter's Marauders Barbecue for both the U.S. and Brazil. After that, the mold went to India for Funskool's long production run. Barbecue may have been returned to Hasbro in the early 2000's or he may not have. Regardless, the mold has not appeared since the Funskool release. The mold probably still has some potential for more repaints. (Especially as a Cobra!) But, that is unlikely to ever happen.

Funskool Barbecue figures are fairly common.  Thousands of them were imported to the U.S. between 2001 and 2004 and sold for around $4 each.  Today, carded versions don't cost much more than that.  The Funskool demand was sated and most of the figures remain cheap today.  So, the modern collector really has no reason to not acquire this figure.  For fans of the classic Joes, figures like this Barbecue are a great way to augment a collection and have some variety to classic characters. Sure, the colors are bright, but the figure still retains a solid camp value due to its foreign origins. For under $10, that's worth acquiring the figure. 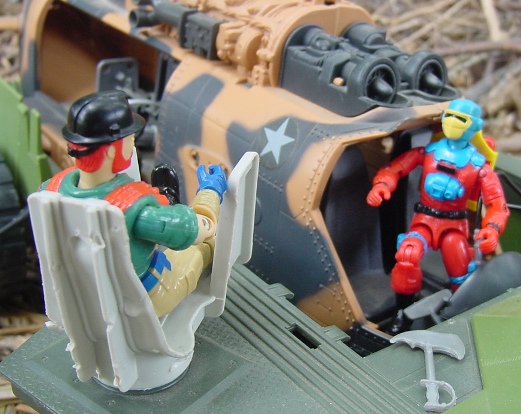