Years ago, I briefly profiled the Dino Hunter Low Light figure.  Really, that review was posted as a novelty to showcase a rare figure that was heavily a product of its time.  That Low Light had a set-mate, though, that was also included with the playset: Ambush.  Ambush is a bit more low profile than Low Light in terms of characterization and collector popularity.  But, the figure released with the Dino Hunters set is almost excellent.  There is one glaring flaw, though, that is the same one that afflicted Low Light: a glaring use of bright, neon paint.  That alone renders the figure nearly useless and something most collectors will only seek for completion.

If you look at this figure, the base colors are very strong.  An olive green shirt with black sleeves and tan pants all add up to a pretty good start.  The tan helmet and dark green weapons are nice complements to the figure.  Most of the details, though, are left relatively unpainted as was the Hasbro norm at the time.  The real issue, though, is the neon orange bandoleers, grenades and belt.  The orange is just too much of a contrast with the rest of the figure.  As such, that's really the only impression that's left: the figure is bright.  Even though the reality of the figure is a solid base, the offending neon negates it and renders the figure largely useless.

The existence of the Dino Hunters set is really just a testament to how popular Jurassic Park had become in 1993.  At the time of the movies release, I was in the UK, France and Spain.  By the time I returned to the United States, the fad had largely passed by.  But, the cultural mark of the franchise had been felt across multiple platforms and Joe was no exception.  The set was hastily thrown together as a Toys R Us exclusive with Low-Light, Ambush, a cheap, plastic dinosaur and a repained Desert Fox that featured a retooled gun that would shoot a net to catch the dinosaur.  Done in better colors, the jeep and figures might have been a fun addition to the Joe line.  Who wouldn't want a net that would shoot out and catch Cobras?  But, the late release date, cheesy concept and poor colors really doomed the set to obscurity.

This figure really has no role in my collection. Occasionally, I pop him into the HQ as a new take on Ambush. But, that's fairly rare since his colors really clash with the classics from the '80s. The orange does give the figure some visual panache. It doesn't make him useable, but the figure does stand out in a display. However, I can't really find any other niche that fits this Ambush figure. He's a rarity and an oddity that will catch someone's eye when they peruse a collection. But trying to use him can be tough.

The Ambush mold has had a good life.  After it's use in 1990 and 1993, Hasbro dusted it off and produced the quality Sidetrack figure in 2001.  From there, the mold went over to India where the head was used on the amazing Funskool Big Brawler.  After that, the mold was returned to Hasbro where parts of it were used for various ARAH style figure releases until the line's demise.  It would have been nice to see Ambush repainted into maybe and Arctic theme or in a woodsy cammo pattern.  But, the original figure and Sidetrack are pretty good figures that leave the mold's legacy intact.

Dino Hunters figures are hard to find and expensive.  While not the $50 figures they were a few years ago, mint and complete versions still run in the $30 range.  That's a lot to pay for a neon rendition of a mold that is readily available with better accessories and much better colors for less than 1/3 the price.  But, as a novelty, the figure has some merit.  The neon is very '90's and the Dinosaur aspect is so 1993 specific that the figure retains some camp value.  The figure does have decent base colors, though, and can be forgiven more easily than many other 1993 repaints.  If not for the completist aspect, I would not have this figure.  But, it's still something different that will catch someone's eye since you don't see him all that often.  So, there is additional value in the figure for that reason alone. 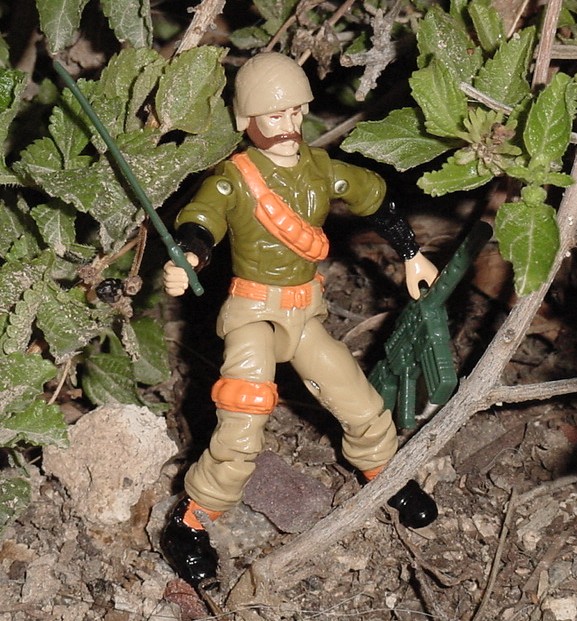