To say that the Alley Viper was overdone in the repaint era would be an understatement. In 7 years, the figure was released in 5 unique color schemes. Each of these were designed with collectors in mind and each was army built with some gusto by the collecting world. In 2004, though, Hasbro put out their last Alley Viper incarnation. By that time, collectors had feasted on three retail Alley Viper figures in the prior two years. And, as such, were somewhat burned out on the mold. This lead many collectors to overlook what might be the best Alley Viper repaint of them all: the 2004 Urban Strike Alley Viper.

On paper, the Urban Strike Set looked like a winner. 3 major Cobra characters combined with three army builders should have been strong. The actual release lived up to the hype. Done in shades of black and blue with a bit of grey thrown in, the set was classic Cobra colors with strong molds. The Alley Viper, though, was fairly plain. But, there are times when less is more and this all black body with a few silver details and brown highlights was a perfect swan song for the mold. It was a simple and effective look for a character whose primary duty would be urban combat, likely under the cover of darkness. Despite Cobra's affiliation with evil, they rarely featured figures that were clad in solid black. (The repaint line featured more and more of them, but it was still relatively rare to see.) So, those who do appear in that color can be very useful, especially when paired with the large volume of black Cobra vehicles that are available.

The Urban Strike set suffered from it's release window. In late 2003, Hasbro had created the Python Patrol set. This set included 5 vintage army builder molds, all with their original accessories, colored in a decent homage to the Python Patrol theme. In January of 2004, the Cobra Infantry Squad was released. This set of 4 Cobra Troopers and 2 Cobra Officers was the high point for army builders. It was an immensely popular set that sold through very quickly. When the Urban Strike set appeared, collectors were hoping for a repeat of 6 army builders for their Cobra forces. But, Hasbro disappointed them by including only three army builders in the set along with Firefly, Scrap Iron and Stormshadow. This disappointment caused many to overlook the set and not realize that the Firefly was the best Firefly released up to that point, Scrap Iron had not been seen in 20 years and the Stormshadow was decently colored, even if the mold was lackluster. It was in the army builders, though, that Hasbro really outdid themselves. The Nullifer was nothing short of amazing. The Night Creeper was the best use that mold ever saw. And, the final figure, the Alley Viper, was one of the great, unheralded army builders in the repaint era.

Like most TRU sets of the time, the Urban Strike set had an unreleased variant that was available from Asia. While Firefly, Scrap Iron, Stormshadow and the Night Creeper all had fairly obvious differences, those on the Nullifer and Alley Viper are minor. Really, the only difference is some red paint cammo patterns applied to the figure. It is not a major variant, but one that is worth tracking as a squad leader for a group of retail released Alley Viper.

Today, these Alley Vipers are the main unit that's left outside of the 1997 Alley Viper contingent. The black color makes them one of Cobra's most effective quick strike units. The fact that they included the shield, face mask and pack helps flesh this out. (While the Alley Viper's weapon in the set sucks, the Stormshadow figure includes an all black uzi from the 1989 Snake Eyes mold that works perfectly with this figure. (You can see it in the photos below.) The figures are fully armed and ready for battle. While they are not perfect matches for the Rage, they work well enough and are right at home on Hiss Tanks or Stingers. It's a versatile figure that meshes well with vintage Joes and shows that sometimes, a simple repaint can be incredibly effective.

These Alley Vipers can fluctuate in price. In recent years, they have gone as high as $12 per figure to as low as $4 per figure. These days, you can get them in the $6 to $7 range, and less if you are willing to buy lots that include this figure and others. Many of the TRU exclusive set, including the Urban Strike, have taken on a bit of aftermarket appreciation. But, considering it's been a decade since this figure's release, that's not unexpected. Especially when you consider that this set likely only had around 20,000 units produced. Collectors have realized that sets like the Urban Strike did have some very redeeming qualities and are now willing to pay a bit more to add them to their collection. If you passed by this set at retail, that can be a bitter pill to swallow. But, the figures in it are top notch and this Alley Viper is certainly no exception. 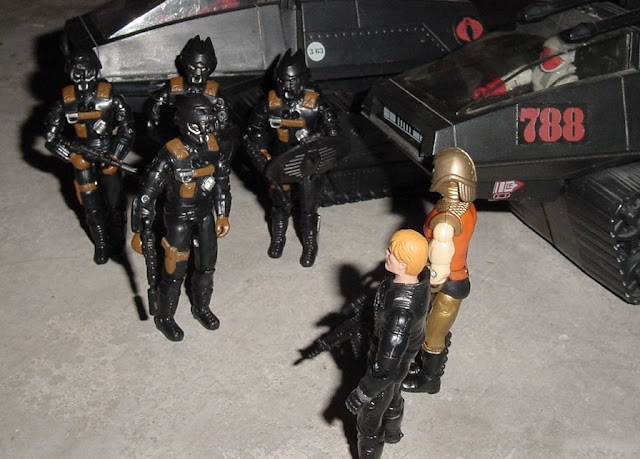