It is rare for a G.I. Joe figure to be done just about perfectly the first time around, yet still have so much potential that the lack of repaints make the mold a stalwart of unfulfilled releases. Such is the case with Hit and Run. The American figure is basically perfect. He has great colors that are true to the line's military roots. he has tremendous accessories that accentuate his specialty. And, he is versatile enough to be used in a variety of settings. Despite all that, though, most collectors would rank Hit and Run high on their lists of figures they wanted to see repainted during the 2000's. But, that never occurred. The likely reason for this is the Brazilian version of Hit and Run: Alpinista.

At his core, Alpinista is, basically, Hit and Run. The general theme of the figure is the same with the standard green cammo. But, the reality of the detail is that the two figures are quite different. Alpinista uses a darker base green. You would not think this would make so much of a difference. But, it completely changes the appearance of the figure...for the better. The darker colors are more muted and realistic than the brighter green of the American figure. The main difference, though, is that Alpinista has flesh colored hands and face. The face is most noticeable since the all green face has always been the hallmark of the American Hit and Run. The flesh face is a stark contrast to Hit and Run and makes Alpinista a deeper, more useful figure.

The Hit and Run mold got some use...just not in the U.S. After his release on a regular card and as a Target exclusive, the mold was sent to Europe. There, the impressive Tiger Force Hit and Run figure was released. It is an interesting repaint of the figure, but something that, were it not rare, would likely be unloved by collectors. Around 1993, the mold made its way to Brazil. There, Estrela released this Alpinista figure. After that, the trail runs cold. Alpinista's Brazilian contemporaries did not appear in India or during the repaint era. So, it's possible that the molds perished in Brazil. However, Hasbro did get some molds from later Estrela releases back. So, it's possible that the mold was available, but just not used. Either way, collectors never got a chance to see this figure in Night Force, Desert, Urban or Arctic colors. Any of those repaints would have been a great addition to the Hit and Run character's pantheon.

Time was that Alpinista figures were cheap and plentiful. For years during the early 2000's, carded versions could be purchased for under $20. As the decade wound down, though, these got harder and harder to find. Eventually, the supply pretty much dried up and Alpinstas became $50 carded figures. You can get them cheaper loose, but they are somewhat difficult to find as the few collectors who did open their cheap carded figures are the type who would hang onto their figures rather than sell them off. If you can find an Alpinista, though, he's a worthwhile pickup. Being cheaper than the European exclusive Hit and Run makes him more palatable as a purchase. And, the fact that this is a better variant of the mold makes it even more so. I've found this is a figure well worth having, whether you are a Hit and Run fan or not. 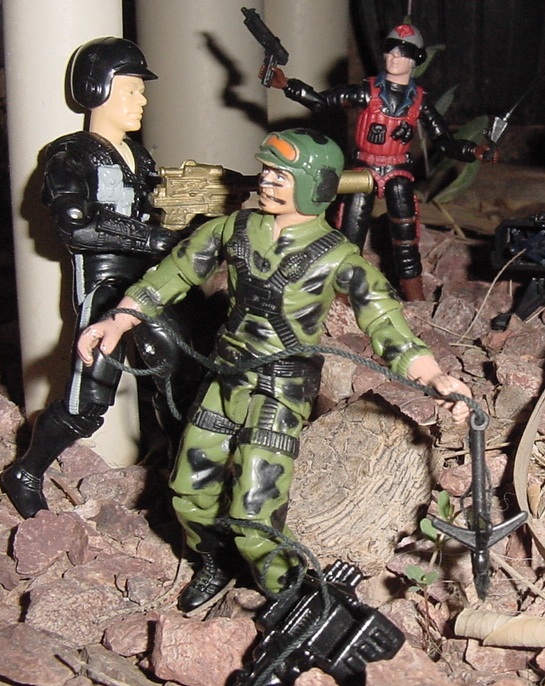