Among the early year Joes, there were plenty of Cobra villains. Major Bludd, Destro,Firefly, Stormshadow, Cobra Commander and the Baroness were all excellent evil characters who were equal foils to the Joes. In other countries, though, the Cobra villain roster was slightly expanded. In South America, there were three new Cobra characters: the Cobra Mortal, the Cobra Invasor and Cobra De-Aco. All three had one common ingredient which was the head from the 1982 Snake Eyes figure. In Europe, there was a completely different villain for the early days of Action Force. There, the Red Shadows with Baron Ironblood, the Black Major and an army of red clad troopers slowly were integrated into the European origin of Cobra. For the modern collector, these foreign figures offer some of the most expensive offerings to track down and purchase. But, the figures have limitations. The South American figures are all straight arms. The European figures are, mostly, 5 points of articulation figures that do not integrate with Joes. So, there are these great other villains out there that could expand the Cobra roster, but no quality figure representations of them.

Hasbro, for whatever reason, was loathe to release any of the concepts from these areas. But, in the late 2000's, factory produced customs of certain figures began to appear. After the intial deluge of Cobra Troopers, the Snake Eyes mold appeared. On the surface, why did collectors need more Snake Eyes figures? Hasbro had produced plenty. But, the Snake Eyes molds were quickly colored into classic Cobra colors and sold as Invasors. Shortly after this, chrome head versions appeared as Cobra Mortals. Quickly, more and more permutations appeared. Among them was a perfect hybrid of the South American and European villains: the Red Shadows Cobra Mortal.

I always like to expand the Cobra organization into more and more figures that fit with the style of the 1983 and 1984 figures. While those early years contained the bulk of the classic Cobra characters that permeate the line to this day, that is also their limitation. It's tough to play out other scenarios involving Destro, Major Bludd, Firefly and Zartan since their origins were well laid out in the comic. Having figures like this Red Shadows Cobra Mortal allows me to bring some other characters into the fray without disrupting too much of the established Joe canon. They fit with the bulk of my collection and build out the roster in ways that other foreign lines did not. While Invasor and Mortal were actual figures, they were straight arms. Most of the other pre 1985 molds that were exclusively released in other countries were Joes. Aside from Red Laser, Red Jackal, Satan and Ninja Ku, the exclusive figures from outside the U.S. who were released as swivel arm figures were Joes.

I see this figure as the Cobra Mortal's look when he operates within the European continent. My vision of the Joe world has always been that Destro was the centerpiece of Cobra's expansion into other countries. In the late 1970's and early 1980's, the world was full of splintered terrorist organizations. Some were well funded. Others were largely a facade. Slowly, though, Cobra was able to absorb most of them through its greater financial resources. Most of this, though was facilitated by Destro. Being a weapons supplier, Destro had access to the heads of most of the worldwide organizations. He would splinter these groups by funneling their most ruthless members to Cobra, where they would be better paid. Here, Cobra would turn these operatives against their former employers, eliminating the heads of the other organizations. Great operatives such as the Cobra Mortal would be employed by Cobra Commander to infiltrate organizations like the Red Shadows. There, the Mortal would actually do work for the Shadows. But, he was secretly learning about the Red Shadows and would give that information to Cobra Commander who would later use it to weaken the Red Shadows. In time, though, the Commander had no choice but to also eliminate the Mortal. Leaving him alive would have left too dangerous an individual in the wild for Cobra Commander.

This is a custom figure. It was not made with Hasbro molds, but was factory produced. The result is a high quality bootleg that integrates well with Joes, but is not a perfect match. The figure is slightly smaller than Hasbro Joes and can not wear real Joe backpacks nor fit onto vintage Joe figure pegs or stands. But, in general, the figure is decently constructed. The thumbs are a bit brittle, though. The Snake Eyes molds tended to be higher quality than many of the second wave of Cobra Troopers and Crimson Guards. There can be loose joints, but the figures are on par with many of the other quality issues that plagued both Funskool and Hasbro releases from the 2000's.

This figure is not easy to find. For a time, the various versions of the Cobra Mortal sold in the $30-$35 range, with some going as high as $50. After more and more got into the market, prices dropped into the $15 range for a few months. But, then, the supply dried up. Today, this is a $25-$30 figure. As an oddity that can be used to expand a Cobra army, that's a high price tag. But, when referenced against other Cobra Mortal figures (even the 2006 Master Collector fiasco) it's pretty cheap. I've found these bootlegs to be of more value than even the bootleg army builders. The characters are what drives Joe and having tons of repainted army builders starts to diminish the value of the entire mold as it gets overused. That is less so with characters that have no prior releases. So, I find these figures to be the type of thing that makes a collection even better. For that, they are worth the price. 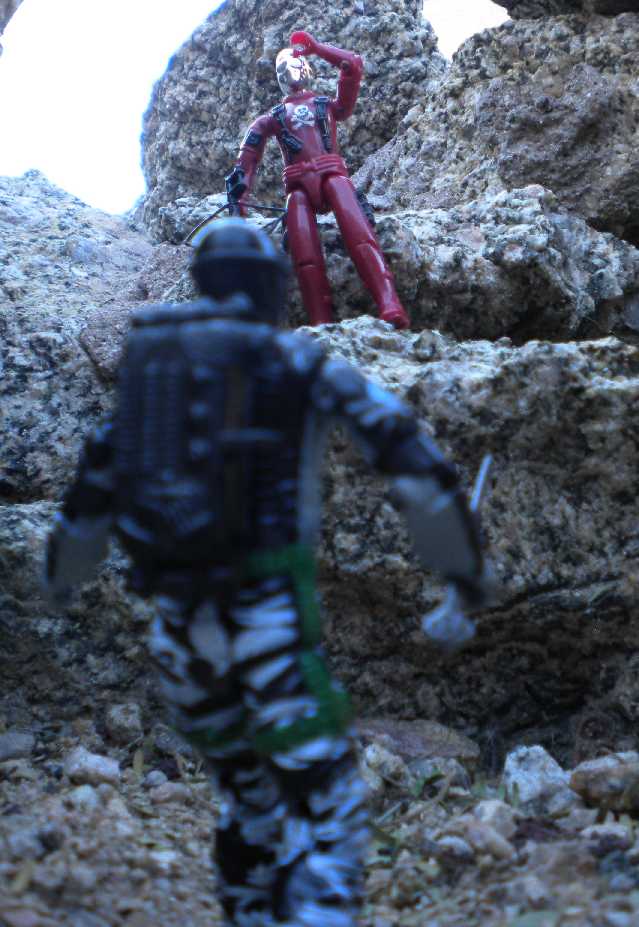