1988 was the year I quit collecting Joes. Without me obsessing over all the figures and vehicles, my younger brothers lost interest in the property, too. My youngest brother would get a few figures and vehicles through the next year. But, he never followed the line with the enthusiasm that I had. As such, most of the 1988 vehicles remained foreign to me until I returned to collecting as an adult. With the vehicles being absent from my childhood, the only exposure I had to the drivers of these items was through their appearance in the comic. Drawn on paper, many of the figures looked much cooler than their actual release. Others, though, didn't appear enough for me to really form an opinion. They looked interesting, but didn't make enough of an appearance for me to really care about them one way or another. Such was the fate of the Secto Viper. My exposure to him was a couple of brief comic panels. He looked interesting enough, but was not overly distinctive and was in line with the other Cobras of the time. When I found the first images of the figure in the mid 1990's, though, my opinion quickly changed. The Secto Viper was a figure I had to own due to its distinctive look and specialty within the Cobra hierarchy.

The Secto Viper's calling card is the 1950's sci fi inspired, clear, bulbous helmet. This topper is the keystone visual element for the figure and instantly conveys that the figure is either a deep sea diver or an astronaut. (Really, this figure would have been perfect for Star Brigade in 1993 or 1994, certainly a better choice than the TARGAT figure.) The yellow and black color scheme (with red highlights) is somewhat basic, but it is also effective for someone who would operate heavy equipment underwater. If you look at the mold, though, it is full of details that would be seen on a deep sea operative. The chest is covered with two rows of small hoses that would be the suit's air recycling system. It speaks to a self containment of the Secto Viper's uniform that would allow them to forgo bulky air tanks for quick repairs or escape should their BUGG be disabled under the water.

I have always liked the notion of deep sea combat. The unforgiving nature of the environment always added an element of danger and randomness to the battle. A simple cut into a deep sea pressure suit was a near instantaneous fatal injury as the deep water pressure would pulp the inhabitant of a perforated suit. So, the combatants in this realm would have to be overly cautious while still being aggressive enough to take out their enemy. For a time, this type of specialized battle was my primary focus. Figures like Deep Six and this Secto Viper could fight outside of a sunken Cobra base. With spotty communications at the depths, it allowed for unsupported danger that took only the steeliest souls.

Like many things in my collection, though, the fascination with deep sea warfare eventually passed. As more figures came into my collection, the possibilities expanded and the limited availability of deep water troopers helped to stifle that as a primary concept in my Joe world. Which isn't to say, though, that the Secto Viper hasn't retained some popularity. This is a figure who, today, finds his home on my Moray. I see Lampreys as more maritime troops for Cobra's naval operations. They are often the uniform of choice for Cobra Eels who are on a land based mission and don't want to wear a wetsuit while they are fighting. So, the Secto Viper becomes the primary aquatic vehicle operator for Cobra. In this regard, the figure sees more use. And, since the Moray is an open cockpit vehicle, the figure displays very well, much more so than as the driver of the BUGG.

The Secto Viper is an example of figure, though, whose value is heavily diminished if he lacks accessories. The figure's clear helmet is an essential element of the entire package. While open faced Secto Vipers can have uses, the helmet is required for the full experience of the figure as it completes the entire ensemble. Secto Vipers also included small, bizarre pistols. These weapons are difficult for the figure to hold in any position that is not drooping towards the ground. But, the odd design of the gun fits the look of the figure. With anyone else, this gun would be a tough sell to collectors. But, with the Secto Viper, it seems a natural fit. The 1988 vehicle drivers in general tended to be light on paint applications, bright in base colors and packed without accessories. The Secto Viper fits the first two traits, but not the third. And, in this case, the accessories were a perfect match that really accentuate the appreciation for the figure's design.

The 1988 and 1989 vehicle driver molds had three distinct fates. They were either: sold to another company, sent to India for use by Funskool, or tucked away in Hasbro warehouses where they were used on obscure convention figures or just forgotten about. The Secto Viper mold died an Olmec death.  After it's use by Hasbro in 1988 and 1989, the mold went fallow.  In the late 1990's, Hasbro sold the mold to Olmec toys where it was used to make the Bronze Bomber figure named Firebomb.  This orange version of the Secto Viper is a nice companion piece to the Hasbro figure.  But, the orange color and lack of paint details really don't bring anything to the mold you don't get from the original figure.  All the molds sold to Olmec disappeared when that company was liquidated by the government.  So, the figure was not eligible to appear in any future sets.  In a different color, maybe as a companion to the Eel or in colors similar to Copperhead, the Secto Viper could be an amazing figure.  It's too bad collectors never got the chance to see another take on the mold.

Secto Vipers have gotten quite expensive in recent years.  Mint and complete with filecard samples often sell for as much as $40.  Figures with just the helmet still often break $25.  But, for a Cobra army building figure that has captured collector attention and has a unique helmet, a very small pistol and who was only available with an odd, higher price point vehicle at a time when Joe had no daily media to support it, that's probably about the right pricing.  Collector tastes evolve, though.  And figures like the Secto Viper can see pricing ebb and flow over time.  In time, you might be able to get this figure cheaper. (Especially now that high quality reproductions of the helmet and gun have hit the market.) Personally, I like the Secto Viper, but find using him difficult.  He has a role in the Moray, but that is limited duty for a figure that has such a distinct look. Perhaps, one day, I'll have a BUGG or Hammerhead which will be manned by various Secto Vipers. Until then, though, I'll have to be contect with him as the crew of the Moray. 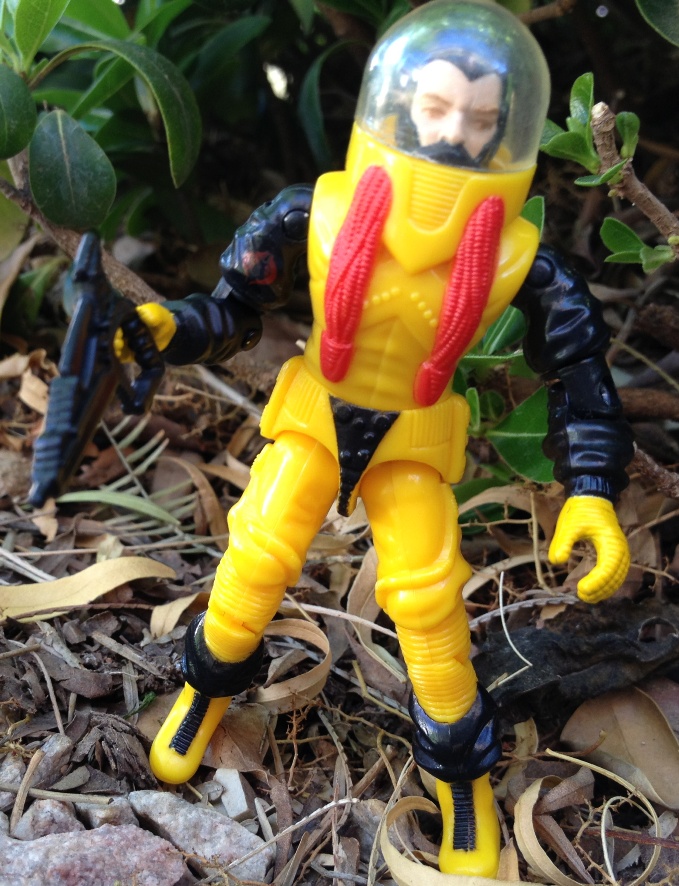 Posted by Robot_Sonic at 9:37 AM
Email ThisBlogThis!Share to TwitterShare to FacebookShare to Pinterest
Labels: 1988, Secto Viper, Vehicle Drivers