I have often chronicled my Mission to Brazil figures.  In fact, with the addition of this Leatherneck figure, I have now profiled all five figures that were included with the set.  The reason for this is that the Mission to Brazil figures were among the most important items in my collection during my final year of playing with toys in 1987.  They hold a special spot with me for that reason.  The sentimentality likely obscures the fact that this set is mostly less than stellar repaints.  Had this set been released in 2006, I would likely have lambasted it for the terrible color choices.  (Though it would have gotten points for the molds.)  But, vintage paints a different picture for me and the fact that these figures were an important part of the tail end of my childhood Joe experience forever makes them important to me.

The Mission to Brazil set featured 5 figures (Leatherneck, Wet Suit, Dial Tone, Mainframe and Claymore) and a cassette tape all boxed together in a nice presentation for retail shelves.  My local Toys R Us store stacked them on the front endcap of the Joe aisle during the holiday season in 1986.  There were stacks and stacks of the sets sitting there.  I would pick up the set and look at each time I was at the store.  And, each time, I would notice the stacks getting smaller and smaller.  I never, specifically, asked for the set.  But, 1986 was an odd year.  Usually, I got a large G.I. Joe toy for my birthday.  In 1983, it was the Skystriker.  In 1984, it was the Whale.  In 1985, it was the Moray.  But, I didn't get such a present in 1986.  The Terrordrome was out.  And, while it was more expensive than the other toys, it was not outlandishly so.  But, I have no recollection of even wanting a Terrordrome.  (I had bought myself a Tomahawk in the fall when I got $50 for house sitting for a neighbor while they wintered in Arizona.)  Something else must have occupied my time in the fall of 1986 to take my focus off of Joe.  I can't recall what it was.  But, on Christmas morning, I found the Mission to Brazil set under the tree.

1986 was a huge Joe year for me.  I had tons of lawn mowing money and bought up each and every figure I found.  I completed the full run of '86 figures by summer and then focused on vehicles.  (I got both the Havoc and Stun by calling local toy stores to ensure their stock.  The local Children's Palace said they had Stuns in stock, but couldn't guarantee how long they'd be there.  I went a few days later and found them, literally, stacked half way to the ceiling.  I guess they overestimated short term demand.)  I spent my time developing a rich alternate world in which I could immerse myself for hours.  Each and every figure I owned had a more than superficial characterization.  And, the newer figures all got the largest roles.  As such, getting repainted versions of characters I already owned didn't really excite me.  What did excite me, though, was that I now had figures who could be used as representations of Joe army builders.

I needed Joes who could die.  But, I didn't want to kill off major characters as I had a long going continuity and killing someone meant the figure would then be useless.  (I would kill off Joes whose figures broke or wore out, though.  When I got newer versions of those figures, though, I was left with a conundrum of how to bring the character back.)  The Mission to Brazil set gave me four new army building figures.  Wet Suit was a nameless diver who could die at the hands of Eels.  Mainframe was a scientific trooper builder who would man command posts, gunnery stations or missile units.  Dial Tone was a hybrid.  I liked the figure and made him more of a character.  But, he broke early and didn't get the attention the other figures did.  This Leatherneck became my de facto special forces trooper.  Armed with the excellent M-203, these troopers were the equivalent of the Cobra Snow Serpent (the best trained troopers in Cobra!) and were nearly Joes.  Many of the later characters of my own creation had their roots in these special forces units.

In this capacity, the Mission to Brazil figures saw great amounts of use.  This Leatherneck was often the final wave of reinforcements who would arrive to save the Joes.  There were times when he was a lone commando who was paired with Joes.  He would then fail to impress and die, or become someone whom the Joes would watch for eventual membership.  Somewhere along the line, I assigned the Leatherneck figure the grey Zap bazooka from the Battle Gear pack.  This made the special forces more deadly as they carried assault rifles, grenade launchers and the bazookas.  When the brown version of Leatherneck's rifle was released in a later Battle Pack, I gave that to this figure.  This allowed me to give the grey version to the 1986 General Hawk figure.  Hawk then became a younger, combatant General rather than an older, figurehead type character.

Throughout 1987, the Mission to Brazil Leatherneck figure was an essential part of my collection.  He went with me to my Grandparents' homes.  I actually created an entire storyline for the character around a huge, underground Cobra prison that was defined by the limestone terraced walls of my Dayton Grandparent's home.  As 1988 began, though, my Joes were put away.  I was too old to be playing with them.  Leatherneck was among the last figures to be packed into sandwich baggies inside some old shoe boxes in my closet.  He retained his relevance for quite some time.  But, once the figure was packed away, his importance slipped.  When I restarted my Joe collection in the mid 1990's, the special forces army builders were trumped by a new series of special commissions troopers.  These characters relegated special forces to 2nd class status and this Leatherneck figure has never again gained the popularity he enjoyed in my youth.

The Leatherneck mold was used just three times.  The first for for the original figure.  This Mission to Brazil repaint followed in the same year.  The final release came in Brazil.  There, around 1991, the figure was released in colors based on the version 1 figure, but using a little brighter green base color.  That figure (Oficial De Reconhecimento) is also named Leatherneck  The mold disappeared from there.  Most of the figures released contemporarily with the Leatherneck in Brazil have also never reappeared.  Hasbro might have had the mold, or they might not have.  Either way, collectors only have two distinctive appearances for the character with a third, derivative, variant from the International marketplace.

Mission to Brazil figures are more expensive than their retail release counterparts.  There was a time when they were $30 figures with some going as high as $50.  But, the fact that they include the same accessories as the retail release helps keep the prices tempered.  These days, you can get them between $12 and $18 depending on the people in the market.  Most dealers still try to get $30 or more.  And, those do sell from time to time to impatient collectors.  The distinctive filecards for the set are the harder find and tend to raise prices up.  But, if you just want the figure, they are much more affordable than they were a few years ago.  I have a sentimental attachment to the Mission to Brazil set.  Without that, it's doubtful I'd have all the figures, or maybe any of the figures.  But, the set is worthwhile.  It's nice to have an environmentally themed Leatherneck figure and it's nice that some of these great molds say at least one vintage repaint.  In this day and age, many collectors have space as a premium.  If I'm making cuts, only the Mission to Brazil Wet Suit would beat out his original paint job for a spot in my collection.  But, that's an imperfect argument.  I'd keep this Leatherneck figure over many other figures released both before and after him.  It was nice to have him out to remind myself of younger days.  The value in that is immeasurable. 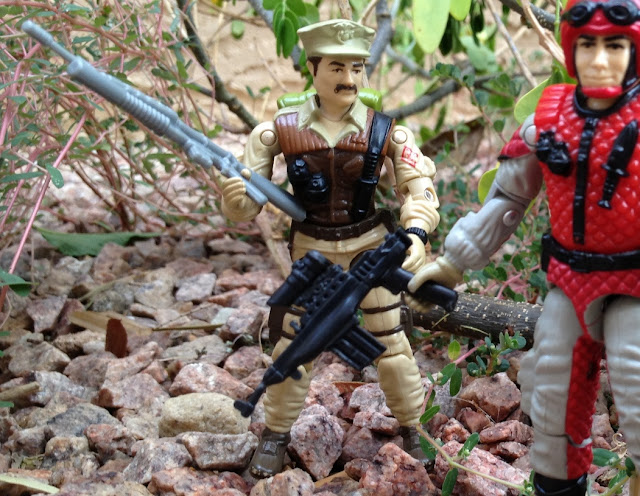 Posted by Robot_Sonic at 4:30 AM
Email ThisBlogThis!Share to TwitterShare to FacebookShare to Pinterest
Labels: 1986, Leatherneck, Mission to Brazil, Retailer Exclusive