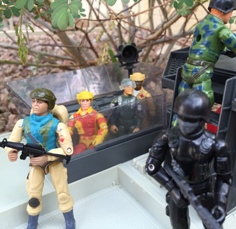 While my first G.I. Joe figure was Breaker and my earliest memories of the line were playing with my younger brother's Clutch figure, the reality is that I am a Joe collector today because of one figure and one figure alone: Airborne.  In the late, post "Return of the Jedi" summer of 1983, I was captivated by the Airborne figure.  The swivel arm battle grip opened up a huge new realm of play possibilities.  Plus, the figure and his accessories were nothing short of spectacular.  Airborne piqued my curiosity and I found the entire slate of 1983 Joes to be so much more entertaining than the Star Wars figures that had dominated my play patterns from May through June.  With that new notion in hand, I've embarked on a 30+ year collecting odyssey with Joes.

Condor was released in Argentina by the Plastirama toy company at some point in the late 1980's.  He is very similar to the American Airborne figure.  The primary differences are the much brighter blue of the Plastirama release that also covers the figure's collar and the dark, olive colored helmet.  Aside from those differences, the figures are the same and accomplish the same visual tasks.  This is in line with the majority of foreign releases with the drastic repaints/amalgamations being the exception.  As such, the value of Condor is the same as Airborne: it's just a slightly different look for him.  Condor works fine in the Dragonfly, HQ or on his own.  But, given the preference, I'd go with the Hasbro figure due to the softer blue colors and general higher quality.

In the summer of 1983, my younger brother got an Airborne figure.  I hadn't paid much attention to Joe since the first "Return of the Jedi" figures appeared at retail in late spring.  I spent the early summer of 1983 hunting down each and every new figure in the Kenner Star Wars line and was enthralled by the new removable helmets and updated cloth goods that were included with many figures.  I had completed the run of Jedi figures as the summer came to a close.  With the story from the saga pretty well wrapped up, I was hard pressed to find major adventures for many of my new toys.  So, I grabbed my brother's Airborne figure and had him stow away on the Millennium Falcon where he was carted off to battle some space aliens.  It was in the course of this play that Airborne's gear grabbed me.  The greater posability was a nice plus.  But, when coupled with the bayoneted rifle, it opened up a new world.  From that day, Joe replaced Star Wars as my toy of choice.  The reason I'm a collector today is due to the grip that the first Airborne figure placed over me.

Having a chance to get some Airborne variants was a nice way to revisit those memories.  I've long said that the appeal of foreign Joes to me is that they allow to find my favorite figures all over again.  Condor gave me that chance with Airborne.  But, truth be told, Condor doesn't quite capture the magic that other foreign repaints have.  It's likely a function of the fact that the carded version I opened was missing a paint application on the figure's knee and the insignia on his arm is blotted out.  These were factory defects and likely sullied my take on Condor.  At some point, I'd like to get a new version that's painted better.  Maybe that will be the catalyst for the nostalgic influx I'm searching for.

Plastirama figure quality is all over the board.  It's possible to get a very high quality figure that is nearly on par with Hasbro released.  It's more common, though, to get figures with bad paint, questionable joints and overall fragility.  Much of this is likely attributable to the poor storage conditions of the source of most of the Plastirama figures available in the U.S.  So, even if you open a carded figure, it's likely that the quality won't be there.  For display, this isn't as much an issue.  But, taking the figure in and out of vehicles or constantly swapping out his accessories may result in significant damage.  If you look at my sample figure, the missing paint application on his knee and the smeared arm insignia were factory issues straight off the card.  So, even buying carded figures is no guarantee that you'll get a high quality specimen.

After the Airborne was used in the U.S. for both the original figure and some versions of the Steel Brigade, the mold became a South American staple.  Condor was released in both Argentina and Brazil, though with slight differences between the figures depending upon their Plastirama or Estrela manufacturing heritage.  (The Estrela figure also featured unique card art that is well worth acquiring.)  Estrela would also color the figure in Python Patrol colors and switch the mold's allegiance when they released him as the highly popular Gatilho figure.  From there, though, the mold died.  It's unlikely that it left Brazil so Hasbro never had the chance to offer the mold again during the repaint era.  It's unfortunate as the mold lends itself to solid repaint possibilities.  But, that was not to be.

There was a time when a collector could have bought all the carded Condor figures he wanted for under $10 each.  There were even dealers who sold them in lots of 10 or 20 figures for substantially less than that.  But, those days are gone.  But, that doesn't mean this figure is expensive.  While you don't see Condor with the frequency you did just a few years ago, they are still plentiful.  Loose figures can be purchased for under $10 and carded figures can still be found for well under $15 with a little patience.  It's definitely worth that price to pick up a Condor.  But, his value to a collector is as something different and I would recommend the American Airborne as the lone representative of his character if you wish to reduce your collecting footprint. 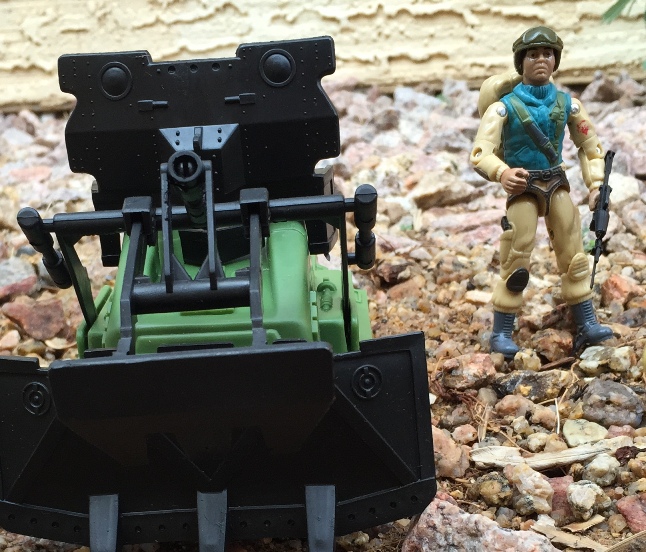 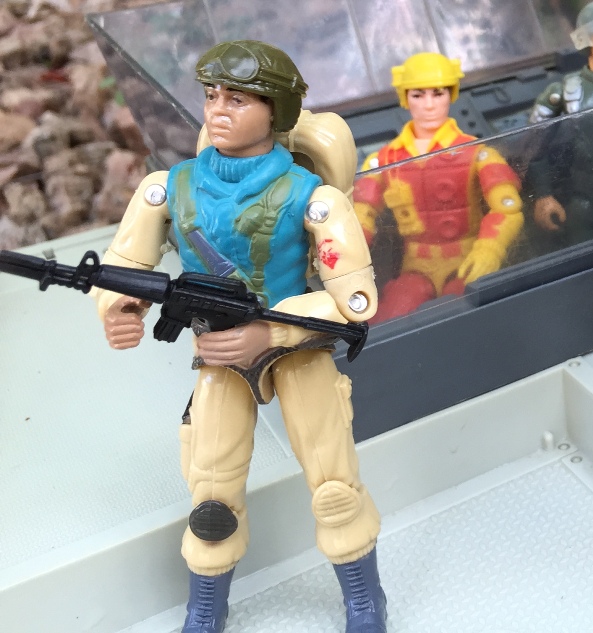 Posted by Robot_Sonic at 4:00 AM
Email ThisBlogThis!Share to TwitterShare to FacebookShare to Pinterest
Labels: Airborne, Argentina, Condor, Foreign Figures, Plastirama