Cobra had some great aircraft in the 1980's.  The Rattler was an iconic mold that gave Cobra incredible air support capabilities.  The Night Raven was a sleek spy place that, while it could be used as a fighter jet, wasn't really the dog-fighting/combat equivalent of the Skystriker.  The Condor was a futuristic bomber that expanded Cobra's air force.  In 1990, Hasbro released the Hurricane.  This two seater jet had featured VTOL capability and a fully armed missile dec that showed the plane was ready for air to air action with any Joe aircraft.  The pilot of the Hurricane was a technology enhanced pilot named Vapor.

Vapor followed in the vein of previous Cobra pilots in that he had direct shunts to his brain to aid in his fighting capabilities.  He is a direct heir from the Strato Viper, Star Viper and other cybernetically enhanced Cobras.  When he was released, Vapor had to be the "most advanced" pilot.  (This followed with every Cobra being the "baddest" or "worst" in order to make them appear more villainous.)  His head was very robotic in appearance to suggest the extent of his electronic integration.  It is this design, though, that is the figure's limitation.  While the mold is fairly well done and distinctive, the figure's head can only be described as odd.  It has two different sized eyes and a beak that sticks out from under them.  The ears are very pronounced.  Basically, the head looks like a bad robot from the 1960's.  It's not an overly human head and looks out of place on the figure.  The figure's lack of high altitude survival gear can be explained through the helmet's odd design.  (The "beak" houses an air mask, the eyes are for the electronic inputs, the ear shapes are to maintain pressure and keep the pilot's equilibrium at high altitude, etc.)  But, it does not take away from the overall bizarre-ness of the figure's head.

The figure's colors are excellent.  The grey and black base offset with red highlights is reminiscent of the Strato Viper and is firmly within established Cobra colors.  The silver head is very distinctive.  But, the metallic tone only helps enhance the robotic look of the head sculpt.  The red waist is a bit much.  But, is not so bad as to ruin the overall ensemble.  The chest is relatively barren, aside from the straps affixed to the centered Cobra logo.  It's a relatively clean look that fits with existing Cobra legions.  It is all this that had lead to the figure's relative popularity.  Vapor is well liked by collectors and is generally expensive to acquire due to his quality.  It's likely that, with a few tweaks, he'd be among the most expensive retail release Cobras.  But, the imperfections prevent him from ever becoming that popular.

There is ambiguity in Vapor's filecard as to whether he is an individual or an army builder.  Collectors have, naturally, gravitated towards making him an army builder.  However, the filecard is vague enough that the any individual collector can make their own determination.  My feeling is that the filecard's cautious wording is an indication that Vapor is an individual.  The notion that he is more advanced in terms of technological integration than both the Strato and Star Viper would imply a level of expense that would be difficult for Cobra to expend.  But, at the same time, the box shows two Hurricanes flying, though you can't see the pilot of the second aircraft.  As Vapor follows the color palette of the Strato Viper he could be seen as a legion building extension of their function, or as the highest ranking of them members.

If you look at the Hurricane box, you will see Vapor armed with a greyish/silver version of Major Storm's gun.  The figure was not actually released with this weapon.  It was a cause of much consternation for a while as people would claim memories of having a gun with Vapor.  But, the weapon was removed before the Hurricane and Vapor went to production.  The gun's appearance on both the box art and filecard indicate it was a late change.  But, the gun was not produced and the Vapor figure is complete with no accessories.

Vapor was released with the Hurricane in 1990 and 1991.  The mold then disappeared for 12 years until Master Collector surprised collectors with a repainted Vapor at the 2003 convention.  This time, there was no ambiguity as to the purpose as the mold was renamed an Air Viper.  It was good to see the mold and the repaint was pretty solid.  On one level, it was great to get a repainted Vapor.  On the other hand, Vapor's appearance showed how many molds that Hasbro actually had available to release, despite their insistence that their stock was very limited.  Hasbro could have done so much and the molds that appeared in some convention sets showed that there was a greater inventory available than Hasbro would admit to.  Imagine a decade in the 2000's where Hasbro released hundreds of vintage molds rather than dozens.  They could have done it.  But, they didn't.  So, there are just two versions of the Vapor mold out there.  Both are solid.  But, it's just the two.  The head could have been re-purposed into a new BAT very easily.  So much wasted potential.

In the mid 2000's, Vapor figures came into favor with collectors.  There was really no reason he found an audience while other figures of similar rarity languished in obscurity.  But, it happened.  In short order, army building collectors drove Vapor prices upwards of $30.  In the decade plus since, prices have calmed a bit.  But, high quality Vapors with the filecard routinely fetch more than $20 today.  If you just want the figure, you can consistently get a good one for $15 to $17 with some dropping as low as $12.  The reality is that what was once considered a rare figure has come out in droves.  While he used to be hard to find, Vapor figures now show up with regularity.  The lower price makes his acquisition worthwhile.  It's a solid figure and the Hurricane is an excellent vehicle.  But, Vapor isn't the best Cobra pilot.  I'd still take the Strato Viper or Aero Viper over him any day.  But, the mold is interesting and the character is a blank slate.  That brings value to the figure and makes him someone that should call most collections home. 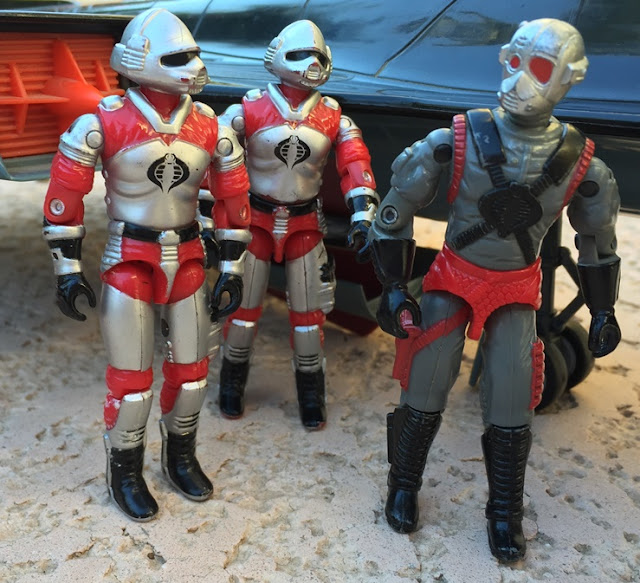 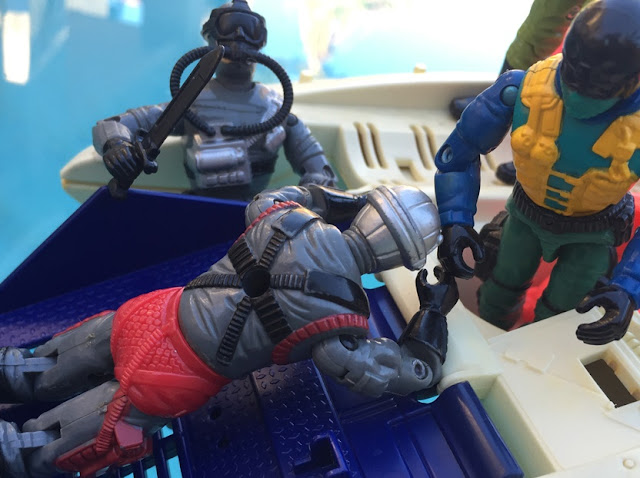 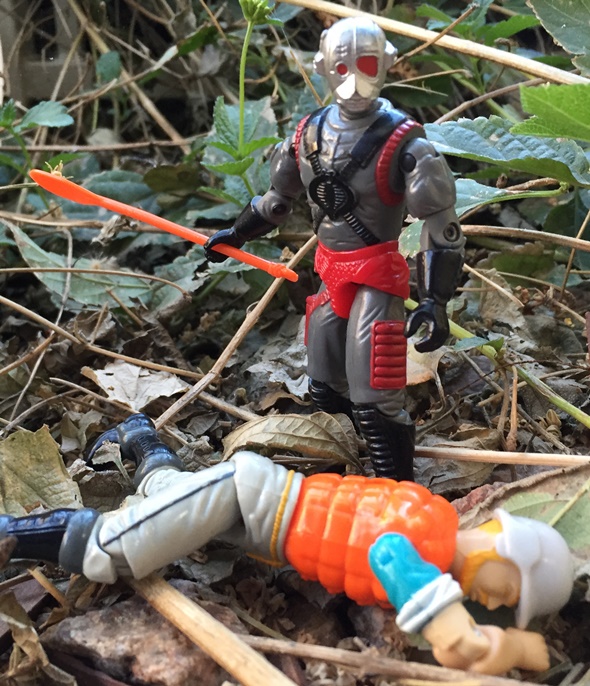 Posted by Robot_Sonic at 2:00 AM
Email ThisBlogThis!Share to TwitterShare to FacebookShare to Pinterest
Labels: 1990, Vapor, Vehicle Drivers