The last couple of weeks have been very busy.  Kids back to school.  Work's getting hectic.  And, to top it off, I spent nearly a week very sick.  My profiles have suffered for it and I needed a bit of a breather to catch up and not feel like I short changed a figure I wanted to review.  So, instead of something new, I'm looking back.  Yeah, it's lazy.  But, sometimes you need to take a shortcut to get you back on track for the long haul.

Fifteen years ago today, I profiled the 1988 Tiger Force Recondo figure.  To this day, I don't know the origin of this figure.  It showed up in our house one day in the late 1980's.  I surmise that the kid next door left him in our yard and either my Dad or brother found him and just assumed he was ours.  I was pretty much out of Joe at the time.  But, when I found the figure in the house, I thought he was cool.  And, he had his gear and was unbroken, which was more than I could say for my 1984 Recondo at the time.  So, I stashed him away with the rest of my Joes that I was trying to save from my little brother.

I was relatively successful in this endeavor and most of the figures I packed into baggies inside a Lego carry case survived to the modern day with little or no wear.  I really look at that as the beginning of me being a collector.  I knew I would want my Joe toys again some day.  I didn't know when or where.  But, they would be something for which I would be grateful that I had kept from childhood.  The fact that an online marketplace would make Joe figures accessible at any time of the day was unfathomable to me at the time.  But, it all added up to the collector mentality that I carry today.

This Tiger Force Recondo is nice because the Tiger Force aspect of his design is downplayed.  If you take away the yellow stripes on his pants, this figures could very easily be mistaken for a Night Force Recondo.  For that reason, I find him useful.  While I like the original version, the light tan base color can be limiting, especially for a jungle trooper.  This is a nice, alternate look for Recondo that is true to the character, but gives him some depth.  (Plus, his pack is the "Brazilian" green color.  I love that color green and it's rare to find it on a U.S. release.)  In general, this is just a solid repaint that everyone should have.  It's a harder to find vehicle driver in lieu of a regular, carded release.  So, he's a bit tougher to track down and more expensive than the original figure.  But, I think he's worth it just for a different look for the character. 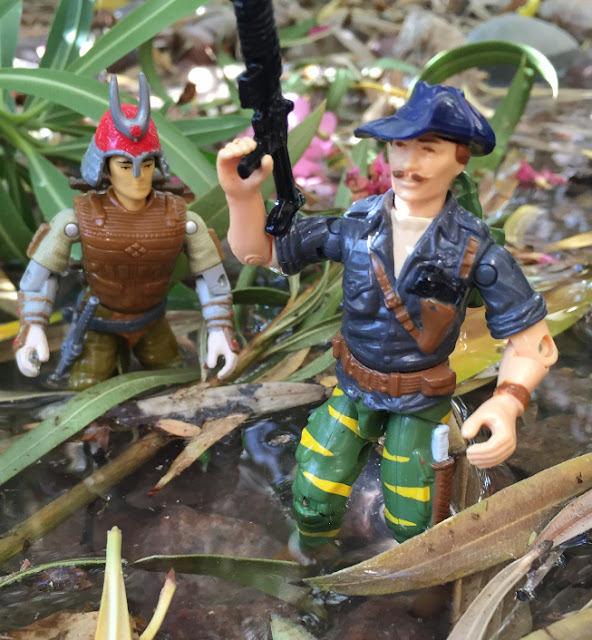 Posted by Robot_Sonic at 2:40 AM
Email ThisBlogThis!Share to TwitterShare to FacebookShare to Pinterest
Labels: 1988, Recondo, Tiger Force