In early 1986, one of my younger brother's friends found pretty much all the new Joes at once.  He brought them to school and immediately put me into a "must have it now" mindset.  This was exacerbated when my brother found the lone 1986 figure at Target, a Dial Tone figure.  I was upset and spent the next few months desperately trying to get over his win of the Dial Tone find.  At some point in February or early March, word got around that the local KB Toy store (always a hot bed of early finds) had a new vehicle.  I convinced my mother to take me and found the Dreadnok Thunder Machine.  At first, I was underwhelmed by the vehicle and the figure included.  However, there was no way I was going to pass it up as it would afford me the chance to be the first to have the 1986 catalog insert that would show all the new toys rather than just the cardbacks.  So, I bought the Thunder Machine, enjoyed the jealous looks of my friends as the insert was passed around school and promptly forgot about the vehicle.  One of the reasons for this, though, was the less than stellar driver: Thrasher.

The vintage Thrasher figure was pretty bad.  His head was too big, he didn't have nearly enough shirt and his weapon was just lame.  In short, he was nothing that I wanted to use.  Not even being new was enough to save the figure.  Fortunately, he was able to just sit in the Thunder Machine, out of sight, where he would periodically die.  That was the extent of my interaction with him.  That summer of '86, though, Thrasher showed up in the comic.  I was fond of the story arc where he was introduced, even if the character himself was fairly forgettable.  This brought the figure out.  But, his poor overall quality quickly relegated him back into obscurity.

In late 1986 and into 1987, though, my Cobra armory was in desperate need of an upgrade.  While I still had decent Hiss Tanks, they had been around for nearly 5 years and were old hat to me.  I had gotten a STUN in '86 and it was a good foil to the Havoc.  But, when Cobra attacked the Joes in my room, they had two Hiss Tanks and a STUN.  That was it.  (The Stinger had long since died a thousand deaths.)  Against the Mauler, VAMP, Havoc, Dragonfly, Bridge Layer and a host of smaller vehicles, Cobra didn't stand a chance.  So, the Thunder Machine was retrofitted as a Cobra vehicle.  Out went Thrasher and in went a spare Viper whose thumb had broken.  The Thunder Machine became Cobra's anti-infantry weapon.  And, with that, Thrasher's limited role was taken away.

As 1987 progressed, Thrasher found use as a random civilian.  (All the Dreadnoks were moved to this role, eventually.)  Here, he would attack either Joes or Cobras from inside an A-Team van.  It was a way to expand beyond the Joe vs. Cobra dynamic.  But, those were short lived adventures and the figure was merely filler rather than a character.  As such, my childhood Thrasher figure survived in excellent shape.  This was not due to diligence but indifference to the character.  And, so, Thrasher faded out of my mind.  In 2004, the figure was repainted for a convention exclusive.  I bought the set, but never actually opened Thrasher.  (Zanzibar was opened the minute I got the set.)  He stayed in his bag until I sold him off.  Then, came this 2005 figure.

When the final comic packs were announced, they were met with relative yawns.  Collectors had seen the #9 comic pack for years.  So, finally getting it at retail was anti-climatic.  The Tunnel Rat/Hawk/Flint pack seemed boring since there had been so many Tomahawk and Tunnel Rat versions and the Flint mold had been used a few times.  The Fred figure was worth it for the head and Zartan was a cool upgrade.  But, both he and Zarana had appeared in the 2004 convention set and has recently been Funskool releases.  So, they seemed tired.  The Dreadnok pack was the most damning, though.  All three of the figures had been released just one year prior in the convention set.  While this set was pricey to buy prior to it's release, most of the figures from it were available for under $10 (yes, including Thrasher/Zanzibar) in 2005.  So, there was really no need for the figures to be so quickly re-visited: especially after the Dreadnok themed convention set was met with such malaise from the collector base.

But, the Dreadnok pack did feature excellent upgrades of both Buzzer and Ripper.  Buzzer's head was akin to his comic appearance and Ripper's melon was shrunk down to a more realistic size.  The colors on both figures were kept in line with the character's original looks, but given just enough difference that they were worth picking up for another look for the characters.  Thrasher, though, did not get the same treatment.  His new head was more narrow.  His hair was less '80's, but still overly large.  While the vintage head was bad, this new head was not much of an improvement.  The real failure, though, was the color scheme.  The original Thrasher featured a subdued back and grey motif that fit with the "Road Warrior" vibe of the design.  This new figure had orange highlights, pastel green details and a bluish-grey base with purple highlights.  Basically, the figure is a mess.  There is nothing about him that is an upgrade in any way.

But, in this eye-gouging menagerie of colors there is the redeeming factor of Thrasher being something different.  The comic pack and Toys R Us set colors of that era didn't take many chances.  The same themes of tan, green, blue and red were released over and over again.  Getting a figure with some different colors made for something a little closer to the variety of the vintage line.  In that vein, this Thrasher was welcome.  But, at the end of the day, the Thrasher mold is still fairly bad and the character's look has not aged well at all.  The new head brings nothing to the mold that you can't get in the vintage version.  In general, it's a bad figure.  (And, to top it off, mine is starting to discolor even though it's been stored out of sunlight and only used for this profile.  The 2000's era plastic may be worse than we thought.)  But, at least it's bad for different reasons.

In 2004, the Thrasher character was "fleshed out" more in a Convention filecard.  They gave Thrasher a file name and had him born in Belgium.  This is all fine and good.  Except for the fact that Thrasher's original filecard is dripping with classic Larry Hama disdain for suburban, yuppie life of the 1980's.  While not a uniquely American stereotype, it was the roots of what would later become the "Ugly American" archetype.  Aside from this, Thrasher's original card heavily hinted that he simply wandered into the swamps and found Zartan.  Knowing Zartan's base of operations was in the Florida Everglades, it implies more and more that Thrasher was a lost American youth.  (Another favorite Larry Hama theme that appeared in the comics more than once.)  So, there's a definite schism between the various characterizations of Thrasher.  For me, the character is so poor that I really don't pay either much heed.  But, based on my introduction to Thrasher in 1986, I'm more inclined to stick with Hama's original dossier rather than the fan fueled update.

This Thrasher figure was heavily clearanced by both Hasbro Toy Shop and, later, Toys R Us.com.  This put massive amounts of cheap Dreadnoks into the marketplace.  Today, you can get a mint, complete Thrasher for $3 or $4.  But, they are not nearly as plentiful as they once were.  While carded Dreadnok comic packs used to clog online auction sites for 1/2 their retail price, they are now fairly sparse.  Even carded, though, this set doesn't eclipse much more than $20.  But, this is a case where buying the individual figures is a better deal than getting a carded set since you can probably get all three Dreadnoks for under $10 if you look hard enough.  (Buzzer is definitely worth it.)  Had I not been both a completist and a fan of the Buzzer figure in 2006, it's unlikely I would have this pack at all.  When they were blown out for nothing, I picked up a few extras.  Those, of course, are long gone.  But, a complete set remains.  While I'm not a fan of Thrasher in general or this figure in particular, it was a good way to get something different into the hands of collectors.  I can at least appreciate that effort: even if the execution was a bit off. 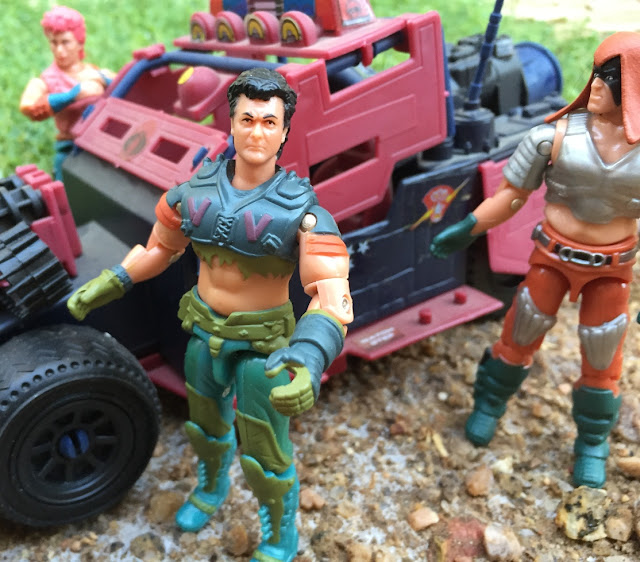 Posted by Robot_Sonic at 2:37 AM
Email ThisBlogThis!Share to TwitterShare to FacebookShare to Pinterest
Labels: 2005, Comic Pack, Dreadnok, Thrasher