As the Funskool G.I. Joe line wound down in 2002 and 2003, the company tried many things to prop up lagging sales.  Things like Grunt's inkpad, Metal Head's bomb makers and Law's crypto game were all designed to attract kids to the line.  As the gimmicks failed, Funskool pushed the envelope on a tried and true strategy: incorporating bright colors into the mix.  Most of Funskool's final figures were very bright and utilized orange, red and yellow to create an eye catching product for the kids of India to desire.  While they may seem ludicrous by American collector standards, those bright colors were popular among the Indian consumer base.  They also created some of the most memorable, if ridiculous figures in the history of the Joe line.  Wild Bill, Big Brawler, Grunt and Windmill are memorable for their terribleness.  But, one figure stands apart from them: Tripwire.  While the figure is hideously bright, the colors somewhat work.  And, the addition a big Funskool "BOMB SQUAD" paint application make this a figure worth owning.

When Hasbro cancelled the A Real American Hero Collection series in late 2001, they packed up a large quantity of recently used molds and sent them off in India.  Funskool quickly put these into production with Law, Big Brawler and this Tripwire figure.  As such, collectors were a bit fatigued on the Tripwire mold when it was announced.  Tripwire figures were pegwarming in American retailers through the end of 2002.  So, it seemed like the figure was out there in abundance.  Of course, this was the view of the American collector.  In India, the mold was brand new and had never been seen before.  So, Funksool's use of it made perfect sense.  But, for American collectors, that initial malaise towards the figure was quickly dissipated when they saw the first photos.

The bombastic orange, purple, red and gold color scheme screamed "FUNSKOOL!" and instantly gained the figure some collector credibility.  Many army building obsessed collectors of the day saw the figure, with his color scheme and obscured face, a perfect complement for their Techno Viper corps.  With this, the figure achieved a modicum of popularity that was rare for a modern, Joe affiliated Funskool figure.  But, like most Funskool figures, that popularity was short lived.  There was a lot going on in the Joe collecting world in 2003 and 2004.  New releases from Hasbro arrived on the shelves almost every month.  Toys R Us ramped up their production of vintage style Joe exclusives.  And, in general, Joe achieved a level of retail success unseen since 1990 or 1991.  This brand activity pushed Funskool to the wayside and this Tripwire became a footnote on that collecting era.

Nearly a decade and a half later, this Tripwire is generally appreciated by collectors.  The odd colors but bold styling have left Tripwire as a figure that is memorable and desirable enough for collectors to care.  You see the figure appear in many collections, even if he is not a feature of the few bastions of vintage Joe content that remain.  He is certainly more popular than Metal Head, Law, Windmill and the Incinerator  with whom he shares a general timeline.  Modern collectors have taken to customizing Trip Wire figures into the Funskool color scheme as a way to spice up the modern remakes of vintage figures.  Generally, this Tripwire is treated fondly by the collecting world: even when his color scheme and bizarreness do not seem to warrant it.

One of the greatest collector complaints regarding Funskool is the figure quality.  In the early 2000's, Funskool really started to let their quality slip.  Sloppy paint masks, shoddy construction and frozen joints were hallmarks of the Funskool stock of the time.  This was a far cry from the earlier Funskool offerings: which were very close to Hasbro quality.  But, the time of poorest quality coinciding with the timeframe of greatest availability created a perception of poor quality among Joe collectors.  Hasbro, to their credit, took notice.  In 2003, they took umbrage with Funskool's quality and forced the Indian manufacturer to improve upon it: drastically.  The result is that the figures manufactured in 2003 have a much higher construction quality and crisper paints masks than figures from even one year prior.  You can see that quality on Tripwire with the sharp golden highlights and crisp lettering.  As such, this figure is more representative of the whole of Funskool offerings from the late '80's through the early 2000's than most of the other figures with whom collectors are familiar.

Tripwire features interesting accessories.  Interesting in that they contain both parts exclusive to Funskool and modified accessories from the American figure.  At the core, Tripwire has his standard backpack with three, removable mines.  However, the mold has been modified.  Instead of a hole into which you could plug Tripwire's mine detector, the pack features a raised peg into which you can plug a standard, black hose.  This hose connects to the new accessory with the figure, his mine detector.  Why Funskool chose to make a new accessory when Tripwire's original mine detector was still available is a mystery.  But, we have our first Funksool exclusive G.I. Joe accessory in it.  The blue mine detector appears to be 2 pieces glued together.  What it lacks is any real way for Tripwire to hold it.  The handle is straight.  So, Triwpire looks awkward trying to use his detector.  But, as an accessory, it is exceptionally well done.  It is large, detailed and painted.  The black controls and red lights add a great effect and really make it more cool than it should be.  These details almost forgive the fact that the figure can't hold it!

For me, this figure was exactly what I wanted of Funskool during their final year.  It was a figure so odd that it would never have been released in the U.S. and was a welcome diversion from the sea of green, brown, red and blue that defined the vintage style Hasbro releases of the era.  As a pure oddity, the figure is great.  But, as a practical figure, this Tripwire's uses are limited.  Still, he makes for fun background fodder on vehicles or in the G.I. Joe HQ.  He is a nice complement to figures like TNT, Sokerk and the European Mutt.  He works with vintage Joes, but is different enough to really make a display pop.  And, if you really push the limits, you can find a way to use him as a Cobra army builder.

Tripwire was released the world over.  Aside from his American release, Hasbro also released him in Japan, Europe and China in the same colors.  (It should be noted there are slight color variances between some of the releases and the arm insignia on these figures can differ as well.)  Hasbro released an all red and orange Listen and Fun Tripwire in the U.S. in 1985.  The Tiger Force Tripwire was released in 1988.  Prior to the standard Tripwire figure being released in Europe, the mold was repainted for the excellently done Action Force Blades figure.  Tripwire got another U.S. release in 2001 in darker greens than the vintage figure and then showed up in this Funskool release.  So, Tripwire fans have a lot of different versions to track down and they are all drastically different save the 2001 figure.

Pricing on this figure is all over the map.  Being a later release and not a Cobra and not an army builder, Tripwire didn't get the market penetration of many other Funskool figures who fit those criteria.  But, he was readily available from multiple dealers for around $4 MOC for several years.  Now, he doesn't appear nearly as often as other, more popular Funskool figures from his era.  Those that do appear, run the gamut.  Carded figures sell between $5 and $7, but also all the way up to nearly $35.  Loose figures, which are harder to find, go as high as $15.  But, really, the pricing is determined by how many are on the market at a given time.  If you just see one a month, the $15/$30 price is probably realistic.  But, even two or three being available cuts that down to the $5/$7 split.  As a ridiculous oddity and a representation of everything 2000's era Funskool, this figure is a must own. 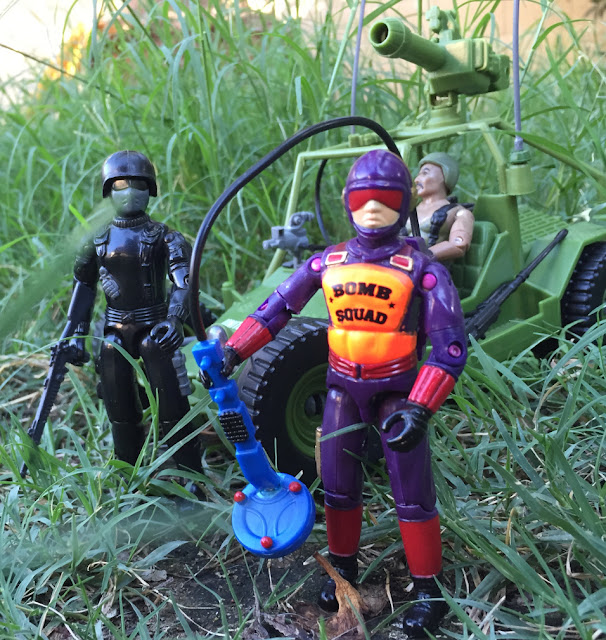 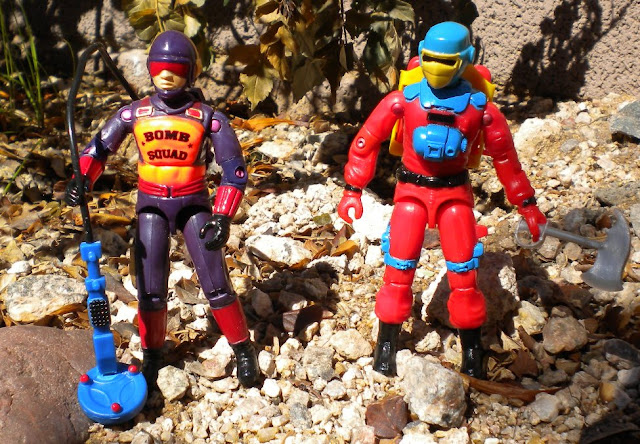 Posted by Robot_Sonic at 3:11 AM
Email ThisBlogThis!Share to TwitterShare to FacebookShare to Pinterest
Labels: Foreign Figures, Funskool, Tripwire