G.I. Joe #2 was one of the earlier back issues I acquired in late 1984/early 1985.  My local comic shop usually didn't have a ton of G.I. Joe back issues in those days, but I got lucky and found a #2 for $3: which was a princely sum back then.  I sucked it up and bought it and then marveled as the book climbed to nearly $50 on the secondary market in fairly short order.  To me, though, the value of the comic was the story inside.  The second issue and third adventure of G.I. Joe was really a great precursor for the later Special Missions title.  It featured a team of 4 Joes battling against a new enemy, the Eskimo Kwinn. It remains one of my favorite Joe stories to this day.

When it was announced in 2004 that this comic would be in the first wave of Hasbro's new comic pack products, I was excited to see what figures would accompany it.  When the images popped up, my initial reaction was one of great anticipation for the toys.  But, after I got the pack, my enthusiasm was tempered.  Snake Eyes was cool, but the colors weren't great.  Kwinn was good to see: but still flawed.  The third figure in the pack, Scarlett, was one I categorically dismissed.  Getting the character's head on a white Jinx body to emulate an appearance on one page of the comic wasn't that exciting.  But now, 12 years later, this figure holds up a bit better.

In the comic, Scarlett appears in the outfit on which this figure is based for 2 panels.  2 panels.  But, frankly, that's the type of obscurity I preferred that Hasbro mine when looking for figures to populate the comic packs.  The artistic comic renderings of the Joes, in general, were based on the toy appearances of most of the characters in the early issues.  So, finding an alternate appearance to give collectors something different was a strategy I appreciated.  What I did not appreciate, though, was the quality of the newly sculpted heads.  Most of them had issues and appeared to be out of place on the bodies with which they were paired.  Scarlett is a notorious offender.  Her head is the size of a pin and is woefully small for even the relatively dainty Jinx body.  She looks like the reverse of those old cartoons where the character goes into the steam bath and comes out with a shrunken body but normal head.  She is swimming in her collar.  If the uniform had a generally baggy appearance, this might have been less noticeable.  But, this tiny head atop fully stout set of shoulders and arms is a bit silly.

If you look at some of the unproduced comic pack figures, you see that sizing the heads was a problem for Hasbro.  Most of the early heads exist in two sizes: both of which are often flawed in different ways.  The comic packs were an experiment and it's likely that the budgets for design were eaten up on the heads in general.  Spending more to make them perfect was probably not an option once the two sizes were production tested.  As the line progressed, the new heads got better and culminated in the 2005 Firefly head which is just about perfection in terms of fitting with the vintage mold while improving upon the 21 year old design.

Getting past the design limitations, though, the figure is about as good a representation of Scarlett as Hasbro could have done.  The Jinx body for this figure is a good choice.  Though, the shoes are a departure from the bare feet of the comic.  The white color is so different from the vintage red, Vypra black and Tiger Force green that it appears much newer and less overused than many of the Joe molds that later dominated the comic packs.  The figure included the standard Scarlett crossbow as well as a new sculpt era rifle.  The are unnecessary accessories, but nice to have and give the figure more useful possibilities.

As a toy, the figure is fairly basic.  You get the new head.  I'm sure the pony tail piece was quite expensive for Hasbro to design, paint and produce.  That said, though, the figure only has a black belt, white shoes, a grey leg cuff and flesh colored hands and ankles as additional details.  It's very basic.  But, the outfit was very basic on the comic and the Jinx mold itself doesn't have a lot of flash.  This is a rare case where simplicity rules.  You get a major character in an off hand appearance that, while not overly useful, is different and true to the media from which she was drawn.

For that reason, I appreciate this figure.  As a character, Scarlett appeared quite frequently in the repaint era.  But, each and every one of those figures with the exception of this one used the 1982 body in different colors.  As such, you had a bit of chomatic diversity that was lost due to the mold's overuse.  Seeing the character in a different configuration was nice and gives collectors a way to use Scarlett differently.  All that said, though, the figure has its issues.  The Jinx body works well enough.  But, the head does not fit onto it all that well and the overall appearance is that it's too small.  On top of that, while the look is different, it is also boring.  It makes for a good sparring Scarlett for your dojo dioramas.  But, this figure's use elsewhere is rather limited.  But, with an appalling lack of female figure parts available, Hasbro can be forgiven for using what they had in a more creative way than just repainting the V1 figure in white and calling her an "arctic" version.

Like many later edition figures, Scarlett's pricing is all over the place.  Left to her own devices, the figure can sell for under $2.  However, you see many more selling for $8 or so.  Kwinn sells in the same range.  The Snake Eyes figure sells between $4 and $6.  Or, you can just buy a carded set consistently for $15.  The point is that if you want the figure right now, there are lots of affordable carded versions available.  If you want to economize, you can wait it out and likely get the figure for next to nothing.  Either way, this is a decent version of Scarlett and something very different for her character.  It's a way to incorporate her later "ninja" theme without having to resort to the awful 1993 figure.  In a sea of green comic banality, this figure does stand out.  That and the head make the figure worth owning.  And, the cheap price makes it easier to accept the figure's flaws, too. 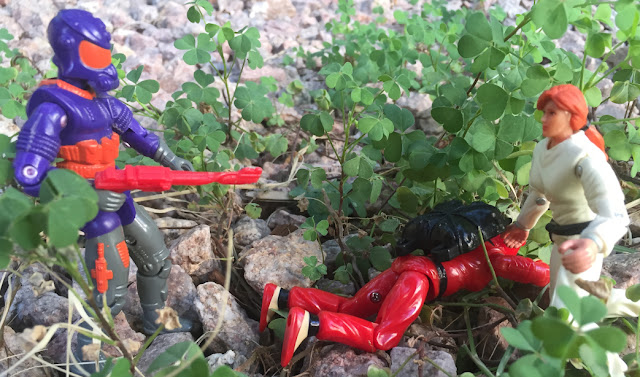 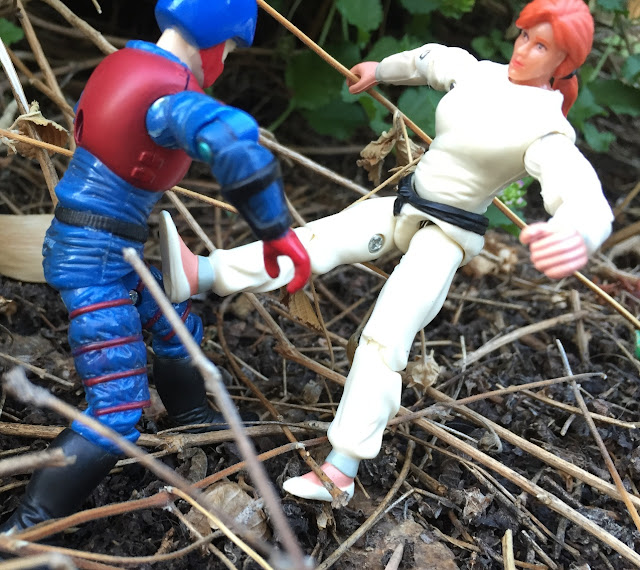 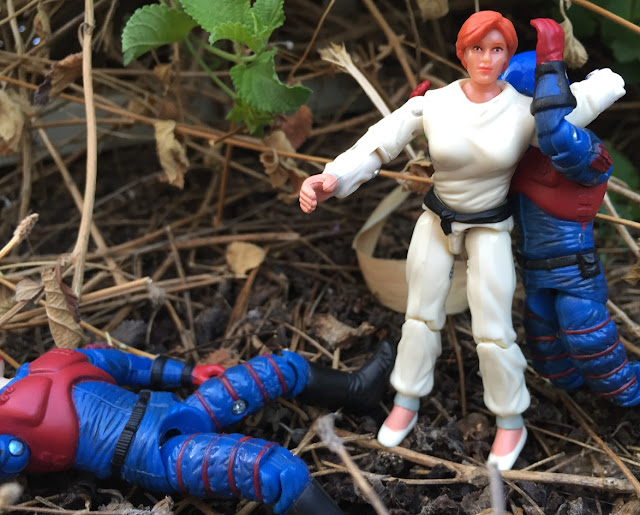 Posted by Robot_Sonic at 1:02 AM
Email ThisBlogThis!Share to TwitterShare to FacebookShare to Pinterest
Labels: 2004, Comic Pack, Scarlett