The original 13 Joes were an amazing example of how to create something new and exciting from very few base parts.  It was a formula that was tried by other, derivative toy lines many times in the 1980's.  But, as Joe had largely moved away from reusing parts save for rare instances after the initial wave of figures, these other lines appeared cheap.  But, Hasbro's original cost saving foray into 3 3/4 figures was nothing short of remarkable.  While the figures retain a uniqueness to each individual character, the overall team was still somewhat unified.  There was a cohesion that stood out from other retail offerings while still bringing characters that showcased the effort that Hasbro put into their product.

In the fall of 1982, my younger brother got at least 2 straight arm Stalker figures for his birthday.  I know that by new year's day of 1983, we had at least 3 of them in the house.  (Stalker was not, though, part of my 4 man Joe army of Clutch, Snake Eyes, Hawk and Breaker.)  I have a few memories of playing with the figures in the front yard of my parent's home.  But, nothing overly memorable other than finding a very dirty and broken figure behind a paving brick when my Dad re-landscaped the vegetation restrictions that lined the concrete stairs that divided the hill in the front yard at some point in the early 1990's.  In fact, I didn't think of Stalker all that much and his figure really wan't all that important to me.

But, in the summer of 1984, I began to read the Joe comic book.  Here, Stalker's prominence lead to a greater appreciation of the figure.  Not enough to get me to track down a new version, but to at least realize he was probably the third most important Joe behind Snake Eyes and Hawk.  In the summer of 1985, though, my desire for a Stalker figure was sparked.  The catalyst behind it was something that, on the surface was completely unrelated: my acquisition of the 1985 Snow Cat vehicle.  The Snow Cat should be unrelated to Stalker in general.  But, Frostbite, the driver of the vehicle, included a large, scoped rifle that immediately reminded me of Stalker's appearance in the LRRP flashbacks from issues 26 and 27 of the comic.  I now wanted a Stalker figure and he became a more important addition to my collection than the few 1985 figures I had yet to buy at retail.

Fortunately, the Snow Cat's entry into my life immediately preceded a two week stay at my grandparent's home.  My grandparents spoiled me rotten.  They were comfortably retired and we spent our days going to various retail stores to look for and buy me toys.  For some reason, this was something they only did with me.  My younger brothers rarely spent any time with my grandparents without me.  And, after my younger brother's first week alone with them, the entire practice stopped.  There were some odd family dynamics at play and my mother has been more forthcoming with them in recent years.  It was her opposition to the arrangement (and the fact that my grandparents were so over the top in their gift giving) that ultimately ended it.  Yet, now, she is repeating the behavior she so disliked with her own grandchildren.  Go figure.

I announced my desire to find a Stalker upon my arrival and my grandparents set out over the next few days to find me one.  Store after store, though, was completely devoid of the 1983 figures.  I'd spend copious amounts of time flipping through every figure in every row to see if Stalker was buried somewhere in the back.  (In those days, retail Joe displays were dozens or hundreds of figures, so it took a while to search at every store.  And, there were a lot more stores, too.  K Mart, Children's Palace, Best, Sears, Service Merchandise and even department stores all had huge toy departments with chances to find my unicorn.)  After several days, we had exhausted all avenues.  While I had pretty much completed my run of 1985 figures through these travels, I was still missing the one figure I wanted.  Near the end of my stay, my grandmother recalled seeing a large display of G.I. Joe toys at a local Kroger store.  I had never seen toys at the grocery, but she assured me she had.  We went to the out of the way Kroger.  In the back of the store, this particular location sold a variety of hard goods to supplement their grocery.  Among them was an entire wall of G.I. Joe figures.

These were not, though, the recently shipped cases of 1985 figures I found at all the standard retailers.  No, these were older stock.  Tons of 1983 and 1984 releases bulged from the pegs: cascading down onto a blanket on the floor.  I'm sure there were untold treasures in that pile.  But, I cared about one figure and one figure only: Stalker.  And, sure enough, he was in the mix.  I found him and bought him: my mission complete.  I recall the happiness of that moment still today because the figure was something I wanted and searched for.  The culmination of my effort (well, my grandparents' effort!) was tremendous satisfaction.  I got my Stalker back to their house, armed him Frostbite's rifle and an Airborne backpack from the 1984 Battle Gear set and promptly elevated Stalker to be among my most important figures.

For the remainder of the time that I played with toys, this Stalker was at the forefront.  He retained his popularity through 1986 and even into 1987: despite the massive influx of newly released characters.  I had acquired him late enough in 1985 that I took good care of the figure.  (It's odd that 1985 seemed the turning point.  My early year 1985 acquisitions got beat up and broken.  But, anything bought after the spring survived pretty well into my adult collection.)  Since he remained intact, he also remained a vital character who was on par with Flint in terms of importance.  At some point in the mid 1990's, though, I got the figure out to display.  When I put Frostbite's rifle in his hand, the fingers snapped off.  Not the commonly brittle thumb, but the rest of his hand.  It was a tough loss: but a testament to the good life the figure lived.

I've since added a new Stalker to my collection.  But, these days, he and the rest of the original 13 swivel arms lay in a felt lined drawer of an antique tool box my father gave me for Christmas almost 15 years ago.  Occasionally, I'll get a few of those originals out for a photo shoot.  But, those are increasingly rare.  I sense a general fragility with these older figures and don't want to push my luck would one drop into rocks or concrete.  Plus, most of the characters were redone in the late 1990's or early 2000's in designs that are good enough facsimiles of the originals to satisfy the photo requirements.  But, most days I'm in the Joe closet looking for something, I'll pull open the 1983 drawer and take a quick look at the 16 figures (I keep a swivel Cobra Trooper, Officer and Commander in there with the 13 Joes.) that pretty much started it all.  They are a reminder of why I still collect these toys so many years later.  The memories and emotions attached to them are as much a part of my reasons as the enjoyment of a product well designed.

While Stalker was a mainstay of the vintage Joe line, he didn't become so until 1989.  Stalker waited 7 years to be revisited, but then promptly saw a new figure in 1992, 1993 and 1994.  This version remaining the default helped to cement this look for Stalker.  It also helped him bridge the changes in construction and sculpting that occurred through the 1980's.  Stalker appears, to me, less out of character among later year figures.  This is likely just perception.  But, it is perception forged from the years of seeing him with newer characters in the comic.

But, Stalker's figure also had more depth.  He was the only original Joe to actually feature a cammo pattern.  So, while his body was shared with many other figures and the base color isn't too far from some of the other original figures, the dark green color streaks make the figure stand out.  Having a unique head distinguished him quite a bit.  Stalker's personal M-32 was also a way to distinguish him.  The weapon always felt more substantial than Grunt's M-16 and was my default go to weapon for my Clutch figure.  But, that was short lived and I came to view the M-32 as belonging only to Stalker and, to this day, can't see it in the hands of other, American figures.  (I'm more forgiving of TNT, though, just due to the overall oddity of the character.)

The Stalker mold was a world traveler.  The straight arm figure saw exclusive releases in Brazil, Mexico and Argentina.  (The mold was also repainted as a Caucasian for the Plastirama Manleh figure in Argentina, too.)  The swivel arm mold, though, also saw great use.  The figure was released in Japan, Australia and Europe.  Palitoy used it for the Action Force Jammer character and Funskool then released several Stalker variants for many years.  (Again, some were actually Caucasian.)  In 1997, Hasbro got the mold back from India and released the solid 1997 repaint.  Hasbro created a new head for the character in the 2004 Comic Book pack release and repainted it in more vintage colors the next year.  They then brought the head back on the high quality 2006 Lonzo Wilkinson figure.  Stalker was re-imagined multiple times in the vintage line, the new sculpt era and the anniversary style line, too.  So, there are ample ways to get the character.  But, this is the figure from which they all are derived and is, to me, the essential Stalker figure.

High quality swivel arm Stalker figures can be had for around $18.  You will see many dealers, however, offering them in the $30 range: with many selling.  Open market sales tend to be lower, but are less frequent than they used to be.  Considering the figure's high quality and the character's importance to the line, he's worth the money.  Sure, you can get some later Stalker versions for much cheaper.  (And, the 1997 version is probably a better overall figure.)  But the original Stalker is too important to the line's legacy to be left out of any collection.  Stalker's value as a character and a toy design are essential parts of line's endurance and should be part of every collection. 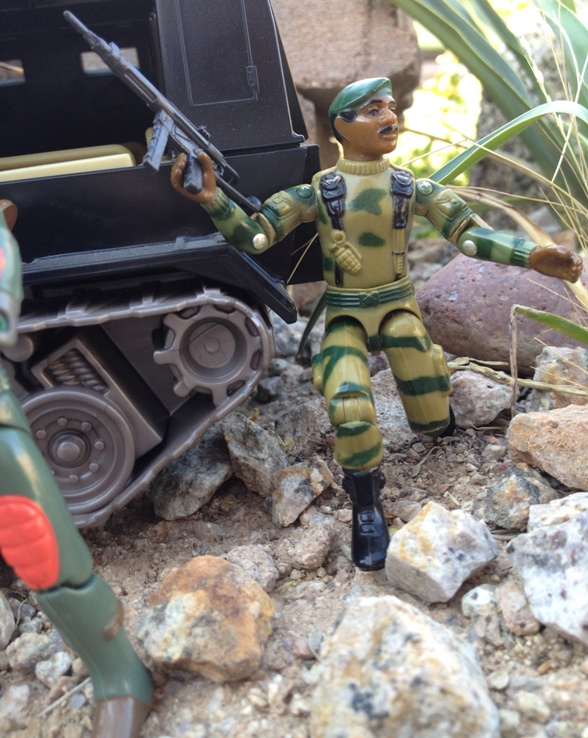 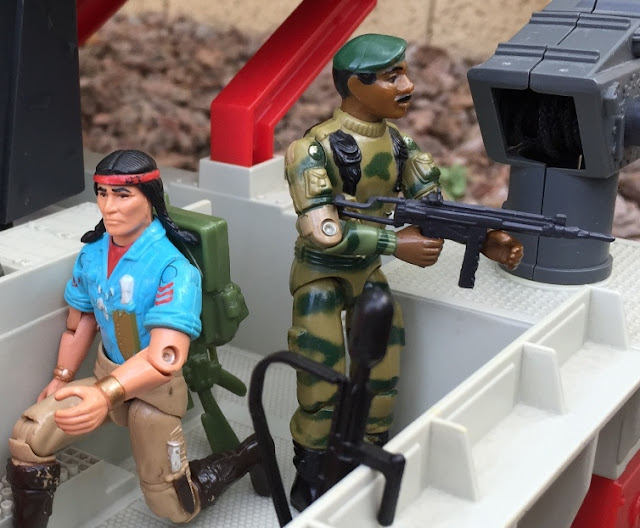 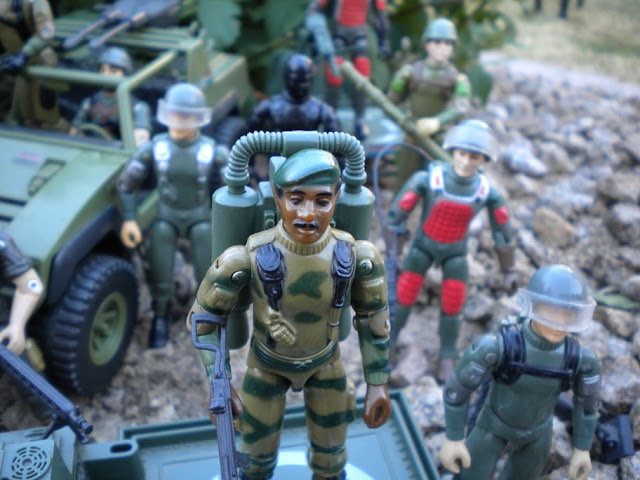 Posted by Robot_Sonic at 2:14 AM
Email ThisBlogThis!Share to TwitterShare to FacebookShare to Pinterest
Labels: 1983, Original 13, Stalker