Back in the summer of 2000, the first lists and photos of brand new, retail Joe toys started to circulate.  At the time, everyone was pretty much excited about each and every release.  As the hype died down and I had more time to digest the full list, there were certain items on it that appealed to me more than others.  One of the items that was highest on my list was the fact that Hasbro would be releasing a new Lamprey figure.  The 1985 Lamprey had long been a personal favorite and he was one figure that I really, really wanted to army build when I was a kid.  But, I was out of Joe by the time that he became a staple of the mail away premium.  So, my childhood dreams had to be fulfilled by the adult collector.  A collector who, by early 2000, had managed to acquire an impressive for the time amount of original Lamprey figures.  So, seeing the figure would return prompted me to assume that I would quickly amass quite a few of these figures and build an impressive force of Cobra naval troops.

In October of 2000, the first reports of collectors finding the newly released vehicles began to appear on the G.I. Joe Usenet group and the PIT mailing list.  On a Sunday afternoon, I decided to head over the nearest Toys R Us store and try my luck.  I was rewarded when I found several of the new Man O War subs on the shelf: each including a Lamprey.  I snatched one up, took it home and opened it.  I discovered that the Lamprey figure was what I wanted from the character.  I was disappointed, though, that he did not include his vintage rifle.  But, after not seeing Joes at retail for nearly two years, this figure was a shot of enthusiasm.  Unfortunately, the Man O War was not.  To paraphrase Homer Simpson, the Man O War is the suckiest ball of suck that ever sucked.  It's just terrible.  It's small, had no play value, will not stand up on it's own and displays terribly.  It may be one of the single worst G.I. Joe toys ever released.  Why this was chosen over any number of other vehicles makes no sense.  But, for around $7, I felt somewhat ripped off.

This feeling, of course, was compounded by the fact that vintage Lamprey figures were still cheap.  In the late spring of 1999, huge amounts of mint in bag Lampreys were discovered in the Hasbro Canada find.  I, personally, got three or four of them as fill ins for other figures I had ordered who were sold out.  The overstock was readily available on Ebay and you could easily buy up bagged Lamprey figures for around $3 without really trying.  If you were willing to buy in lots, you could get them even cheaper.  As such, you could get two mint and complete 1985 Lampreys for about the same as you'd spend to get a Man O War and a new, weaponless, Lamprey at retail.  The Man O Wars were completely worthless (you can't give them away to this day!) so the full retail cost was associated with acquiring the figure.  With scads of 2 figure packs available for 5.84 at Wal Mart, my retail money was quickly focused on those and the original Man O War and Lamprey was the only one I ever purchased.

In 2001, Big Lots did get overstock Man O War sets that they sold for a discount.  This got a few people to pick up extras as the price of vintage Lampreys had risen a bit in the prior year as the army builder craze began to take hold.  But, superfluous 2000 Lamprey figures remained somewhat scarce on the aftermarket unless you were willing to buy boxed Man O Wars.  That changed in the mid 2000's, though, when Asian G.I. Joe sellers began to offer large quantities of 2000-2004 army builders for very low prices.  The catch was that you had to ship from Asia, which added a great deal to the cost.  However, these same sellers were often also the ones selling the alternate, unproduced figures from the Toys R Us and other exclusive sets.  As such, it became economical to buy some of these higher priced rarities and then add in a few $1 or $2 army builders since the shipping was, basically, the same.  The result was that a lot of Lamprey figures were imported into the hands of collectors and the figure became much more available.  I took this route and acquired a few of these figures from Asia.  Simultaneously, as the prices fell, it became easier to find extra figures for sale from domestic collectors who were looking to downsize.  With this phenomena, I was able to acquire a few more of the 2000 Lampreys and add them to my forces.

With them in hand, though, the limitations and highlights of the figure became more prominent.  On the plus side, the 2000 Lamprey is a perfect paint match for the 2001 Sub Viper and the 2000 Undertow.  Paired together, they make for a great Moray crew that retains the uniform coloring, but offers some breakups in the molds used.  On the down side, the figure isn't that strong as the color palettes are left to plastic rather than paint and you get some awkward joints on the figure that make him seem cheap.  The other thing about the figure's look was the paint wipes.  Paint wipes were controversial in 2000.  Hasbro had created the concept in their Star Wars line where they used paint to simulate weathering and age.  The results in that line were mixed.  On the Joes, though, it was a rough road.  The earliest waves were heavy on paint wipes and not in a good way.  The black paint to showcase details looked like oil and it appeared that the Lamprey had been cleaning penguins after the Exxon Valdez.  In later production runs, Hasbro would lighten up on paint wipe applications.  But, the did detract from the shiny, spit polished look of the 1985 figure.

Still, this isn't a bad figure.  He meshes with the 1985 version and looks good at any station on the Moray.  For me, Lampreys are the backbone of the Cobra naval forces.  This is in stark contrast to their filecards where Lampreys are elite Eels, culled form those ranks and further refined.  Cobra filecards always made each character out to be the elite of the elite or best of the best.  It was a mandate to make the villain seem dangerous.  But, the world needs grunts, too.  And, the Lamprey was too cool of a figure to make a super elite trooper.  Cobra needs maritime forces to guard coastlines, man ships and even commandeer wayward vessels.  Eels would be wasted on such duties.  And, Eels need a base from which to be pulled.  The Lamprey fills that need nicely.  I use the 1985's as the standard commandos while this 2000 version forms the basis of my Moray crew.  The different uniform and lack of gun denotes their specialty versus the common ground troopers.  With this role change, I get to use Lampreys more often and in more settings.  I can also justify having far more of them than I do Eel figures.

The Lamprey mold was used 4 times.  The original 1985 figure is far and away the best use.  In 1990, the figure was painted bright orange and released in the Super Sonic Fighters line.  The figure's weapons were good, but the fig is a '90's kind of terrible.  It's found some popularity due to the horridness and has a bit of a collector following.  But, it's not a great look for the Lamprey.  This figure was released in 2000.  Hasbro used the mold again in 2003 for the Python Patrol Lamprey.  He was a solid choice for the set and the figure is decent.  Aside from that, the figure's legs appear on the infamous Chinese Major Bludd and also appear on the unnamed 1995 Figure.  (Though, that may be convenience rather than planned construction based on drawings of the figure.)  Hasbro could have done a lot with the Lamprey.  But, the later Moray releases were all for Joe rather than Cobra and there weren't many other slots for the figure to fit.  A white version based on his first appearance in #40 of the Marvel comic would have been awesome.  And, a version that matched the coloring of the Eel would have been another no-brainer repaint.  But, those didn't happen.  To me, the original Lamprey is just about perfect.  This 2000 version is decent, but doesn't do anything you can't get from the original.  The other versions are one off, fun releases that serve as conversation starters, but nothing around which you build a Cobra army.  The mold has untapped potential.  But, it will never come to be now.

These days, the figure isn't as available as he was in the 2000's.  Dealers sell him in the $7 range.  Due to low supply, they seem to sell at that price, too.  (Though they will sit at $10.)  If you can find a collector selling the figure, you can get it a lot cheaper.  You will find lots of the figure that are leftover Asia stock, too.  And, those can be a great way to pick up quite a few for a low average cost per figure.  It will take you a bit of time to find loose figures at open market pricing: mainly due to the low value of the figure.  Though, if you ask around, you may find people who will sell you a figure or two just because you have the interest.  But, if you really want Lamprey figures, just spend $5 to buy loose, incomplete vintage figures.  They are easier to find, better quality and more readily available.

Personally, I don't understand the Lamprey's lack of popularity.  I've always felt it was a great figure and Cobra would have a need for naval commandos.  But, the fact that the collecting community doesn't agree with me has left all his versions as fairly cheap acquisitions.  That, I do like.  While I'd have loved for Hasbro to have better utilized this mold in the 2000's, the enduring lack of popularity of it's actual uses shows their decision to ignore it after 2003 looks smart.  For the modern collector, the Lamprey remains a cheap army building target and this 2000 version is a great way to add some ranks or specialties within their legions. 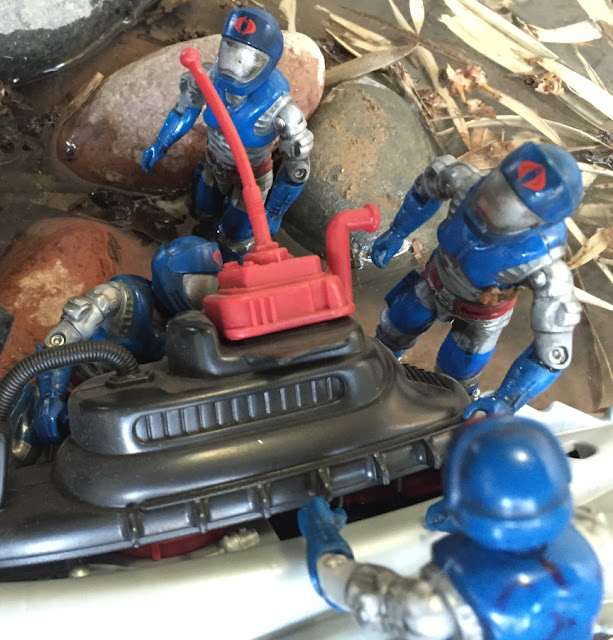 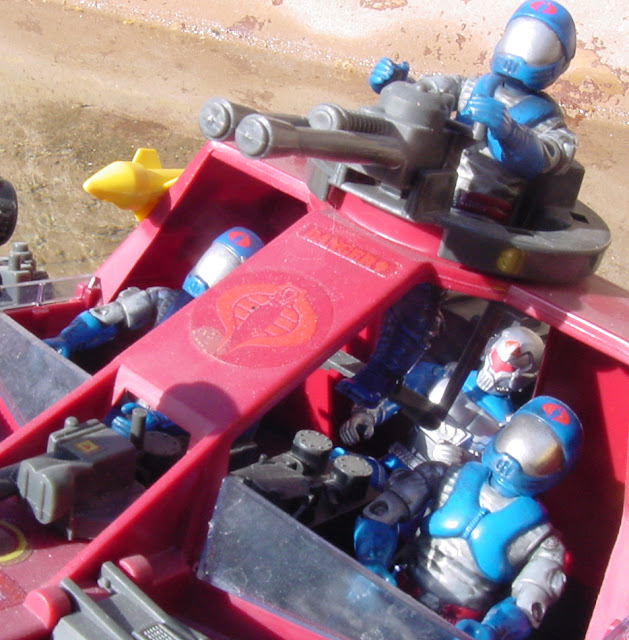 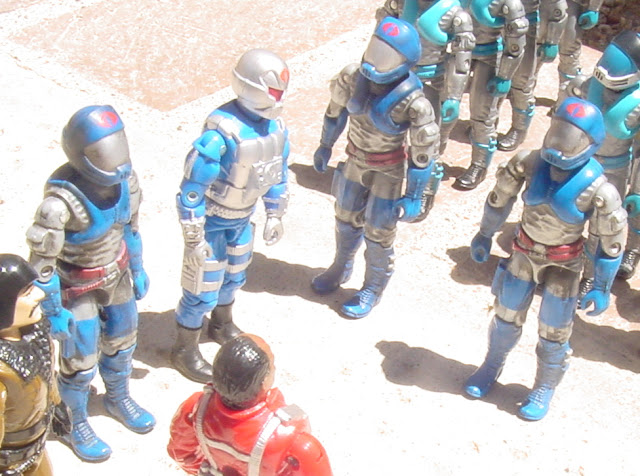 Posted by Robot_Sonic at 3:43 AM
Email ThisBlogThis!Share to TwitterShare to FacebookShare to Pinterest
Labels: 2000, ARAHC, Lamprey, Vehicle Drivers