In the first part of 1986, I was on a hell bent crusade to find all of the newly released Joes at retail.  In fairly short order, I had most of the new releases.  But, as with prior years, there were a few figures who eluded me.  As spring turned to summer, though, I wrapped up my new figure quest.  Among the last figures I acquired was the 1986 Iceberg figure.  You may wonder what a kid is to do with an arctic figure in the summertime.  I certainly did.  While I had plans for him when winter finally came around, acquiring him in the summer ended up defining the Iceberg character for me in a completely different way than any of his media.

In the summer of 1986, I found refuge from the heat in my parents' basement.  My mother was loathe to use air conditioning unless the temperature was above 90 degrees.  So, on the humid days where the mercury didn't climb that high, I found the basement was substantially cooler than the rest of the house.  At that time, we had a large room at the bottom of the basement stairs.  The stairs served as a de facto separator where the right side was for my father's model train setup and the left side housed an air hockey tables that, mostly, was covered with camping gear that didn't fit into the small "incinerator" room that had once housed the coal stove used to heat the home in a bygone era.  Filling the alcove created by the small incinerator room was a custom built bar.  It was beautifully designed with high quality wood.  It had a swinging door by which you entered it.  But, the bartop itself was hinged so that it could fold over the door, locking the bartender behind it and anyone else on the outside.  It had been a great play feature with my brothers for years and there was always at least one toy pistol hidden inside one of the drawers on the backside of the bar itself.

It was this bar, though, that became the focal point of my summertime refuge.  It became a Cobra fortress.  A fortress the Joes had to siege and capture.  I laid out all of my Joe toys on the rug in front of the bar.  There, for weeks, various story lines played out where the Joes tried to destroy the fort and Cobra along with it.  In this large scale battle, different toys came into play.  I had a high quality Snow Cat from 1985.  And, despite the fortress not being the arctic, the Snow Cat's weaponry was badly needed by the Joes.  This lead to Frostbite getting a promotion as I saw him as a strategic commander in this operation.  When I added Iceberg to my collection that summer, his natural fit was in the second seat of the Snow Cat.  (My Snow Job figure had long died a broken thumb and crotch death.)  From there, Iceberg was elevated to Frostbite's second in command and became one of the higher ranking Joes who conferred directly with Hawk, Flint and other custom members of my G.I. Joe command.

In this role, Iceberg became someone who was not a combatant, but a strategist.  He rarely saw combat and almost never left the cockpit of the Snow Cat.  His large rifle played into his character.  I had it as a very rare, high powered rifle that was the only small arms weapon capable of hitting a Cobra on top of the fortress from the ground.  Not even Low Light's sniper matched his range.  (Later, I took this concept further and even gave Iceberg's gun a name.  Smugglers and criminals would attempt to steal the weapon due to it's potency.  Laws were enacted specifically to punish anyone in possession or Iceberg's rifle and I had elaborate stories of bands of scofflaws stealing the weapon and then attempting to escape capture while in possession of the contraband weapon.)  With that, Iceberg's character became cemented as something completely different than I had originally planned.  When winter rolled around, Iceberg still never left his Snow Cat.  I have no specific memories of taking Iceberg out into the snow and ice.

But, in his advisory role, Iceberg never blossomed into a warrior.  He was a thinker who would pull out his rifle for specific purposes, infantry missions not being one of them.  In this role, I began to think of Iceberg as older than the average Joe and pretty much out of combat age.  As such, he didn't get much use.  Politically, he was well connected and would often appear in the command center of bases.  But, I never really used him in the vast majority of my adventures which often either involved small teams of Joes escaping masses of Cobras or the full Joe team repelling a full on Cobra assault.  With that, Iceberg fell into obscurity and never attained the popularity of some of his contemporaries.

As a collector, I had a decent Iceberg left from childhood.  He went into the Snow Cat on display and stayed there for many years.  At some point, I realized that the figure needed an upgrade.  So, I actually went without an Iceberg for a while.  I didn't miss him.  In looking at the figure now, the mold is well designed and the colors match for arctic conditions.  There's no reason why he didn't become useful to me other than the fact that he entered my collection in the summer and found a niche that superseded his arctic proclivities.

Iceberg's sculpting is good.  His hat is part of his head and not removable, but this wasn't much of an issue as the first removable headgear arctic figure would not appear until Blizzard donned the shelves in 1988.  The chest mold is good.  The shoulder holster and grenades are well done.  The fur collar somewhat limits the figure's parts usage in customs, though I still think it would have a better Comic Pack Clutch in 2004 than Mace did.  But, the figure gets bland after this.  His legs are just, basically, white with just a knife molded to one.  The big knock against Iceberg is his lone accessory: the large rifle.  It is, in and of itself, just fine.  However, most 1986 Joes included an ample supply of gear.  Even those who only included a gun and pack had well detailed packs that gave the figure a bit more heft.  Plus, Snow Job had included about the best complement of accessories for any figure up through 1986.  Getting the same amount of gear with the carded Iceberg as you got with the vehicle driving Frostbite was very disappointing.

Iceberg has a decent history.  He was released in the U.S. in 1986 and 1987.  He then reappeared as mail away and convention premiums in the early 1990's.  But, these may have been overstock from the '80's rather than new production.  In the mid 1990's, Iceberg was shuffled off to India.  There, Funskool produced a panoply of Iceberg variants for both India and Egypt (under the Nilco brand name).  The first Iceberg figures were nearly identical to the U.S. figure.  But, Funskool then changed Iceberg's race and released a Caucasian Iceberg figure.  This skin color was released in several different color schemes, many involving pink and red.  Funskool Icebergs are among the most fun foreign variants to collect because there are so many and so many of them are just bizarre.  In 1997, Hasbro got the mold back and released the 1997 Iceberg figure.  Oddly, though, that ended the mold's appearances.  Despite the parts lending themselves to many repaints and Hasbro producing a plethora of winter themed figure and vehicle exclusives, Iceberg never made it back to retail.  It's too bad as more could have been done with the mold.  The fact that he appeared in 1997 also proved that Hasbro had access to him.  So, his absence is one of those great mysteries of the 2000's.

Iceberg figures are very prone to discoloration.  Dirt, finger oil and sunlight are all natural enemies of white plastic on action figures.  As such, finding a truly mint Iceberg can take some doing.  But, he was introduced during the height of Joe's popularity and was produced in more than ample numbers.  Dealers will price mint and complete with filecard Icebergs in the $8-$10 range.  The general market is even more lenient on pricing.  While you do find lots of discolored figures in the lower price ranges, you can also find mint and complete Icebergs that are gem white for under $5.  For those prices, there is no excuse as to why someone would not have an Iceberg in their collection.  The abundance of winter gear that was available in the 2000's makes it easy to outfit Iceberg in better accessories and makes him that much more desirable.  Iceberg no longer holds the place of importance that he once did in my collection.  But, he's among the solid second tier of figures who fill valuable specialties with the Joe mythos and who make the Joe line as spectacular as it is. 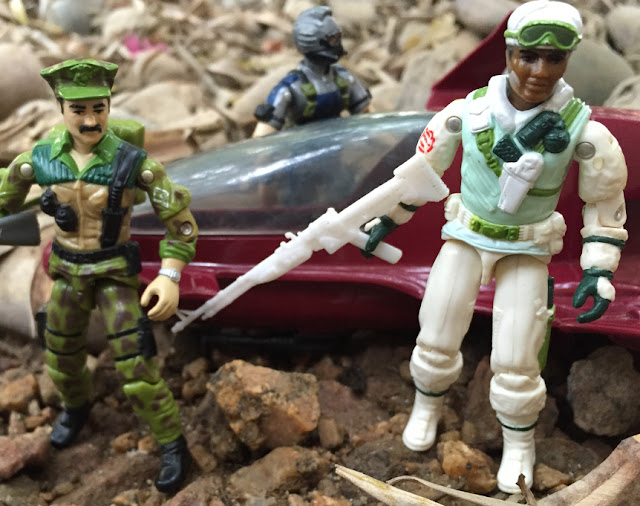 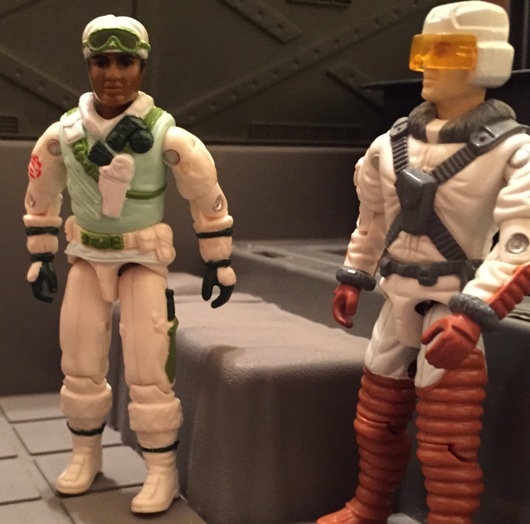 Posted by Robot_Sonic at 2:45 AM
Email ThisBlogThis!Share to TwitterShare to FacebookShare to Pinterest
Labels: 1986, Iceberg