As 2005 began, I was not too into Star Wars.  I had lost much of my enthusiasm for the franchise with "Attack of the Clones" and had immersed myself into the massive amount of Joe retail product that Hasbro released between 2002 and 2004.  But, as the year started, I found myself getting interested in the upcoming "Revenge of the Sith".  I read online spoilers.  I paid attention to the toys.  I watched the "Clone Wars" cartoon series in its entirety.  I even went so far as to read the novel ahead of the movie.  In short, I was excited for the film and was completely satisfied with how it unwound.  I found it a vindication that helped ease the disappointment of the prior two films and also rekindled my interest in the toys.

That summer, I bought a couple figures which were the first Star Wars toys I had bought since 2001.  They happened to be mostly super articulated figures, though, and this new quality coupled with the movie's solid release sent me into Star Wars acquisition that I had not experienced for quite a while.  Not all of the first 40 or so "Revenge of the Sith" figures were good.  But, many were.  One that really garnered my attention, though, was the Clone Commander.  He reminded me of the Arc Troopers I had seen in the "Clone Wars" and didn't match any appearance of a Clone onscreen.  I picked up the initial, red, version and planned him as a commander for any Shock Troopers that would, surely, be released.  That fall, though, the unexpected popularity of the "Revenge of the Sith" figures lead Hasbro to slap together some hasty repaints of recently released molds to capture more money while they prepped the 2006 line.  In these was a Clone Commander, repainted with green highlights.  And, that is the figure I'm reviewing today.

Supposedly, the Clone Commander design was based on Commander Bly, who was assigned to Aayla Secura in Revenge of the Sith.  Bly's design is a dead ringer for this figure, only he has yellow highlights.  The story at the time was the Hasbro created the initial, red figure from early drawings of Bly who was later changed to yellow onscreen.  The upside was that Hasbro released a cool looking figure.  The downside was that he was, basically, an EU character since he had yet to appear onscreen.  But, with this figure being released as a generic "Commander" character, that also freed Hasbro up to repaint it.  The green version is just as EU as the red version and was a way for Hasbro to get a highly popular mold out into the market for both collectors and kids in time for the 2005 holiday shopping season.

I wasn't too keen on the Clone Trooper origins and designs from Episode II.  Seeing color added to the troops seemed like a cheap play to sell more toys.  (It likely was.)  I didn't think the colors really added much to the designs and that the white and black versions that were closer to Stormtroopers were more in line with what I wanted to see.  This stance softened by Episode III.  Seeing the clones in action in the Clone Wars cartoon had made them cooler to me.  And, the updated Episode III versions that were closer to Stormtroopers were much more interesting.  The one thing I did like about this figure was the added gear.  Aside from the Stormtrooper inspired look, the Clone Commander featured  hinged binoculars (very 1983 Steeler!) and a kama with two working holsters.  He also has a shoulder pauldron and bandolier.  In short, he's decked out in gear that greatly enhances his look and cements his status as something more special than a rank and file Clone Trooper.  He includes the two pistols for his holster and the standard Clone Trooper rifle.  He also included a zip line accessory that could be used with the Republic Gun Ship.

For a 2005 figure, this Clone Commander is well articulated.  But, he's not super articulated.  This was less of an issue when he was released.  But, the body now exists in far better sculpted and articulated releases.  As such, despite the fact that this figure was excellent upon his release, he is actually pretty dated now.  The forearms and hands are awkward and can make posing a challenge.  The figure's hips are not as articulated as they could be.  More than a decade after his release, the figure is good enough, but there are better versions out there.  But, for a collector type figure, good enough is really all I ask for.  I have a couple of later versions that have better articulation and slightly different accessory configurations.  But, none have captured my attention like this figure has.

Disney has released a Star Wars movie in both 2015 and 2016.  Accompanying them was a full array of toys and merchandise.  However, Disney is not as tied to the legacy of 3 3/4" figures as their flagship product.  As such, while you do see a lot of figures hanging on the pegs now, the modern displays pale in comparison to what you could find for Episode I, II or III.  Stores had the majority of an aisle dedicated to the small figures and they were produced in astronomical numbers.  Despite that, though, several popular molds were actually hard to find.  The one thing those molds had in common was that they were based on Clones.  I only saw a #6 Clone Trooper a couple of time.  The super articulated #41 Clone Trooper was even scarcer to come by.  I found maybe a couple of the red Clone Commander figures: and those were always when I hit the local Wal Mart after I figured out the day and time they stocked figures.

While both Episode I and Episode II figures had, eventually, found their way to clearance bins, Revenge of the Sith figures continued to sell strongly: even after the movie was long out of theatres.  The success of the line caught Hasbro off guard and they didn't have any more figures planned for 2005 after the final lines of the Ep III figures were released in the summer.  So, they hastily repainted a few molds and re-released a few favorites to fill store shelves for Christmas.  But, the repaint waves were also hard to find.  If a case hit, eager parents were just as likely to buy it up as were collectors.  You could find the figures if you bought like a collector.  But, casual trips to the store would almost always result in failure.  The most sought after repaint was the #6 Clone done in Shock Trooper colors.  But, this green Clone Commander was close behind.

My one great compliment of modern Star Wars figures is that they are now everything I wanted as a kid.  I wanted lots and lots of removable lightsabers.  I wanted working holsters with cool guns.  I wanted figures with more posability.  I wanted obscure aliens, bounty hunters and more Rebels beyond the main heroes.  I wanted cloth goods and removable gear that you could interchange with other figures.  Hasbro has delivered on all of those.  They have moved away from much of this with the Disney movie figures.  But, Hasbro produced thousands and thousands of figures prior to 2015 and does continue to make a small number of super articulated figures in the overly expensive Black Series.  But, most of these high quality figures from prior years are very affordable.  As my kids are starting to move into the age where they can play with Star Wars figures, I'm less inclined to spend money on retail releases and, instead, go back and buy up cheap lots of figures from 10 or more years ago.  The characters are mostly the same aside from the new movies.  And, my kids won't care they don't have the "best" Boba Fett in the rarest packaging.  They'll be content with any of the tons of cheap Fetts that you can get.

Like most Star Wars figures of his era, this figure is basically worth less then retail today.  Carded versions can be acquired for $5 or so.  Loose, mint and complete figures can be tougher to find, but will still sell for under $5 most of the time.  So, if you spent $6 to get this guy a decade ago, you've lost money.  But, that's OK.  In the end, the purpose of toys like this is the enjoyment you get from them.  This figure was re-released in various cardbacks and the general Clone Commander style now exists in many different forms that beat this one.  This leaves the Clone Commander as a cheap way to get a good figure, either for a collection or for your kids. 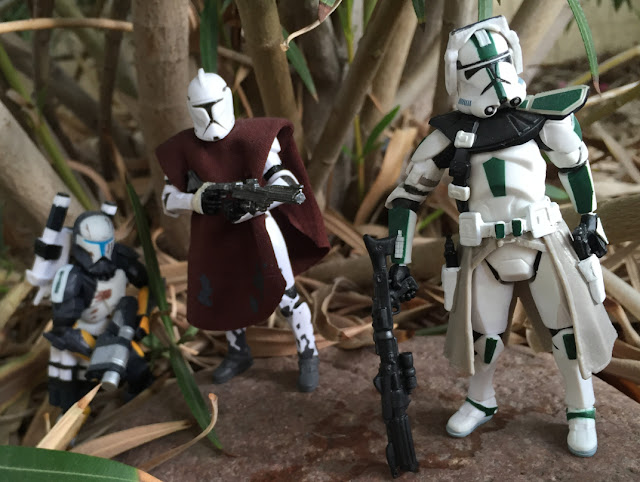 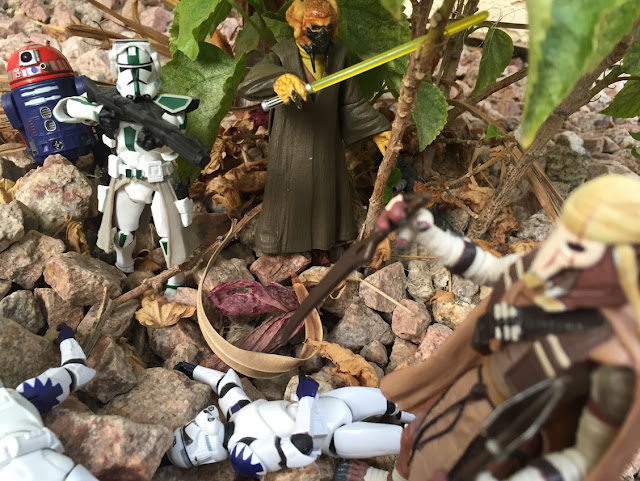 Posted by Robot_Sonic at 4:22 AM
Email ThisBlogThis!Share to TwitterShare to FacebookShare to Pinterest
Labels: 2005, Clone Commander, Features, Star Wars