In early 1999, I worked for a start up insurance company.  One of the perks was that I was the entire IT department at the time.  For those old enough to remember, 1999 was still the age of dial up for most internet users.  Lots of people had access to higher speeds at work, but were limited in their browsing habits.  In the spring of that year, someone posted the first clips of the animated portion of the infamous Star Wars Holiday Special.  At the time, the Holiday Special was kind of a unicorn which was traded via copied VHS tapes.  There was no YouTube and video on the internet was small and difficult to download.  The clips were broken into small file sizes so that they were easier for dial up customers to get.  A few friends of mine were desperate to see the clips and set out downloading them.  I was able, though, to get all the clips at work through the high speed internet.  I then burned them onto a CD and mailed them to those friends: allowing them to get the quicker than trying to download themselves.  How far we've come.

The Star Wars Holiday Special is terrible.  Really, it's not even one of those things that's so bad it's good.  It's just awful.  (I remember my parents rushing us out of the mall that night, though, so we could get home to watch it.)  But, the animated cartoon brought about several cool things.  The best, though, was the debut of Boba Fett.  He was still a mysterious bad ass.  But, his appearance was drastically different than what we would see in "The Empire Strikes Back" because he, you know, did something.

The animation for the cartoon is not good.  And, the story isn't much better.  But, the real value is the hint at the story between the stories.  You know that several years passed after "A New Hope" before Empire.  In those years, Luke Skywalker was not a Jedi nor really understood the force.  He obviously had some self discovered capabilities.  But, he was still that 19 year old kid who had just left Tatooine.  As such, I've always imaged that he, Han and Chewbacca would have had some interesting adventures in the intervening years.  Seeing Luke in his ceremonial outfit in the cartoon is cool and helps foster the notion that he likely spent some years emulating Han Solo's approach to life rather than that of a Jedi.  I think there's fertile ground for storytelling here.  And, the fact that you could bring in characters like Boba Fett who were contemporaries, but not really utilized in the original trilogy just adds to the potential.

The figure itself is pretty solid.  There are a full 14 points of articulation.  While not quite "super articulated" as some figures of the era were, he's pretty close.  The figure is, at its core, a repaint of the 2004 Vintage Collection Boba Fett figure, so you expect some high quality design based on the high price point figure that comprises his base.  Hasbro created new forearms for this figure as well as a new waist.  The arms, though, have a limitation.  The molded plastic hoses that connect from the elbow to the forearm are too short.  They hinder some movements of the arm and make it impossible to pose the figure drawing the pistol from his holster on his waist.  It is the waist that makes the figure, though, since he now sports a nifty holster to hold his animated style pistol.  He completed with the a forked staff that shot powerful energy in the cartoon.  It looks decent enough and is a fun homage to a forgotten element of Star Wars lore.

If you look at the colors of this Fett, you can see stylistic similarities to Jango Fett.  As this character debuted decades before Jango's creation, it's possible that these colors were a basis for Jango's appearance.  Or, it could be coincidence.  Like most Star Wars characters, we'd expect an evolution of Fett's appearance.  However, having it change so drastically in such a short time is likely just due to the concept not being finalized when the animation was done.  We know the early concepts of Boba Fett were in all white armor.  This version has paler colors.  The final, film version was more brightly colored and detailed.  Having toys of different eras of Boba Fett is fun and keeps the character fresher than just getting the same colors in different poses.

I've never really been able to wrap my brain around why Lucasfilm never pursued animation as a viable story telling avenue.  The late 1970's were the heyday of Saturday morning cartoons and a Star Wars themed entry would have likely been hugely popular in an era where the only non movie year media most people had access to were the Kenner toys.  It seems like a large misfire on Lucas' part.  Though, to be fair, the company wasn't as large then as they would be by the time "Return of the Jedi" was released.  So, they may not have had the resources to handle both production of new films and an animation division.  But, I can't help but feel that my childhood would have been much better had their been Star Wars cartoons available every Saturday morning.

Like most Star Wars figures of this era, Boba Fett isn't worth much more than retail.  You can get carded figures quite easily for under $12.  Dealers will often charge twice that amount for impatient buyers.  But, the figure is readily available for cheaper.  Considering the figure is now 10 years old and cost $7 at retail, that's not much of a mark up.  The figure was re-released in a Droid Factory two pack as a Wal Mart exclusive in 2009.  That release seems a bit harder to find, but the figure appears to, basically, be the same.  Back in 2007, the 30th Anniversary Collection figures were heavily shipped.  Local stores had pegs and pegs of them, with Wal Mart actually having both a preponderance of an aisle dedicated to figures as well as an entire endcap.  Figures from all waves sold briskly and stock was replenished often.  This figure tended to be among the first sell outs from restocks.  But, he was certainly not hard to find and was readily available to anyone who looked for him even casually. 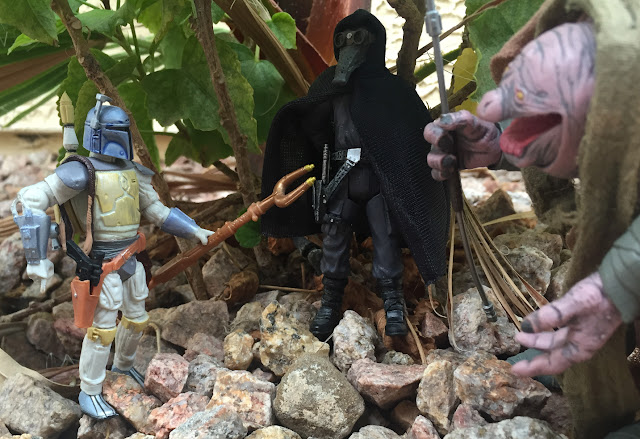 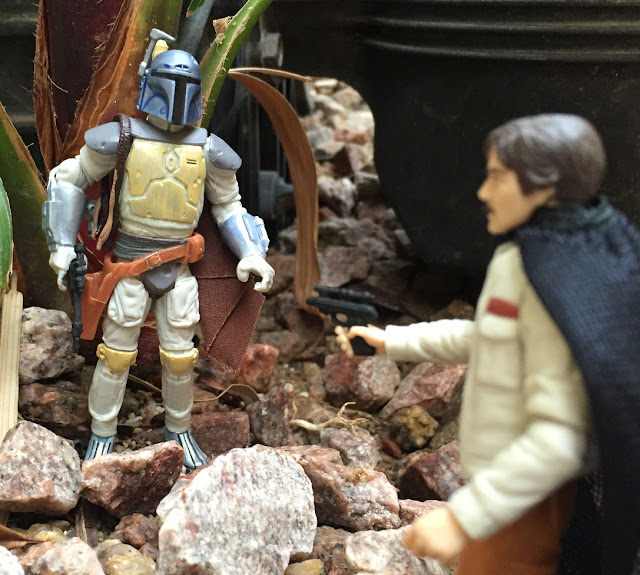 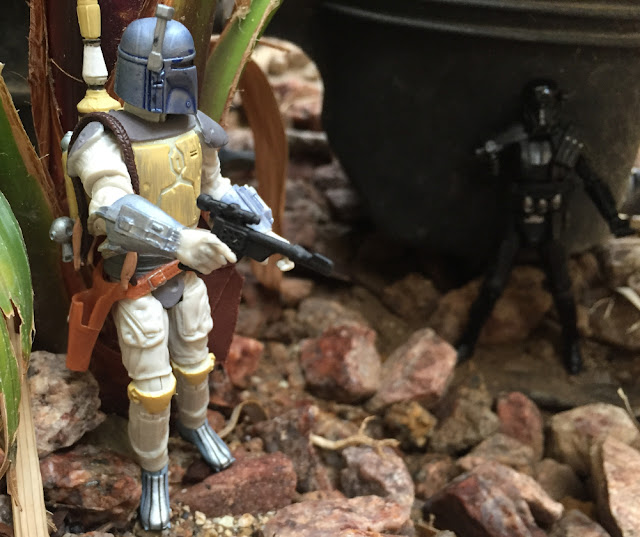 Posted by Robot_Sonic at 4:18 AM
Email ThisBlogThis!Share to TwitterShare to FacebookShare to Pinterest
Labels: 2007, Boba Fett, Star Wars