Over Christmas break in 1992, I spent my lunch hour away from washing dishes in a local deli going to Toys R Us.  It was the first time in a few years I actually went with the intention of buying some G.I. Joe figures.  I had my first semester of college under my belt and didn't really worry about what anyone would think of an 18 year old buying some action figures.  At that time, G.I. Joe still commandeered huge amounts of shelf space for both figures and vehicles.  I was faced with a wall of figures: with whom most of which I was unfamiliar.  In the overwhelming sea of new figures, I chose two recognizable names for my collection: Destro and General Flagg.

The General Flagg figure I picked up, though, was the brown coated 1992 version.  It was not until more than a decade later that I added this 1993 version to my collection.  During my searches for the remnants of the G.I. Joe line at retail in 1995 through 1997, I found a couple of 1992 General Flagg figures.  I never, though, found a 1993 version.  I had found enough of the 1993 repaints to be watchful for any figure variations.  But, certain figures were very hard to find at retail after the line's demise.  This General Flagg was among them.  So, he was a much later, after market acquisition for me.

The only real change to the figure is the black coat.  Frankly, I like the contrast a little better.  The grey details and gloves are a little extra that put the figure over the top.  Surprisingly, grey was not a color that was often utilized in the vintage line.  So, it's appearance on Flagg's upper body gives him a more distinguished look.  The black jacket is very reminiscent of the 1986 Hawk's first appearance in the comic.  He had a black jacket that would have made for a great repaint in the 2000's.  The contrast against the figure's green pants is nicely done and he looks the part of military commander without being either too grounded in realism or too far out there.  The fur lined coat does give him an arctic vibe and would have made for a solid snow Joe amalgamation.  The fur color is well done and you can almost feel the itchy material against your skin when you look at this Flagg.

Flagg's accessories are top notch.  His gun was one the primary reasons I bought the original figure in 1992.  It is heavily detailed and the perfect blend of small and large scale.  He also features a removable hat.  I really like this accessory.  And it's perfect for the 1992 figure.  The downside is that the black coat 1993 figure also includes the same brown hat as the 1992 figure.  The hat is a perfect match for the brown figure.  But, looks out of place on the black coat figure as there is no other brown on the mold to which it can match.  The missile launcher is the standard ridiculousness that was common in 1992.  But, at least it works.  The rubber bands are easy to break and do dry out with age if not stored properly, though.

In my youth, I created a second G.I. Joe team.  They were a competing group with Joe for the top assignments.  The faction was made solely of custom figures that I cobbled together from broken Joe figures that had been replaced.  Joe was given Cobra as an enemy and the other group faded away a bit.  In 1986, though, the group was ambushed in the Rockies and all but a few members were killed.  This character was represented by a custom I put together using Ripcord's head, Duke's chest and various arms and legs that weren't broken.  I gave him an Accessory Pack Ripcord helmet that was painted blue with white trim.  It was also badly chipped, which was part of his character.  This figure worked fine for when I was a kid.  But, I wanted a figure who could adequately represent the character for me that wasn't a Testor's covered amalgamation of badly worn and play damaged parts.

Enter this version of General Flagg.  I never got behind the use of this character as General Flagg's son.  The math just didn't work.  (Flagg was a young general who died in 1983.  Even if "young" meant 50, which is doubtful, it's unlikely that he would have a son who attained the rank of general by 1992.)  For some reason, I can accept pain sharing twins and super powered ninja commandos, but not a slight age discrepancy among some characters.  So, this figure was a prime candidate to be retconned into a different character altogether.

In this capacity, General Flagg saw some use.  I still had an occasional adventure back in 1992 and 1993.  Flagg was paramount to these missions.  He was now in charge of the Joe team with Hawk's retirement.  He lead the team through some rough years where Cobra was able to beat them due to the constraints put on the Joes by bureaucrats.  He was nearly killed on one of the missions and was forced out of active combat duty.  But, he still remained in command of the Joe team and lead them on more international missions using his foreign contacts.  He remains the nominal head of my Joe team.  But, he really only appears in photos with his contemporaries these days.

The General Flagg mold got a good amount of use.  Aside from the original figure in 1992 and this 1993 repaint, the chest and arms were used for the exceptional Chinese Major Bludd around 1994.  The mold then reappeared around 1999 or 2000 in India where Funskool released their amazing General Flagg figure.  There are three versions of General Flagg for collectors to track down and all are well done.  He is a character of whom there is no bad version.  His mold's reuse for Major Bludd showed it's potential for repaints, though that angle was unexplored.  Flagg was not among the figures that Funskool produced in their final run of figures in 2009 or 2010.  So, it's possible they returned the mold to Hasbro who then, likely, destroyed it without ever using it.  I can't say, though, that the character didn't get his due.  So, this is a rare case where I think that collectors really got the best of a later mold.

For years, this figure was actually kind of hard to find.  A few of the 1993 repaints (Mutt, Wild Bill and this Flagg) didn't appear with much regularity.  And, lo and behold, this figure is still somewhat tough to find and rather pricey for a 1993.  Mint, complete with filecard figures sell in the $15 range.  But, carded figures sell at the same pricepoint and and even cheaper if the card is damaged.  They are also slightly easier to find.  So, if you want this figure, carded is probably the way to go.  Still, I was shocked to see what prices this figure fetched since he's not an army builder, mail away or vehicle driver.  But, he is a solidly colored figure with top notch gear.  All that adds up to a figure that's worth owning.  Apparently, the collecting community agrees with me, even if it's a silent affirmation. 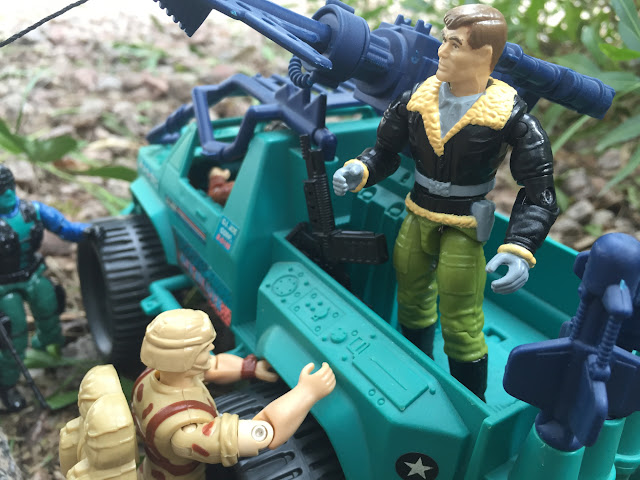 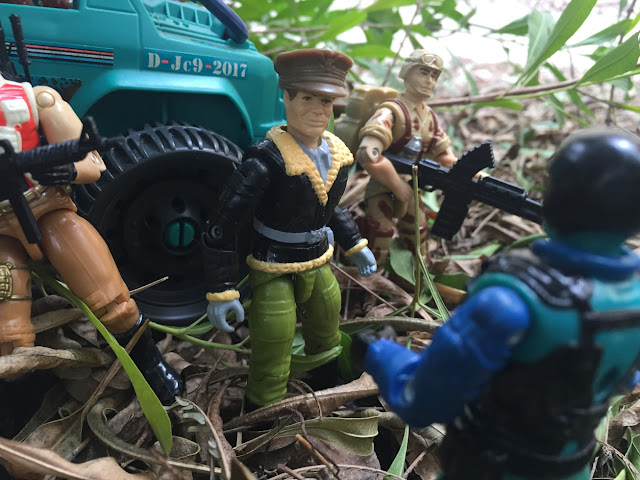 Posted by Robot_Sonic at 3:21 AM
Email ThisBlogThis!Share to TwitterShare to FacebookShare to Pinterest
Labels: 1993, Battle Corps, General Flagg