Ralph McQuarrie was the artist that George Lucas used to help visualize the Star Wars universe.  Many of his concept paintings filled books and helped to increase interest in the ideas behind what we saw on screen.  Naturally, as the Star Wars line was searching for new characters upon which to draw for figure inspiration, it eventually found the McQuarrie concepts fertile ground.  In 2003, a McQuarrie Stormtrooper figure was released to great fanfare.  It was a huge success.  That paved the way for an expanded slate of McQuarrie offerings in the 30th Anniversary Collection that shipped in 2007.  Many McQuarrie designs made their way to plastic action figures.  Darth Vader, Han Solo, Luke Skywalker, Chewbacca and Boba Fett were among the artist's renditions that graced retail shelves.  Hasbro also decided to re-release the 2003 Stormtrooper mold.  Instead of a straight re-release, though, the figure got an updated paint job and was included in the standard figures line.

This figure was sculpted and first released in 2003 as part of the Fan's Choice promotion.  When you consider the era in which he was designed, the figure is quite well done.  He features articulation at the shoulder, elbow, one(?!?) wrist, head, hips and waist.  His knees are not articulated, which limits his movement.  When he was re-released in 2007 in the Thirtieth Anniversary Collection, the sculpting and accessories remained the same, but the paint applications were upgraded.  Unfortunately, the 30th Anniversary figure line brought super articulation to the Star Wars mainstream.  Even boring, collector themed figures were given far more articulation than they could ever need.  So, this sculpt, despite being just 4 years old at the time, was dated from the moment it hit the shelf.

As a figure who would stand on display, this trooper isn't bad.  He can be posed in a few ways that are kind of fun.  But, the complete lack of lower body articulation is really limiting.  By the time this figure was re-released in 2007, super articulated Clone and Storm troopers were standard price retail releases.  You could get this figure or a super articulated movie accurate Stormtrooper for the same price.  So, the figure seemed somewhat lazy.  A new lower body probably could have been cost justified and would have been a welcome upgrade.  But, the fact that the figure still pretty much sold out on sight tells you that extra money spent on a new design would have just been profit that Hasbro flushed down the drain.  Considering the wide array of obscure characters who did get excellently done figures in that time period, I like to think that the money saved on this trooper was spent on something else we would never have otherwise gotten.

As a kid, I bought a few packs of the Star Wars Topps trading cards.  I mostly remember the Empire Strikes Back cards as I bought a few "rack packs" because there were scenes from the Hoth Battle peeking through the cellophane packaging.  In these packs, though, were special artwork cards that showed some of the concept art from the Star Wars universe.  At the time, I really didn't understand these cards as they showed items that were different from the movie.  (I was 6.)  But, this was my first exposure to the concepts that grew into the big screen world I loved so much.  As Star Wars became more of a cultural phenomenon in the 1990's, I was able to see more of McQuarrie's work.  It opened up the Star Wars universe in a lot of ways and was a visual representation that there was more to the universe than we saw on screen.

Looking at this figure, there is a lot going on.  The Stormtroopers still have the standard blasters that would define them.  (But, look at the size of that holster!)  In addition, though, they have a shield and a lightsaber.  Since we have seen lightsabers cutting through blast door level metal in the Star Wars universe in the time since this drawing was made, the notion of a shield to defend oneself in a lightsaber duel seems foolhardy.  But, it does tie the trooper to more of a knight theme and would have made them decent adversaries for Jedi had the universe included them as enemies in great numbers.  The shield itself does feature blast marks rather than sword cuts.  So, it might have been envisioned as a means to protect against enemy fire rather than an opposing swordsman.

Unfortunately for me, whenever I see this trooper wielding his sword, I don't think of it as a traditional Star Wars lightsaber.  Instead, I see the policeman and police robot from Futurama who ignite laser swords and then use them to beat upon suspects with the swords functioning as batons.  So, I see this trooper clubbing someone on the head rather than slicing off an limb.  Even thinking about it makes me laugh.  I don't associate that image with any other lightsaber wielding Star Wars character.  Just this trooper and I don't really know why.

Other than that, I found this figure somewhat disappointing.  There was a time when I wanted to army build these guys and have them patrol the corridors of some unseen playset that I was sure Hasbro would, eventually, release.  After getting one figure, though, the lack of articulation made him more interesting as a collector piece rather than a toy I wished to acquire en masse.  As an homage to what could have been, this figure is excellent.  The sculpting is true to the artwork and the gear is an interesting ensemble.  But, his value is limited beyond that.  Were Hasbro to ever release a fully super articulated version of him, I'd probably buy one.  But, the higher prices of such figures these days and my general downturn in army building tendencies would likely limit him to just one.  So, I'm pretty content with this figure as the sole representative of the character in my collection.

The 2003 McQuarrie Stormtrooper was fairly hard to find at retail.  The leftover "Attack of the Clones" figures clogged the shelves and the lower, non movie year production runs left many army builders short of their desired goals for the figure.  Its repaint and release in 2007 was a welcome relief.  Even in the swarms of retail figures that bombarded stores in 2007, though, the McQuarrie Stormtrooper was a rare find.  They were very popular and the McQuarrie figures tended to sell out  quickly.  This lead to high aftermarket pricing, even while the figure was shipping.  But, time heals most over-inflated prices.  Today, both the 2003 and 2007 figures can be had, MOC for around $7.  (Note that most dealers will ask at least $15 and they will sell them at that price.  Patience is the key with figures like this.)  If you can find them in lots, you can get them for 1/2 that.  Loose figures tend to sell around the same price, just because there is less selection.  But, you will find loose army building lots where you can get the figures for $2 or $3 each.  It's a paltry sum to pay for a figure of this quality.  It's a conversation starter with any collection and that's worth paying, basically, retail price for something that's 10 to 14 years old. 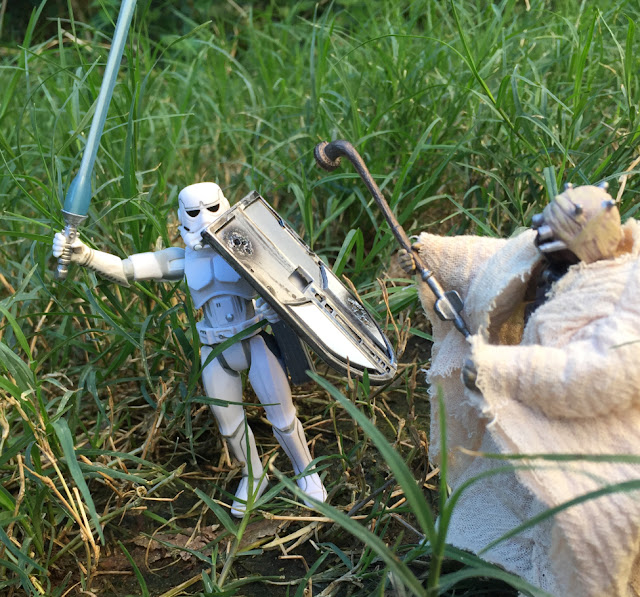 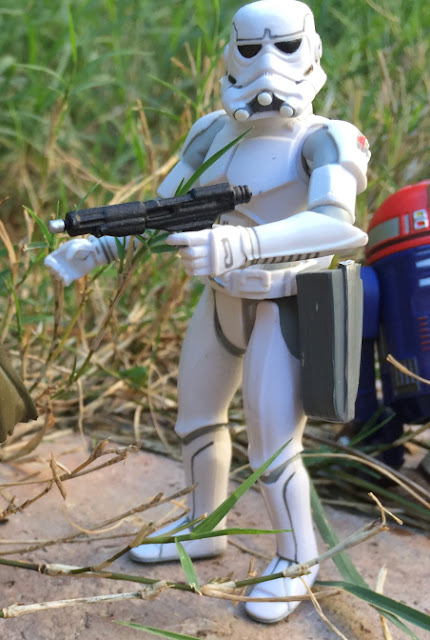 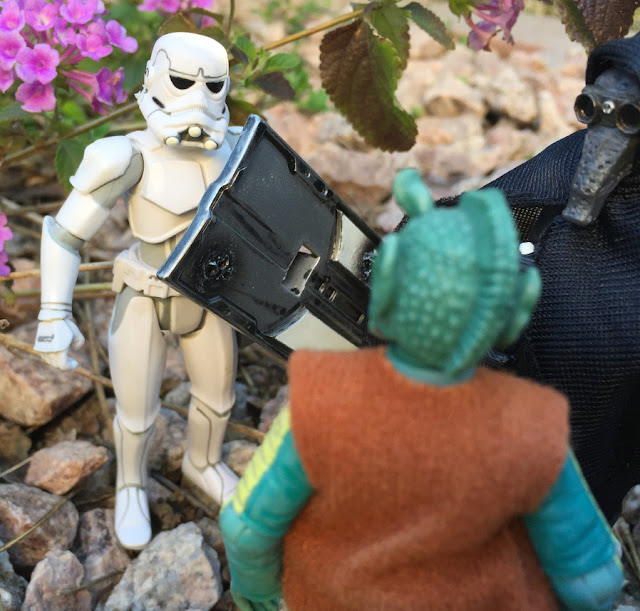 Posted by Robot_Sonic at 2:19 AM
Email ThisBlogThis!Share to TwitterShare to FacebookShare to Pinterest
Labels: 2007, Star Wars, Stormtrooper