The Joe line somewhat rebooted in 1985.  For the first time, Hasbro updated a character design, we saw redundant specialties appear and even the comic went so far as to suggest that the original Joe lineup would be replaced.  That didn't really happen.  But, Hasbro was left with the dilemma of what to do with valuable characters whose figures had outlived their retail usefulness.  1986 was worse.  Dial Tone, Beach Head, Sci Fi, Wetsuit, Iceberg, Leatherneck and Lifeline were all common specialties from prior characters.  (Not to mention the Viper as the upgrade over the Cobra Trooper.)  General Hawk and Roadblock, though, joined Snake Eyes as existing character upgrades.  The trend abated a bit in 1987 (likely due to the movie driving new characters) but both Cobra Commander and Gung Ho were updated.  1988 brought around more redundancy, with only Stormshadow getting the character upgrade.  Then came 1989.

In 1989, there were 10 Joes in the basic carded line.  Four of them, Stalker, Snake Eyes, Deep Six and Rock and Roll were updates of older characters.  Countdown, Dee Jay, Scoop and Recoil stand on their own as specialties and characters that we hadn't seen in the standard, carded lineup of Joes.  Then, there's Backblast and Downtown.  These two figures are interesting comparisons to Zap and Short Fuse.  While Backblast isn't a Bazooka trooper like Zap, he is an anti aircraft trooper carrying a weapon that looks a lot like a modern take on the bazooka.  His head design could easily be an updated Zap based on Zap's comic appearance.  Downtown is even more suspect.  He shares the exact specialty as Short Fuse as a mortar trooper.  Beyond this, he even features blonde hair, just like the Joe's original mortar specialist.  It's possible these two characters might have been planned as updates to Zap and Short Fuse.  Or, the similarities were just coincidence.  But, in Downtown, Hasbro managed to make a really nice figure.

I was out of Joe in 1989.  I had quit after the first couple of months in 1988.  Yet, I still bought the comics.  From them and the cardbacks of the odd figure my youngest brother would still pick up that year, I was able to get a good sense of the figures released.  I thought the '89's looked really nice and would have been a lot of fun to play with.  But, being in high school, that wasn't really an option for me.  However, in the fall of 1989, I recall being moved to the back of the row in Spanish class.  The pretty girl I had talked to every day was moved to the front.  So, bored out of my mind, I started writing a G.I. Joe story using the 1989 characters.  It was a way for them to be part of my collection, even though they weren't.  I filled several pages of a notebook with character sketches and sample action sequences.  Downtown was a key part of the mission, even though he was not in the main force.  He provided the cover for the Joes to escape to the waiting Tomahawk.  This, though, was the end of Downtown's influence on my youth.

When I started collecting again in the mid 1990's, though, Downtown was on the short list to acquire.  1989 figures weren't nearly as common as those from 1987 and earlier.  But, as they were less popular, there was also substantially less competition on lots that were heavy on that figure year.  Within a short time, I had picked up a few lots of mint and complete 1989 figures for an average price of under $2 per figure.  Included in this were more than one Downtown.  With the figure in hand, though, some of the coloring limitations came to light.  Downtown wasn't this nicely designed military figure.  He was aqua blue, brown and red: hardly an eye pleasing combination.  So, Downtown quickly fell out of favor.  It's odd for a figure I had so anticipated to fall so hard.  But, I was acquiring lots of new figures when I first got a Downtown and he simply didn't surpass many of them.  I planned to profile this figure as far back as 2000.  Yet, it took me 17 years to finally get around to it.  That pretty much sums up my feelings on Downtown.

Gear wise, Downtown is loaded.  His mortar is three pieces, a mount, tripod and mortar, that make his signature weapon far more versatile than Short Fuse's original piece.  The mount and tripod allow the mortar to swivel 360 degrees as well as raise and lower.  In addition to this excellent design, Downtown features a massive backpack.  It's surely full of all the survival gear a field trooper could need.  The real reason for this size, though, is so that it can securely stow the 6 mortar shells that are included with the figure, too.  These affix securely to the pegs on the pack and make for an excellent storage design for accessories that would have otherwise been easily lost.  Downtown's final pieces of gear are his helmet and pistol.  The helmet really isn't that special.  It works for the figure.  But, the design is somewhat blocky and odd and it's cast in red plastic.  Downtown's revolver is cooler, though the overall design seems too large and the trigger hole is definitely exaggerated.  But, his overall complement of gear is perfectly matched with the figure and makes for a solid ensemble.

The Downtown mold did not get a lot of use.  After the 1989 release, the mold disappeared until 2004.  Here, it made a welcome appearance as an updated Short Fuze in the Toys R Us exclusive Night Force set.  The paint job is easily the best release of the figure.  But, he included no gear.  Arming him with spare Downtown gear, aside from the red helmet, really brings that figure to life.  The head, torso, waist and legs were then used on the 2007 Convention Starduster figure.  That figure includes a helmet that makes for a better Downtown.  But, the rarity of the release and aftermarket price really aren't conducive to owning spares to make a better Downtown figure.  The mold disappeared after that.  It's a decent amount of uses, especially since the 2004 paint job was actually an upgrade over the vintage version.  But, Hasbro could have included some accessories with the later version and probably have repainted it one more time without too much collector complaint.

Downtown's aren't overly cheap.  Dealer pricing tends to be in the $13-$15 range with lots of sales.  Mint and complete with filecard versions tend to sell in the $8 range.  But, finding one that's complete is a lot harder than paying a couple of bucks more from a dealer.  (Lookout for Windmill pistols with "complete" Downtowns, too.  The accessories are often confused by sellers.)  For an obscure character from a common year that is after Joe's "sweet spot of '82 - '87, that's fairly pricey.  But, the amount of gear and general quality of the figure keeps interest higher than it might, otherwise be.  For me, the figure is great to have around.  Yet, I never use him.  I find that he's tough to visually blend with other figures from his time period.  That limits his photo opportunities and has lead to him being a relatively rare background figure in my collection.  But, the overall design is solid and the figure is definitely worth owning. 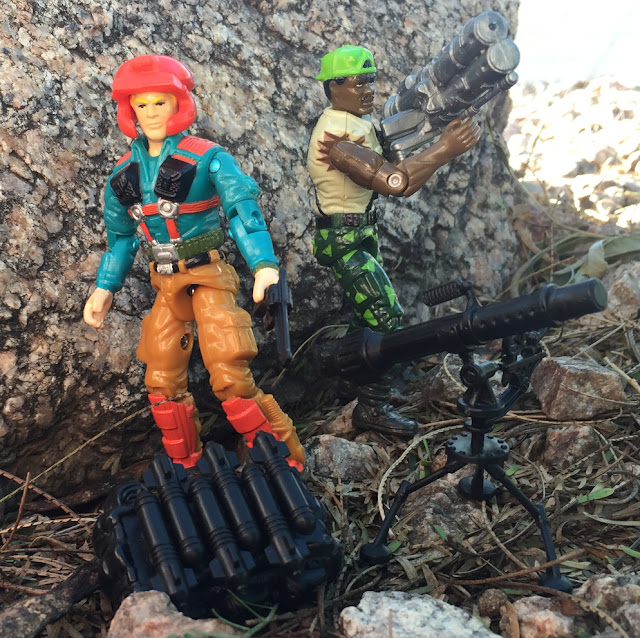 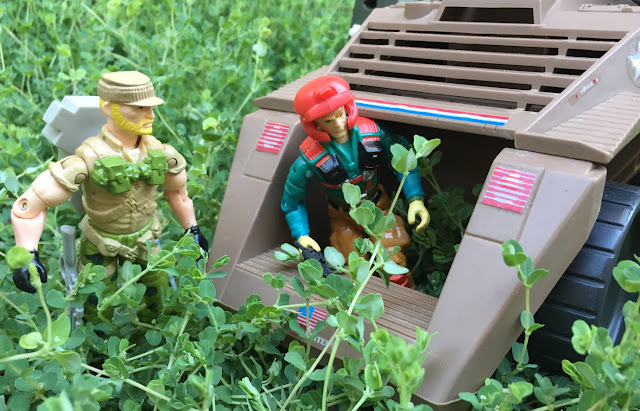 Posted by Robot_Sonic at 2:14 AM
Email ThisBlogThis!Share to TwitterShare to FacebookShare to Pinterest
Labels: 1989, Downtown