I was pretty much out of Joe toys in 1988.  I still followed the comic, though.  And, as such, was familiar with Destro's new Iron Grenadiers faction.  My younger brother got an Iron Grenadier figure and I was enthralled with its design.  But, it wasn't enough to entice me back to toys.  As 1989 dawned, I kept Joe at arm's length.  I still bought the comic and read it.  But, the stories didn't speak to me in the same way that the earlier issues had.  I didn't like the splintering of Cobra and the fact that Destro had gone out on his own.  The 1988 through 1990 comic story lines became a string of largely forgettable arcs for me.  Among these stories was the introduction of Darklon: a distant relative of Destro's who didn't seem to serve much purpose.

The Darklon figure is interesting.  If you start at the head and work your way down, it takes a while for the issues to come to light.  The figure's head is strong enough.  The helmet is odd and weird.  But, that's not bad and it fits the Cobra theme.  His painted, reddish eyes beneath the mask are a spectacular touch that give the head far more depth.  As you move to the figure's torso, the green and black remain quite strong.  Sure, the traditional military colors are more a fit for a Joe.  But, Cobra needed some green and Darklon brings it.  From the waist up, this is really a figure everyone should love.  But, the design completely goes off the rails starting at the figure's waist.  It's red.  And, not a cool, crimson red that would tie to Cobra.  No, it's an off red that simply looks out of place everywhere.  Add to that brown highlights and a golden cluster of grenades on his right boot and you've suddenly got one hot mess of an action figure.

Fittingly, Darklon doesn't see much press these days.  He's a rare participant in Joe photos and isn't often seen on any favorite figure lists.  He's just so odd that he doesn't resonate with collectors.  While his Evader vehicle is a nice match for the Iron Grenadier vehicles, the figure is not.  Darklon simply doesn't match up with any of Destro's other compatriots.  That leaves Darklon without a real purpose.  He's not cool enough to stand on his own.  But, he's so different from other Iron Grenadiers that he doesn't match with them, either.  In the comic, Darklon was selling the Python Patrol technology to Cobra.  If you look at his filecard, you can see that the artists had him in a more python-esque theme with his shirt pattern.  If that had found it's way to the figure, you might have more collectors who viewed Darklon as a Python Patrol member or leader.  But, as he was released, he doesn't work in that capacity, either.

Personally, I have no use for Darklon.  As the figure isn't that good, I have little reason to find a place for him.  And, since I was out of Joe in 1989, I have no nostalgic sentiment attached to the character.  I've found the Bronze Bomber version of Darklon to be somewhat useful.  But, even that figure couldn't survive my collection downsizing of the early 2010's.  So, Darklon becomes a figure I own for completion's sake and little other reason.  His weird gun is kind of fun.  But, it's also so bizarre that it's tough to take it too seriously.  And, it really looks like Darklon's weapon and that makes it difficult to attach the gun to other figures.  So, Darklon languishes in obscurity, even for me.

As a character, Darklon is all but forgotten. He is as a figure, as well.  Hasbro never reused the Darklon mold.  They thought so little of it, they sold it Olmec Toys in the mid 1990's.  Olmec found value in the mold when Hasbro did not.  They released what is probably the best Darklon figure in their 1997-ish Bronze Bombers set.  Crazeblaze, a full repaint of the Darklon mold in dark purple (almost black) and tan is easily a far better figure to represent Darklon in any collection.  If that weren't enough, there is a "good guy" figure in the set who utilizes Darklon's body mold in grey and blue.  He's a great match for a Snow Serpent and can work with a simple Darklon headswap...assuming you can find a cheap Bronze Bomber with which to work.  The mold died with Olmec as they ran into legal problems and was, likely, sold for scrap.  Darklon did see two releases in the anniversary line.  One a convention exclusive and the other a club exclusive.  Both figures are overly expensive and not great alternatives when you consider what else you could get with that kind of money.

Dealers sell mint, complete with filecard Darklons in the $16 range.  But, left to the open market, you can get them for just a hair under $10.  Sacrifice the filecard, and you can get them for $6.  You can still get mint in bubble figures for around $12, too.  For a figure that's susceptible to paint wear and breakage, that's not a terrible price.  But, Darklon is a terrible figure.  So, he's never going to be overly popular and will pretty much remain the lost member of the Iron Grenadier fraternity.  The upside is that you can add a bizarre enemy figure to your collection for peanuts.  The downside, though, is that you have a figure that really doesn't fit anywhere. 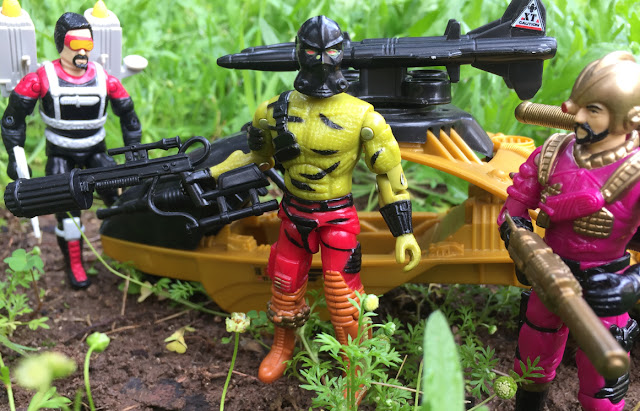 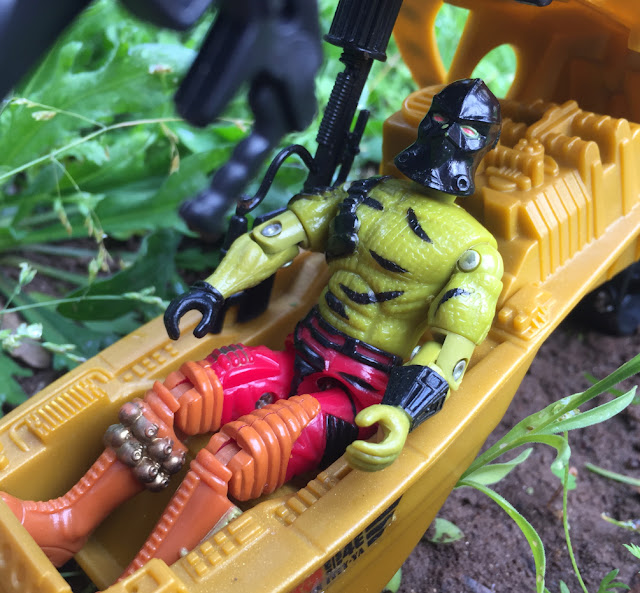 Posted by Robot_Sonic at 1:36 AM
Email ThisBlogThis!Share to TwitterShare to FacebookShare to Pinterest
Labels: 1989, Darklon, Iron Grenadier, Vehicle Drivers