At the 2003 Convention, Hasbro announced that Toys R Us would carry a six pack of Cobra Troopers as their 1st Quarter, 2004 exclusive.  This gave collectors great hope that Hasbro finally understood army building and that future TRU sets would be the army building bonanzas of which collectors had always dreamed.  When the first news of the 2nd TRU exclusive set leaked, a Cobra Urban Strike set, collectors imagined six urban specific army builders: maybe Alley Vipers and Headhunters with no characters to be seen.  Then, the specifics of the set came out.  It had three army builders and three named Cobra characters.  Immediately, collectors were angered over the poor character assortment and many wrote the set off due to Scrap Iron, Stormshadow and the focus of this profile: Firefly.

This, though, was a mistake.  The 2004 Urban Strike set was actually extremely well done.  The army builders in the set were all great.  The Stormshadow was a cool paint job: but of a bad mold.  It was good to see Scrap Iron again.  But, the lack of accessories and too similar to the vintage coloring didn't do him any favors.  Firefly, though, was the class of the set.  But, because collectors were burned out on Firefly after Hasbro had used the mold too many times, the amazing figure that was included for the Firefly character was largely ignored.  So, the Urban Strike set languished.  It was even discounted from $20 to $15 in Toys R Us stores.  This was the first real sign that the Joe line was already in trouble after a tremendous 2003 and was a harbinger of the line's impending decline into cancellation over the next year.

As for Firefly, though, Hasbro dropped a convention quality figure into a retail release.  While the TRU sets were mostly known for poor accessories, the level of paint application was, usually, pretty strong.  This Firefly, though, includes his full array of gear.  And, on top of that, he features a full seven colors on the figure mold.  The selling feature is that Firefly's base is Cobra blue.  It's the only Firefly ever released with blue as part of his color scheme.  This immediately allows him to better integrate with classic Cobra Troopers and Officers.  He also heavily utilizes grey and black.  So, you have an homage to his original release, too.  The figure is adorned with rich brown details that make his straps and pouches appear to be leather.  It's a subtle feature that makes the mold pop even more than it did before.  You can fully see the details of the Firefly mold that even the vintage version left unpainted.  Toss in some white, flesh, silver and red and you see the amount of color that Hasbro used to give this figure a chance to be appreciated by collectors.

The figure might be taken as a little busy by some.  There is a lot going on with the overall coloring and camo.  The real black mark against this Firefly, though, was that it was too much, too quickly.  But, almost 14 years after his release, I find that this is pretty much my go to version of Firefly if I'm not using the vintage version.  He meshes well with many Cobra army builders and even looks good among the vintage Cobra hierarchy.  The full complement of gear also gives a sense of legitimacy to the figure.  In short, it feels that Hasbro gave Firefly his due with this release, even if other figures in the set were shortchanged on paint applications or accessories.

For me, this figure wins on a couple of points.  First, it's a great look for Firefly.  If Hasbro had to repaint a character nearly 10 times, I'm glad they offered at least a couple of versions that were of great quality.  Secondly, though, 2002 through 2004 was a pretty good time to be a Joe fan.  You could walk into Toys R Us stores and find the Joe exclusives without too much trouble.  The sets were readily available online, too, for collectors who didn't live near a TRU store.  And, while a lot of the releases weren't Hasbro's best work, there were a lot of good figures that did see release.  Hasbro was releasing over 100 figures per year back then.  So, it was very easy to find something that appealed to every collector.  In some ways, Hasbro's attempts to be all things to all collectors backfired.  But, when they took a more focused approach in the anniversary era, the results were actually weaker than they had been in the early 2000's.

Like all the Urban Strike figures, Firefly has an unreleased variant.  The unproduced Firefly uses more red as a basic camo color.  In the grand scheme, it's a vastly inferior figure to the one that was actually released.  What was once a common variant to find, though, has gotten rather tough to track down and overly pricey.  It's not a great figure to own.  But, if you're looking for something different that will set a Firefly collection apart: it's definitely something that's different and relatively rare.

Hasbro used the Firefly mold too many times.  In their zeal to capitalize on a fan favorite character for whom they had the mold, they gave us too much of a good thing.  The 1998 version was an awesome repaint since it moved Firefly into an environmental theme.  The 2000 figure was less great.  The cammo was good.  But, the bare hands and paint wipes didn't do him any favors in the long term.  The 2002 version is so terrible that it's fun.  The 2003 Convention figures are excellent.  But, are hard to find and will cost you quite a bit of money.  The Tiger Force Wreckage figure is interesting and a cheap way to get another Firefly in a different scheme.  The 2005 Crimson version is just this Urban figure with the blue replaced with red.  And, the 2005 Comic Pack figure has a pretty good argument as the best overall Firefly figure of all time.  In between that, there is also a Funskool release and all the slight variants that accompany any vintage Funskool figure.  Collectors have their pick of Firefly figures.  I think this version is great.  But, realistically, can only rank it as the third best Firefly figure.  But, it is nice to have a Cobra blue version that can blend with more classic Cobra troopers.

Urban Firefly figures have gotten somewhat tough to find.  Dealers routinely get between $10 and $15 for a mint and complete figure.  You don't fine too many open market sales.  But, that's because the figure doesn't generate much interest in that regard.  If you can find such an opportunity, you might pick up this figure for under $5.  Hasbro's overuse of the mold rendered this version superfluous and pretty much killed any aftermarket demand for the figure.  That means, though, that a patient collector can get an excellent Firefly figure (maybe the best) for a pittance.  I never scoff at quality figures that are cheap. 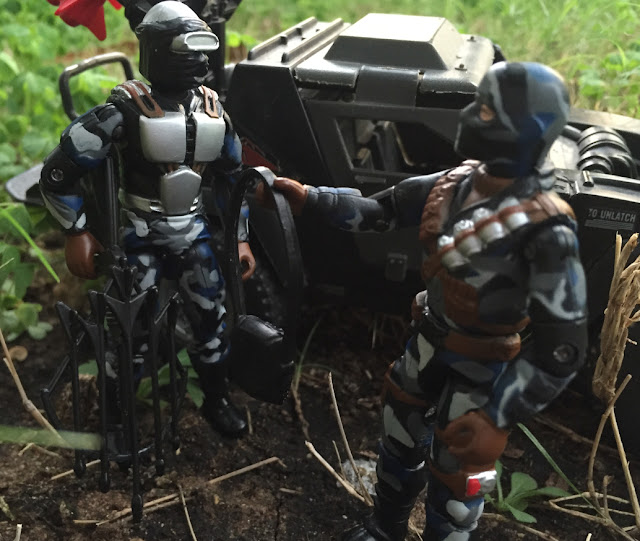 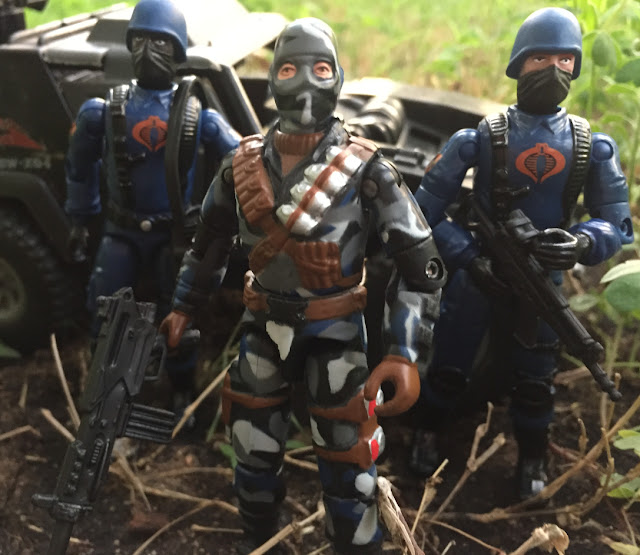 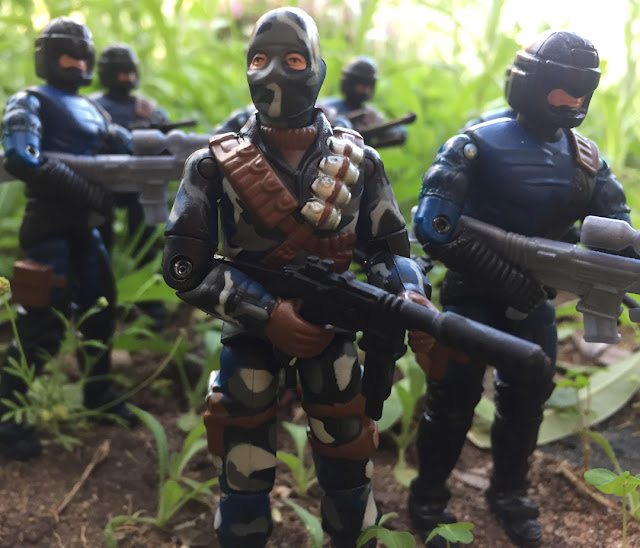 Posted by Robot_Sonic at 2:49 AM
Email ThisBlogThis!Share to TwitterShare to FacebookShare to Pinterest
Labels: 2004, Firefly, Retailer Exclusive, Urban Assault