Light blue plastic sucks.  It sucks because, while it can be a useful color to represent things like jeans, it tends to fade, discolor or turn brittle.  All of these things are heavily evident upon G.I. Joe figures produced in the 1980's that used the light blue colored plastic.  In some cases, though, foreign toy companies were able to surpass Hasbro by using different plastic mixtures.  Some whites stay white.  And, some blues stay blue.  You still see odd instances of massive discoloration.  But, many times, the foreign figures hold up better than their American originals.  Such is the case with the Funskool Buzzer.  When Funskool first re-released this figure in 2002, it had been 17 years since the release of the U.S. version.  Now, it's been 17 years since the release of the most heavily imported Funskool Buzzers.  Most of them are holding up very well.  Though, it's also a relative case of selection bias since most of the Funskool Buzzers that showed up in 2002 through 2003 were held by collectors and well cared for.  Regardless of this, the Funskool release also gives me a chance to revisit the one Dreadnok character that I really enjoyed as a kid: Buzzer.

For me, Buzzer was the only Dreadnok who had any long term usage.  While Ripper and Torch were turned into nameless minions who would easily die in firefights, Buzzer remained a viable Cobra character.  Most of this stems from issue #35 of the comic when Buzzer tried to take command of the team and stole Zartan's motorcycle.  This gave Buzzer more depth since he wasn't just some brainless thug who wanted to perform violent acts.  Buzzer's actions had more purpose.  (Issue #30, though, proved he could be an idiot, too, when violence overtook his sense of judgement.)  Buzzer being smart helped keep him around.  Often, I would pair him opposite of Zartan.  But, in my world, Buzzer was a fighter and not a gang member hell bent on wanton destruction.

Much of this was based on the comic appearance of Buzzer.  However, some of it was also a function of Buzzer's look and his gear.  Of the three original Dreadnoks, Buzzer was the most "normal" looking.  He had a pony tail and didn't wear sleeves.  But, that was superior to the more bare chested looks that both of his team mates tried to pull off.  While Ripper's gear was probably better than Buzzer's, I found Buzzer's to be the most fun.  Buzzer could slash away with his blade on a chain and easily cut down close quarter foes.  He found himself a foil to Quick Kick where the blade would battle Quick Kick's nunchuks.  The chainsaw could be used with great effect against opponents in similar quarters.  He could also damage Joe vehicles and planes.  And, since Buzzer didn't have a long range weapon, he was easy to assimilate into the Thunder Machine or other Cobra vehicle.

For that reason, Buzzer lasted in my collection for a good many years.  We even had more than one of him as I used his torso with a Duke head to create one of my early custom figures.  Even into my final days of play in late 1987, Buzzer had relevance.  He would ultimately side with Zartan when my personal Cobra hierarchy split.  Due to the poor condition and long gone axe, though, when it was time to pack my Buzzer away, he didn't get much care.  In the mid 1990's, when I had just a small box of Joes that I had salvaged from various boxes of old toys from our house, Buzzer was among the figures I found.  The blue pants had long ago faded to a ghost of their former selves.  But, the character lived on and was among one of the few 1985 figures that I definitely wanted to replace as I became a collector.  This Funskool version has given a more vibrant variant of the character I found at a Sears store in December of 1984.

It's hard to believe how long it's been since the Funskool imports started showing up.  I logged onto my work computer one morning in February of 2001 and found that East Coast collectors had already pounced on the announcement that YoJoe.com was selling Funskool figures for $5 each.  I bought a few stragglers.  But, by the summer of that year, there were multiple Funskool sellers and the competition drove the prices down to $4 each.  Over the next few years, Funskool figures were heavily imported...so much so that figures like this Buzzer got oversaturated and eventually found themselves on clearance as the Joe world died out in the late 2000's.  Seeing people fawning over figures that sat unsold for $4 is tough to see.  But, many of today's collectors weren't around in the early 2000's and are unaware that these Funskool figures were sold by many dealers for cheap prices and even, in some cases, pegwarmed.  The fact that something doesn't appear all that often for sale is very different to it not being available.  And, there are still collectors with boxes of cheaply purchased Funskool figures sitting in their storage areas: completely unaware that the extras they bought for army building or custom fodder have now found grotesquely increased value.

Buzzer got a good amount of use.  While the mold saw just one vintage release, Funskool released the character for many years.  There are many Indian variants.  Some are incredibly rare and very expensive.  Others are almost indiscernible from this common 2002 era figure and sell for peanuts.  If you are a Funskool collector, there are likely enough variants to keep you busy for a while.  In April of 2003, Hasbro re-acquired the Buzzer mold.  He immediately went into a 2004 convention set where he was released with his full gear.  (This proved that Funskool likely returned all the accessory molds with their figures molds and Hasbro just chose to not use them on their retail releases.)  In 2005, Buzzer was given a new head and released in a comic pack.  There are 4 major Buzzer variants to track down (Red Funskool, Blue version (Hasbro or Funskool), Convention and Comic Pack.)  Each has value and is useful for the Buzzer character.  But, looks based on his 1985 appearance are the most popular and useful.  So, this Funskool version remains a viable option for anyone looking to get a classic Dreadnok into their collection.

The upside of the 2000's era Funskool releases was that the figures based on their original coloring often included vintage accessories.  It was really only the final Funskool releases that started to deviate from the original gear.  So, Buzzer includes his chainsaw, gas can backpack and chain axe.  As the axe was something I quickly lost as a kid, I always hold it in high regard.  So, it was always nice to get the full array of gear with Buzzer.  And, yes, I know he's not holding his chainsaw "correctly" in any of the photos below.  But, that is how I've had Buzzer hold his saw since I first opened my Hasbro version in December of 1984.  And, my Buzzers will hold it that way until my decendents find pools of blue and tan goo inside an acid free baggie in 60+ years.

Funskool Buzzers come in a couple of flavors.  And, that flavor defines the pricing.  The Funskool Buzzers made between 2002 and 2003 are pretty cheap.  You can buy carded versions for under $20 and still find loose, mint and complete figures for under 1/2 that price.  Earlier carded Buzzers might command a premium.  But, loose versions are difficult to differentiate from their later counterparts...unless there's a significant variant.  Funskool released a red vested Buzzer with dark hair.  That figure will command hundreds of dollars.  But, it's also rare and was long out of production before massive Funskool imports to the U.S. began.  So, if you want the subject of this profile, he's cheap and easy to find.  U.S. dealers clearanced him out and that's still affecting his pricing today.  At some point, though, that will change.  And, you may wish you'd acted on the Funskool Buzzer availability.  Until then, the figure is useful, but not necessary if you have a Hasbro version of the character. 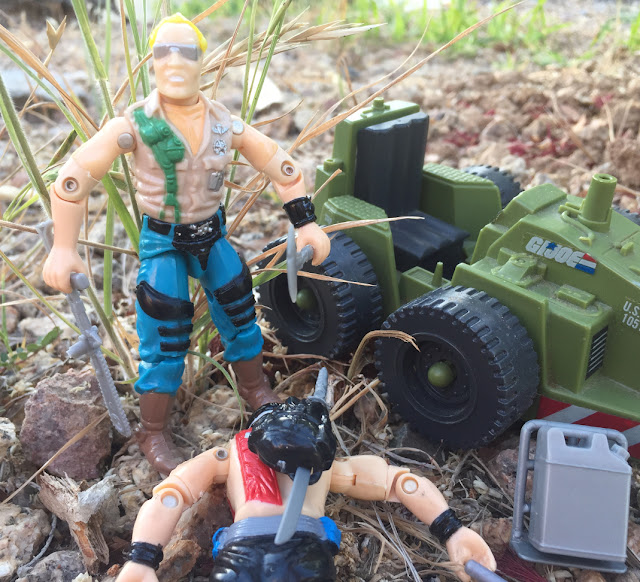 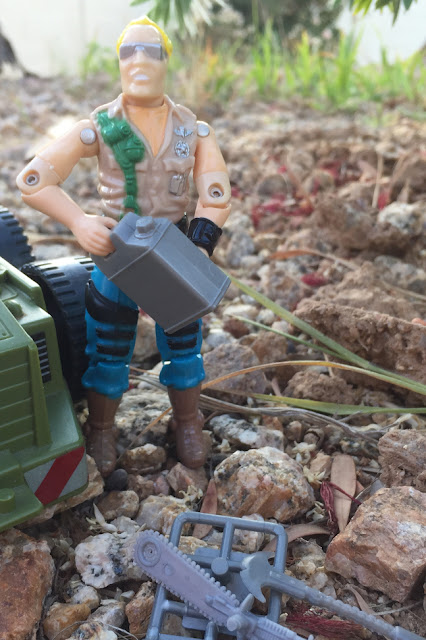 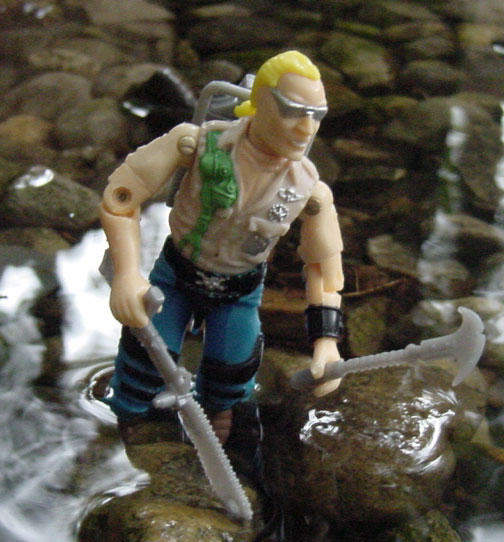 Posted by Robot_Sonic at 12:33 AM
Email ThisBlogThis!Share to TwitterShare to FacebookShare to Pinterest
Labels: Buzzer, Dreadnok, Funskool