I bought my first Joe comic at a drug store in June of 1984.  I immediately sent away for a yearly subscription to the book.  My first issue received through the mail, #29, arrived in August of 1984, a few days after it had shown up on the comic rack at said drug store.  As September arrived, school started again.  I hadn't seen much of my friends that summer as we lived fairly far from my school and pretty far away (in kid terms) from any of the kids in my class.  So, it was great to be back in class and have recess and down time to discuss the latest Joe comics with friends: both good and casual.  The first comic to arrive for that school year was #30: Darkness.

Darkness starts with the cover of the Dreadnok Buzzer slicing the tail off of a Skystriker while Ripper and Torch do additional damage on the ground.  It's a striking cover, full of action.  And, it shows the bad guys actually "winning" in that they are destroying the good guys' equipment with no Joes in sight.  The story inside actually pertained to the cover, too.  As a kid, it annoyed me when the cover was a tease and unrelated to the events of the comic behind it.  So, it was cool to see the Dreadnoks in action inside.  (The beat up version you see if my original copy I got in the mail back in 1984.  It hadd a good life.) 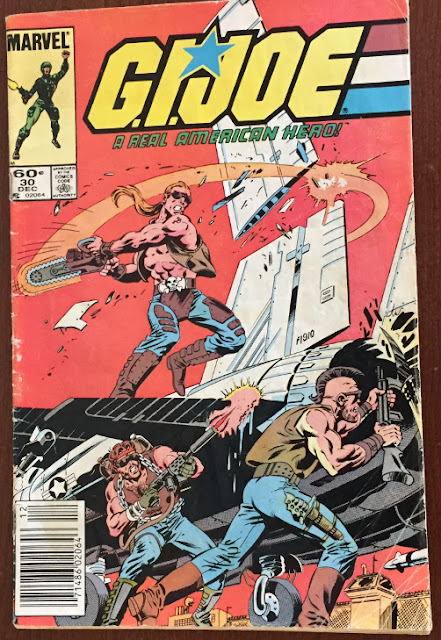 The basic plot is that Zartan and the Dreadnoks convince Cobra Commander that the secret Joe base is on McGuire Air Force Base.  Learning his lesson from the failed frontal attack in G.I. Joe #19, the Commander opts for a small strike force to carry out a sneak attack.  The premise is rather weak, but it helps contain the action.  The memorable item from the early pages is Zartan turning himself into Hawk and interacting with the Joes.  The scene was somewhat recreated in a convention exclusive 3-pack of figures in 2004.  It was an imperfect homage.  But, those figures were meant to invoke this early use of Zartan's disguise capabilities. 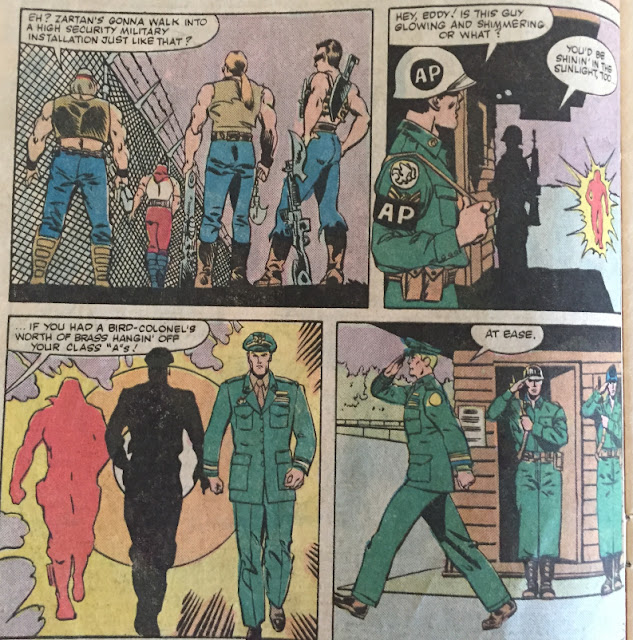 There's a couple of things of note in this issue.  First and foremost was the introduction of the Hiss Driver.  For some reason, the comic never showcased the unique driver of Cobra's iconic tank: despite the fact it had been in the comic for year at this point in 1984.  And, they weren't Hiss Drivers.  Instead, they piloted the SNAP helicopters.  The SNAP choppers are actually FANGs.  This, again, is odd since the FANG had appeared in lots of issues on the comic in the previous 18 months and there was really no reason for them to get the vernacular wrong.  But, here you have Hiss Drivers flying misnamed helicopters.  Nothing is more Cobra than that. 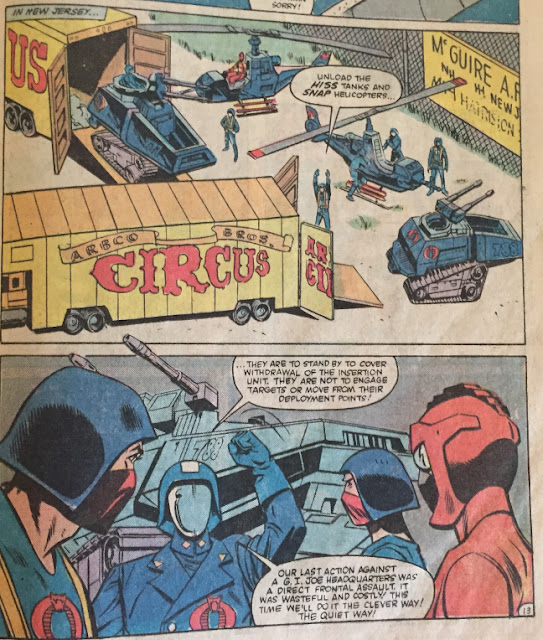 Billy also makes an appearance in this issue.  He is caught by Major Bludd and the Baroness as he rifles through Cobra records.  This begins the Billy assassination attempt on Cobra Commander plotline that would culminate a couple of months later with the revelation that Cobra Commander is Billy's father.  As a kid, I didn't much care for the Billy storyline.  While I liked some of the intrigue within Cobra, I didn't care for the Billy character.  In G.I. Joe #10, he worked as a plot device.  But, I'd have much rather that Kwinn or Dr. Venom had survived into the later issues rather than Billy.

Of course, the Dreadnoks muck up the attack by alerting the authorities after they destroy a Skystriker.  This brings the Joes running and they quickly defeat the small Cobra force.  Cobra Commander returns to lick his wounds and the story deverts back to Snake Eyes for the next couple of issues.  One point that sticks with me, though, is how well the story between the early comics moved along.  There were elements of the issue that would come back later and loose threads from prior (and later) issues would come together as the year ended.  This was why I found G.I. Joe such compelling reading.  There was always an open plot to get you to come back.

No look at a comic from 1984 would be complete without the ads.  The most notable entry in this issue was a full two page spread from NBC showcasing their Saturday morning lineup that would have started airing the month this comic was released.  You see the classics such as Smurfs, Alvin and the Chipmunks and the Amazing Spider Man.  But, there are also completely forgotten shows like Kidd Video, Pink Panther and Sons and Going Bananas.  As a kid, I'd flip between the three channels on Saturday morning to find the shows I liked.  I watched some Mr. T, Alvin and the Chipmunks and Spider Man and His Amazing Friends.  The notion of a kid friendly cartoon lineup being a weekly event is so antiquated that my kids can't even understand the concept that we didn't really have a way to watch a show whenever we wanted.  It's completely foreign to them to not have whatever entertainment they want at their fingertips. 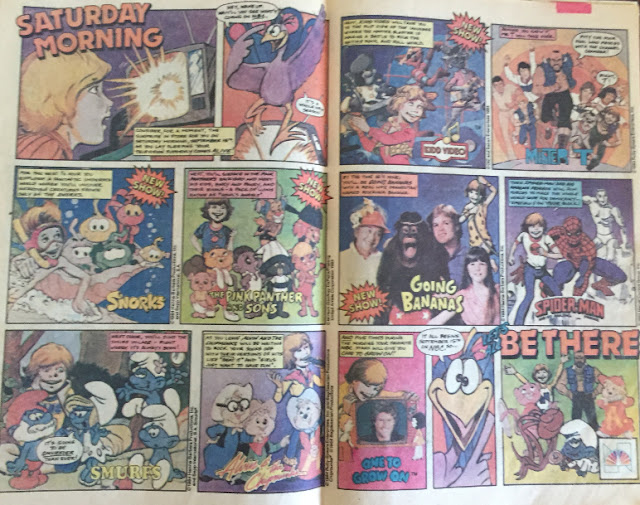 Like pretty much all comics released by major publishers in the 1980's, G.I. Joe #30 is worthless.  You can get a mint copy for a couple of bucks.  The issue was reprinted through the years and you can find those with relative ease for even cheaper.  It's too bad that Hasbro never looked at this issue for a comic pack.  While it would have been a way to get the Dreadnoks out (they appeared with a later issue comic) it would have also been a good way to release an updated Hiss Driver (whose mold they had at the time) or another Joe character.  I'd have preferred either of these offerings to the Thrasher figure that was included in the later pack.

This issue really is the harbinger of the year to come for me.  As I was back in school, all the events of the comic were points of discussion and the basis for many Joe adventures.  The fall of 1984 was an awesome Joe time as some new kids had just moved in down the block and I had someone nearby to play with every day.  It was through them that I first saw the Dreadnoks in December of that year and was blown away by the amazing offerings coming in 1985.  The Joe mini series cartoon aired this month and introduced Shipwreck, Lady Jaye and Flint, too.  So, while I was enjoying Stormshadow, the Whale and even new Dreadnoks, I had great anticipation for what 1985 would bring.

I've completely lost that season wonder as an adult.  Now, I'm happy when school starts since it's a much easier routine with my boys.  But, the fall and holidays bring work and planning instead of overwhelming anticipation.  I don't see a unifying set of toys that resonate with kids today.  Even among my three boys, each has a specific toy interest that bears little in common with their brothers.  The idea of a one or two toy lines dominating a generation is pretty much gone.  In some ways, that's too bad since you could pretty much bond with any kid over Joe or Transformers in 1984.  But, my kids are also exposed to a much broader array of items and have a greater spectrum of toys than I ever did.
Posted by Robot_Sonic at 8:18 AM
Email ThisBlogThis!Share to TwitterShare to FacebookShare to Pinterest
Labels: Buzzer, Dreadnok, Marvel Comics, Ripper, Torch