In the beginning of 1985, I was in competition with a couple of my friends to find the newly released Joes.  At various points, one of us pulled ahead of the other.  But, usually, we all found the same figures around the same time.  And, realizing that the end game was that we all had the same stuff, the quest turned more to finding a figure first.  My most famous find was when I came across a recently opened case of figures at the local Toys R Us store on the Friday afternoon that Spring Break began in 1985.  From it, I plucked a Snake Eyes.  None of my friends would find him for months.  But, luck struck again a few weeks later when I came across a Lady Jaye at the local Target store.

We all knew Lady Jaye from the 1984 cartoon series.  Her figure, along with Flint and Shipwreck, was one of the most anticipated 1985 releases.  She made a cameo in the final comic (#33) of 1984 and then took a starring role in the first issue released in 1985.  Upon finding her figure, though, I was somewhat shocked at her appearance.  Gone was her signature javelin quiver.  The rifle was still there.  But, it seemed empty.  More glaring, though, was that the figure was wearing a hat.  She had never had a headcover in the cartoon.  So, the look was jarringly different from the character we had come to know.

This wasn't all that relevant for me, though.  You see, the Sunday before we found Lady Jaye, I came across a Dusty figure at the local KB store.  I begged my parents for him and even promised to not ask for any more figures for a while.  They bought him for me.  So, when I found Lady Jaye and the Snow Serpent (the last figure for whom we learned the code name in 1985) at that Target, my younger brothers each got a figure and I did not.  As Lady Jaye belonged to one of them, she didn't quickly join the various adventures I played out in my room each day after school and right before bed.  Losing this crucial time when the figure was new somewhat limited Lady Jaye for me.

The other thing that soured me on the figure was that I had two friends who simply loved her.  Annoying loved her.  Not only would she be their first choice for a mission, but they would endow her with super powers and make her an unbeatable superwoman.  Playing with others who took this tact got tiresome and left me uninterested in Lady Jaye.  My frustrations with them were transferred to Lady Jaye and she never managed to take off as a viable character in my Joe world.  Even now, she's not really a figure I tend to display with my other 1985 figures as I see her as somewhat out of place with my childhood favorites.

As a figure, Lady Jaye works well enough.  She is a somewhat bright green.  One of the great things about the vintage Joe line was that the designers had an eye for how the figures would appear when randomly stocked on store pegs.  They made sure to choose complementary colors and not create too many figures that looked like one another and would be indistinguishable from one another.  This allowed kids to quickly recognize the figure they were seeking.  So, Lady Jaye uses green.  But, it's a different green from Flint, Footloose or Alpine.  This keeps her "military-esque" and makes her more visually distinctive than releases from when Hasbro foolishly abandoned this practice in the 2000's.

Lady Jaye's gear isn't all that interesting.  But, it is definitely essential to the figure.  The harpoon gun is Lady Jaye's and Lady Jaye's alone.  It looks perfect with the figure and doesn't really work with any other figure.  Her backpack is scaled to Lady Jaye's sculpt and, again, works well with her while also not really working with any other figures.  Her final piece of gear is a video camera.  It's comically dated now.  But, in 1985, something so small was novel.  And, as a kid, I found more uses for the camera than I did even Lady Jaye herself.  It found itself a vital piece of equipment for spying on Cobra, taking video of the Dreadnok nefarious deeds or even catching a Joe double agent at work.  The camera found its way into the hands of many figures while the rest of Lady Jaye's gear really only works for her.

Lady Jaye had little first life, a somewhat chaotic second life and then a collector based final life before the mold was retired and replaced by a completely new one.  Hasbro released just one Lady Jaye in 1985.  From there, the mold went to Funskool.  She was released in India for many years in the mid 1990's and has several minor variants of body shading and accessory colors.  Funskool also used her for the Canary Ann figure in the Complan Commandos line.  Hasbro got the mold back for the 1997 anniversary figures and released her in an excellent black and grey paint job.  The body was used again in 1998 with a less than stellar head as the new character Volga.  Despite collector demand for Lady Jaye, Hasbro didn't use the mold again until 2003 when she appeared as a Convention release.  This was the final usage of the original mold.  In 2005, Hasbro created an all new body mold that was used on Daina.  It was used again on the 2006 Comic Pack Lady Jaye and the 2007 Convention Doc.  For a character as popular as she was, Lady Jaye really didn't get many releases.  Scarlett and Baroness dominated the slots for female characters in the 2000's and Lady Jaye was really neglected.

There was a time when collectors believed that because Lady Jaye was a female figure that she existed in drastically lower numbers than other figures.  Time has proven that if that was true, it has had no impact on the figure's availability today.  There are always tons of mint, complete and with filecard Lady Jaye figures available.  They sell anywhere from $15 to $30, with the bulk of them in the $25 range.  That's a lot.  But, there aren't a lot of other options for the Lady Jaye character.  And, the original version is easily her most iconic look.  I'm not a huge fan of this figure.  But, I'm also not as against it as I was in earlier days.  Lady Jaye has her place in the collecting pantheon.  But each collector finds her useful or not.  I'm glad I have one from my early collecting days.  But, I'd also not miss her were she absent. 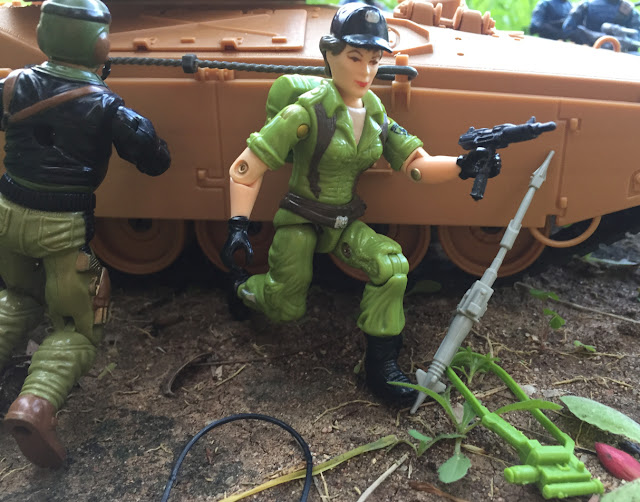 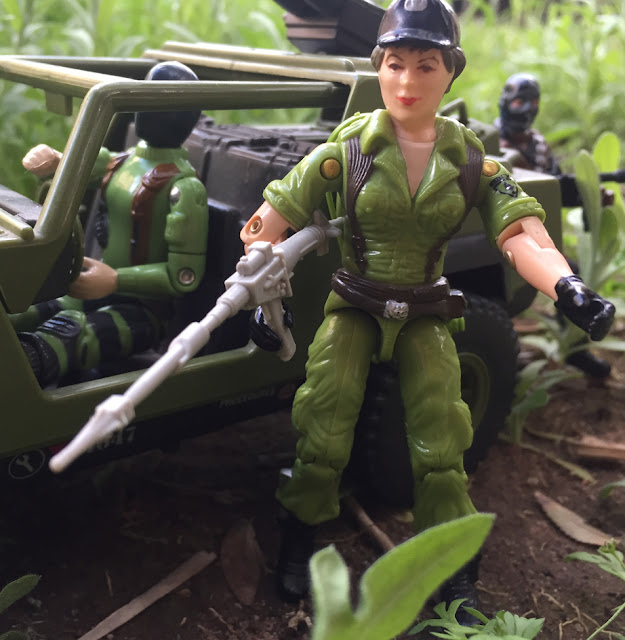 Posted by Robot_Sonic at 1:58 AM
Email ThisBlogThis!Share to TwitterShare to FacebookShare to Pinterest
Labels: 1985, Lady Jaye